Amongst the big names in the upcoming 2012 OFSAA AAAA Boys Basketball Championships is Jamal Reynolds of the #4 PineRidge Pumas who claimed the LOSSA championship with a 86-54 beating of Notre Dame. Reynolds has been on tear this season putting up incredible numbers and comes in averaging over 43 points in league play.

According to Head Coach Cam Nekkers, a former CIS player with the Brandon Bobcats, Reynolds is amongst the brightest players in this year field.

“He’s the best basketball player I have ever coached at Pine Ridge. He’s incredible,” said Nekkers. “There haven’t been a lot of American scouts talking to me and that I’m really shocked at. He has done things that nobody in Durham has done since Devoe Joseph in high school basketball.”

Joseph, a Pickering grad, went on a basketball scholarship to Minnesota before transferring to Oregon.

Reynolds had 25 points or more in 30 of Pine Ridge’s 40 games this season, said Nekkers, and poured in more than 50 points three times and over 40 at least 10 times. He averaged 43 points a game in league play this season. 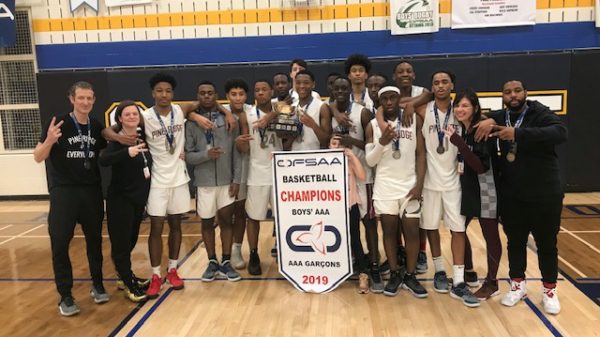 Hamilton, Ont — In what will surely go down as one of best finishes in Ontario Federation Schools Athletic Association (OFSAA) basketball history, senior...