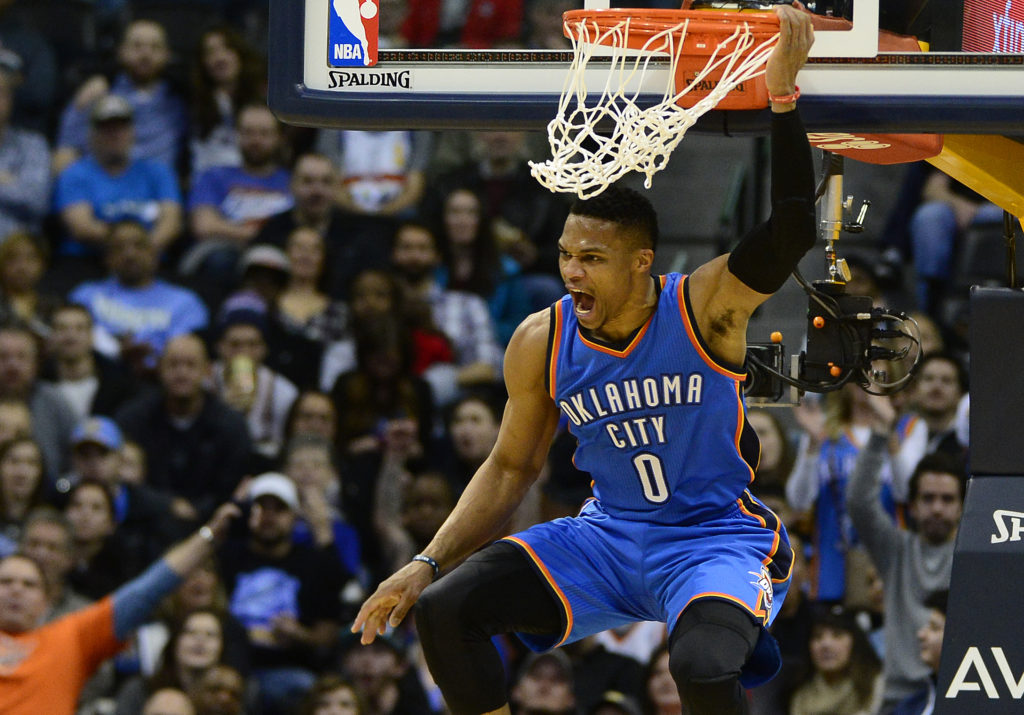 Epic emotional decisions makes us want to dedicate another one to the Land. But either way LeBron James will still be King. But after the Cleveland Cavaliers made history last season will anyone come back from 3-1 down again? Sure there will be battles before the Warriors win the war and Dub Oakland as the Golden State once again. Even if their big free agent deciding factor of Kevin Durant looks to take them over more than one bridge. But put it this way aside from Klay Thompson and Draymond Green, if OKC kept Durant and traded Westbrook for Steph Curry wouldn’t you have the Thunder reigning as champs? With this fantastic four franchise instead you have a dynasty of Marvel proportions.

Sorry Steph. Sorry Kev. You can have the championship, but not the individual accolades. Besides this is about a “team” right? You will have to settle for the ones you already have. The winners of the last three MVPs will have to clear the lane-just like everyone else-for the man who should have got his last year. Contracts aside Russell Westbrook deserves more and this is the year his storybook season takes it all.

Rookie Of The Year

Ben Simmons debut debunking injury doesn’t confirm it, Brandon Ingram’s play does. The Duke raised, post-Kobe takeover ready rookies future as the face of the associations most storied franchise not from New England sees him as this years rook most likely to become a superstar in the league. His time couldn’t be any more right now on the shot clock. They’re already comparing him to Kevin Durant. And you thought K.D. was the big lottery ticket of this offseason?

Defensive Player Of The Year.

Once, twice, three times a DPOY! You could call this selection lazy but it’s not another Steph vote. It’s a truly Most Valuable one. Just call him the new Small Forward Ben Wallace, if you’re not calling him the ‘Bron stopper. Sure our next choice below is pretty close to this award, but in all reality do you really see anyone getting past Kawhi Leonard? Literally.

Most Improved Player Of The Year

Poised for a breakout year bigger than his one last season now Durant has left him all alone on his frontcourt island, Steven Adams is going to take care of all of that garbage. Give this Kiwi a jumper (even though its Summer in New Zealand right now) and he could be an All-Star. He’s even our pick for Defensive runner up. Now that sounds like an improvement.

Sixth Man Of The Year

Out in L.A. Clipper Jamal Crawford is your ‘Sixth Man Of The Decade’ so he doesn’t need another year again. Whilst in Lakerland the purple and gold have two Sixth Men spark plugs in Nick Young and Lou Williams microwaving each other like corn until they pop. We move to Indiana where an underrated collated roster keeping pace with MVP predicting Paul George means we might just see the old Monta Ellis find his place off the pine.

Coach Of The Year

Steve Kerr’s understudy Luke Walton could be a favourite soon if he really makes all these post-Mamba lottery pick Lakers the best young team in the L, no matter how many times they see that letter. But in his interim isn’t it time former teammate and fellow Rookie coach last year Tyronn Lue finally gets his due? Don’t treat him like The Answer. No question!