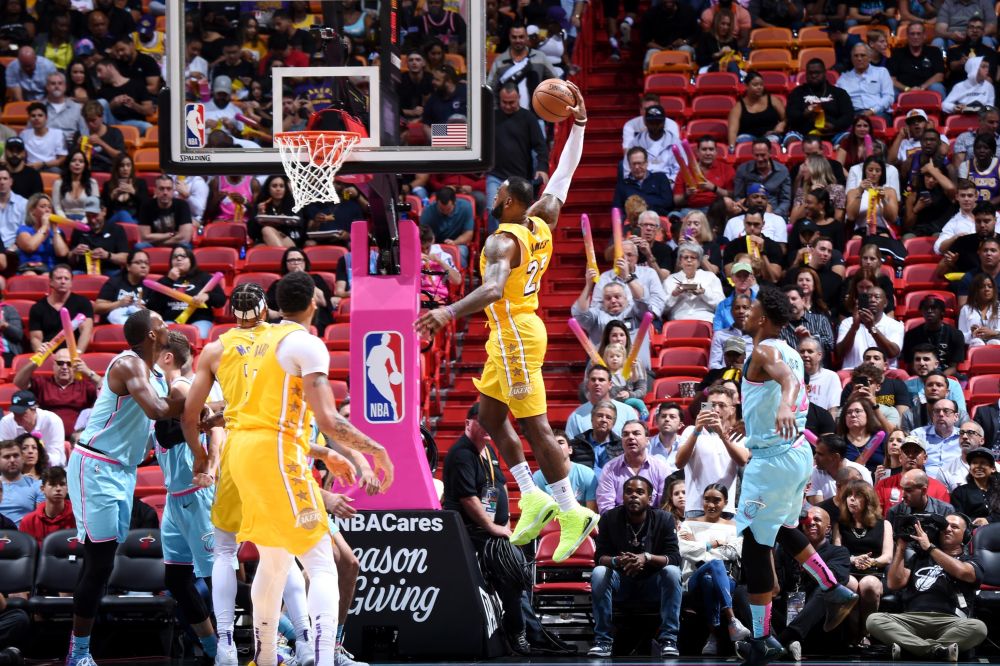 Unlucky for some, Friday the 13th seemed to be a lady for the Lakers today in a scorching heated matchup between Los Angeles, California and Miami, Florida. As the purple and gold took home their 13th straight win on the road with an 113-110 win by the beach.

Foreman-Ali, Tyson-Holyfield. That’s how LeBron described this heavyweight bout between his old and new team that had a playoff atmosphere and was Anthony Davis concurred “fun”. But it really was a boxing match slugfest for the belt as at first it looked like The King hadn’t taken all his talents back to South Beach. Until former N.O. dynamic duo Davis and DeMarcus Cousins twin towered him. Grading him at an A- and telling him to get back to taking everyone to school.

And oh how did he.

In this ring Jimmy Butler’s 23 was serving right hooks all night and fans on Twitter low blows, below the belt (can the guy not have one bad day (or just half in all actuality) at the office without you showing him the cardboard box like ‘Jerry Maguire’? Have you not seen what he’s done in year 17?! YEAR 17 PEOPLE! Father what?). Down went The King. Down went The King. But like falling down seven times. He got up again like the 8th wonder (word to one more in number 24 as I sit typing this in Kobe, Japan wearing a number 23 Lakers jersey…because I’m just that type of guy). And he got up swinging. All the way to a T.K.O. in the American Airlines Arena he formed Voltron with the big three of the ready for the rafters, one last jersey of Dwyane Wade and Chris Bosh, who he hugged pregame with so much love. “You good? You good?” He asked. Concerned about his friend and court legends health like we all are. Great to see you looking so well CB4.

The Heat’s undefeated homestand came to an end on this court canvas, as city for city these two teams of sunshine states styled out, live and in living colour. Miami in those Crocket and Tubbs turquoise Vice Editions that have you rolling up your sleeves and L.A. in those M.D.E. Shaq sized affairs against the team the Diesel refuelled was traded to, that are real gold in California like his slamming STAPLES statue.

But as the King went from the gallows of seven first half turnovers to a final coronation of 28 points, 12 assists (you see that tap pass that was vintage Magic from the Point King?) we all know who the real Laker and Heat legend was this night.

No decision about it.

From washed King to those spin cycle moves that rinse you. Washing his hands with all those refreshed timelines.

But how about all the slamming like Shaquille and stuff from A.D. too? As long range as LeBron from the beach let alone downtown too. And that goaltend from the D.P.O.Y. too though. Those type of plays count in different ways. And Davis’ line of a Kareem 33 points for a double, double with 10 rebounds was as sure thing automatic and reliable as the white tee under his jersey (I’ve just ordered mine in the Black Friday sale. It may aswell come with a lack of white tees because of A.D. and well I’m white and thinner than the hair that used to be uptop my crown).

Big man X-factor JaVale McGee also showed up sky-hook, lay-up line and alley-oop and one sinker finisher with that muscle flexing, screaming passion. Oh and 9 points, 10 rebounds and “hand me the Defensive Player Of The Year award” 5 blocks.

In the end it was just too much dynamic duo. Too much Bradley back to give the already deep Lakers more water (again just wait until Cousin relates even more than his advice at the half) and too much Alex Carushow, looking literally like an NBA Jam character pregame. Check the Lakers Twitter timeline. “He’s on fire”! Must be how he got that cut.

The Lakers are playing beautiful basketball right now. This is history. Like Shaq and Kobe, Magic and Kareem, Wilt and West, Mikan and those specs. Savour it.

As James Worthy clapping and lighting the cigar for this big game tweeted, “putting up 113 on Friday the 13th equals 13th straight Lake Show win”.

It’s all about the numbers 42.