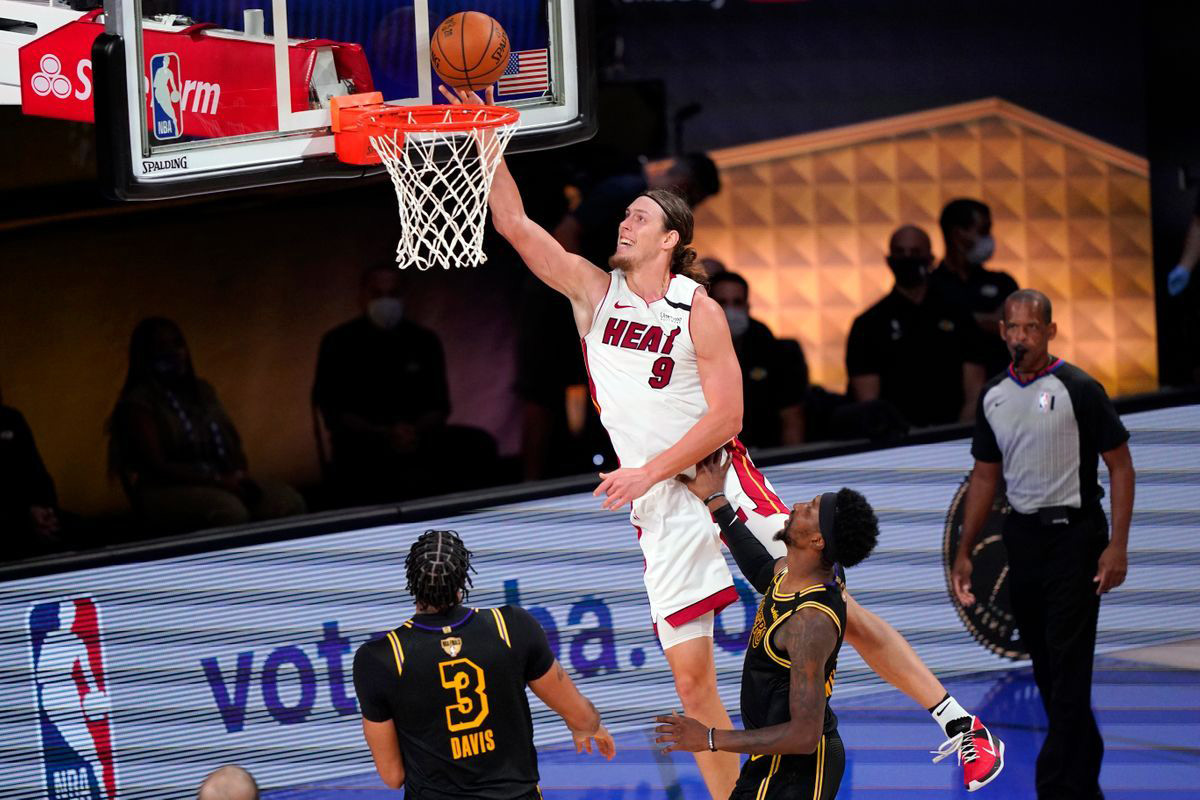 Kelly Olynyk 24 points against the Los Angeles Lakers is the most points scored by canadian basketball player in NBA Finals. Photo: NBA/Miami Heat

Kelly Olynyk has had some pretty big games during his tenured five-year NBA career.

The Scarborough-born, Kamloops, B.C resident has proven to be a reliable player during his time with the Boston Celtics and now with the 2020 Eastern conference champions Miami Heat.

Banged-up and without the services of all-star forward Bam Adebayo and all-heat-check team point-guard Goran Dragic — Miami was forced to dig deeper into their bench as they looked to avoid 0-2 NBA Finals series hole against LeBron James and the Los Angeles Lakers.

Bubbled-up in the Disney Kingdom for nearly three-months — the Canadian forward took full advantage of his extended playing time, scoring a team-high 24 points and 9 rebounds in the hard-fought 124-114 game-two loss to the Lakers.

Part of only ten Canadian basketball players to log official NBA finals minutes and only seven to win a NBA championship — Olynyk’s memorable game-two performance is the most points scored by a Canadian in a NBA Finals game.

The previous all-time high mark of 19 points was shared by Cleveland Cavaliers’ center Tristan Thompson (2015) and former Los Angeles Lakers’ guard Rick Fox (2001). Montreal’s Ernie Vandeweghe, the first Canadian to play in a Finals game in 1951 set the mark with 18 points and 8 rebounds to lead the New York Knicks to a Game five win over the Rochester Royals.

Vancouver’s Bob Houbregs, the second Canadian to play in a Finals game in 1955, came close to equaling Vandeweghe’s feat by scoring 17 points and grabbing 10 rebounds in the opening game of the 1956 NBA Championship. Houbergs’ double-double wasn’t enough as the Fort Wayne Pistons dropped a close 98-94 game to the Philadelphia Warriors.

Must Read:  LeBron James Is The Troll King

Needing a spark offensively to keep pace with the hot three-point shooting Lakers, Olynyk came-out firing, putting-up a NBA Playoffs career-high 16 field-goals — converting nine into made baskets, including 3-of-7 three-pointers and 3-of-5 from the foul-line.

The veteran forward was active throughout his 37 minutes of action and kept the Heat within striking distance on several occasions.

“I think it was just a couple of plays, a couple missed shots, a couple of offensive rebounds we gave-up, we had it right there on the edge, but we just couldn’t push it over, but we’re going to build on that, come back game three ready to rock.” discussed Olynyk during post-game.

The nine rebounds also tied a playoff-high and came-up just short of the ninth double-double by a Canadian in the Finals. Tristan Thompson’s 16 rebounds in Game 6 of Cleveland’s improbable 2016, 3-1 series deficit championship run holds the mark for most rebounds in a game. Thompson also leads the pack with seven double-doubles.

With at least to two more NBA Final games guaranteed, Olynyk, will look to add to his growing NBA playoff resume that features 45 post-season games, including respectable 7.8 points, 3.4 rebounds, 1.7 assists per game averages and 48.1% shooting percent from the floor.