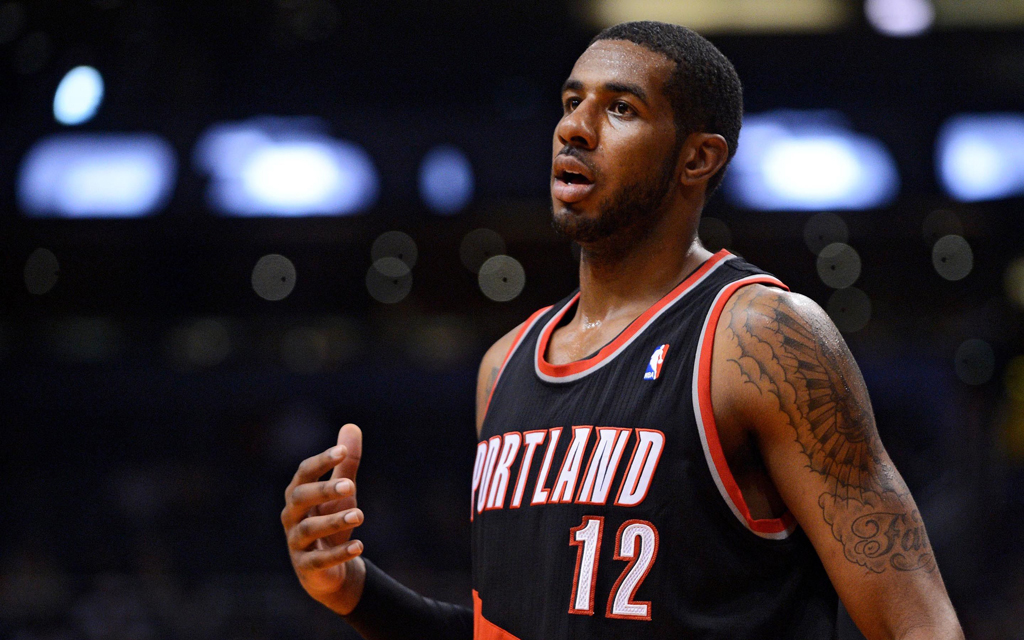 Roses are going to be sent from the city famous for them to every other town in the United States Of America that a professional NBA playoff team calls home! Why? Because LaMarcus Aldridge is making a killing. Just when the SLAM cover star Damian Lillard, fast-paced, hipster hot Portland team that where Blazing a trail looked to simmer and run out of steam, the greatest big-man in the league right now showed Tim Duncan and the rest of history that there might just be another big talent looking to scawel high enough to carve his own Mount Rushmore moment. Just when you thought the Miami Heat and the South Beach talented east dominated everything championship wise this side of the Thunder of Oklahoma City, you didn’t count on the blazing hot outstanding team in oregon that showed the state of hoops still belonged to the West best hot-bed that was more than Kevin Durant’s MVP and king throne stealing season, or the saged age and amazing defying strek of those old clicking spurs led by the robot Tim Duncan, the best Power Forward of all ti

me bar none. If Duncan’s the best, than his successor is about to match up with him as the robot will need more than a short circuit to beat the electro, super-charged android that is Aldridge. Fundamentally just like Duncan, but with a little more “fun”, LaMarcus is not only better than the scorching steal of Lillard, he may just be the best Blazer ever as USA Today report. Yeah there was the Glyde of Clyde Drexler and the brute force of the big, friendly giant Bill Walton, but Houston and Boston knew these legendds and laid claim to them respecitively too. If big L.A. stays put he’ll define Portland purist hoops like only Terry Porter, Cliff Robinson, Rasheed Wallace and Damon Stoudemire wished they could have.

It’s just that simple. He’s just that great and more than the dynamic duo and one of the L’s best he forms with his foundation with Damian he’s one of a kind. Forged from the rocks of a Tim Duncan prototype, but with that fire and flair of a LeBron the one that burns inside of Timmy, but tears down the rims in LaMarcus. These times in Portland are looking like the early new milleniuum when the Blazers where right there with Duncan’s San Antonio team and Shaq and Kobe’s Lakers. Now though with the Spurs still in it and OKC’s Kevin Durant reaching up and taking the baton off Kobe like Mike did Magic, this new Portand team have unchained themselves from those old ‘Jailblazer’ days and are as free as Django. No more guns or weed, just X’s and O’s from a team that takes over the slowing down pace of Indiana as the outside prediction from insiders to take it all from the core of Miami’s Heat heartbeat. As classic as their red, black and white jerseys and their pinwheel logo there’s more to this team than meets the critical eye. From Nicolas Bantum to Robin Lopez and Earl Watson to Mo Williams this team are stacked for the ‘chips and as quickly as Wesley Matthews, or the former Heat future Dorrell Wright will rise this team will. Still, through all the great players and performances it’s abll about their duo and the man who leads it much like Kevin Durant and Russell Westbrook out in Oklahoma. As Westbrook’s energy and enthusiasm complement Durant’s all scoring and killing game, Lillard does the same to Aldridge, fuelling his fire. Out of the two you’d probably take the Thunder and you probably wouldn’t be wrong, but in a league that’s donut starving for central players surely as the years go on you’d like to take it a little more inside with a man that’s revolutionizing the lost and dying art of paint performances, even going over Dwight Howard and the Houston Rockets in a serious series like the hate-filled Laker fans can only watch with wonder and wish.

Portland have had big, big players before. Technically with Rasheed Wallace and the heart and soul of Brian Grant…and who can forget the unfortunatly behind his time Arvydas Sabonis, who if in the NBA sooner would probably be the Blazer best and still regardless is one of the best big men in all of hoops all time. Still, that was the past and this is the future and it it comes round to the 20 and 10 potent, power threat that is L.A. ready to rule the rest like Kobe and his Lakers just a few years ago. Ravishing rebounds and duking it out with dunks this guy is a joy to watch, but behind the style is a stat-sheet substance that can post-up and back down anybody all the way to the pick and roll of easy but hard-worked basket after baskets that leave the defence with a hard case to solve. You just can’t stop this kid in the key. Give him anything more than 3 seconds and the whistle will be called for you to push it back down the floor. As of right now ‘Marcus rocked the Rockets on the road with a 46 point and 18 rebound effort in game 1 followed by a “lesser” (yeah right), 43 and 8 one in game two. In the payoff of the playoffs this guys not wilting, he’s making Chamberlain numbers. One day you may just call him a 40 and 10 threat as he raises the bar for the few forward thinking power post players that will come after him. He’s the first guy since the elite company of the king LeBron to have consecutive 40 point outtings. He’s the first guy with consecutive 43 plus point games in the playoffs since the great Tracy McGrady tried to escape the first round and is 89 point total in these two only pale in comparison to the multiple work of the clutch of Jerry West and the greatest of all-time in that guy called Mike. Even Jordan would have to shrug at the Blazers when it comes to this. Even the best doesn’t know how great this guy could be. Do we? Of course not…but we’re dying to find out right?

This L train won’t stop as it rises above the city. The Blazer best yet is the only Portland player in history to have two 40 point games. Even the great Jordan pretender Drexler had to give Houston his second 40 point playoff game and now against the Rockets who knows whats next because at press time the ball hasn’t even gone up for Game 3 yet. This guy could average or simply record 40 points over seven games in a series…but you know what? We don’t think it’ll get that for. Sorry Dwight but your Rocket is about to be grounded by the Trail of the Blazing Aldridge with a real problem for Houston that’s going to make James Harden wish the Thunder never let him slip down the sink like his stray beard hairs. I hope these guys like fishing, because as they prepare their bait and tackle the only thing Aldridge and Portland are going to catch is compliments, because they’re really coming on. At 28 years old, a three-time all star in his 6 foot 11, 240 pound for pound prime its easy to forget this guys been around for the best part of a decade, but still young and with a veteran saavy to go with that youthful exuberance you best believe the guy that was the true free agent to go after last year (not Howard…sorry, and I’m saying this as more than just a Laker fan) will be a Blazer lifer, Basketball God’s permiting. As these road warriors shake off those old troubled times they will begin to become one of the most recognisable and successful franchises that are the face of this new, next generation of new milleniuum storied teams that the likes of the San Antonio Spurs define, like the Sixers and Celtics of old testament time. Kobe can only hope there’s still room for his heel and the legendary Lakers. With purple bruised injury the gold is now in reach of Oregon.

Must Read:
Bulls 'Fear The Deer' As Milwaukee Bucks Chicago

A natural Power Forward that can swing to the dying need and breed of centre this guy couldn’t be more like Tim Duncan if he went out there and beat him man-to-man, one-on-one in a few weeks and brackets time. The Texan high schooler and college star may be a ways from the Texas triangle these days but he’s about to take out one of the corners in two games time. The Chicago Bulls wish they would have kept their silent second pick in the first round of the 2006 draft because with Rose wilting, the future of this league is getting bigger and better in Blazer town. The passion of Joakim Noah can’t match up with the arc of talent that is LaMarcus, the Bulls lost their horns the day they stampede shipped Aldridge’s draft night rights over. The guy could have been the central core of the New York Knicks too. Phil Jackson would have loved that especially alongside Carmelo Anthony, because right now even though he may have burned bright in his west domination as a Sun, The stat’s of Amar’e Stoudemire just don’t compare to this stud. Guys like Tyrus Thomas, Viktor Khryapa and Eddy Curry that where involved in the exchange for the great deal of LaMarcus Aldridge are basically Sam Bowie’s to these teams. I guess afte and things do work out for even the most unluckiest of teams after all with Portland’s time and tide right now. Now can we get another Jordan shrug? The former draft sleeper is waking everyone up…the ones he doesn’t put to sleep however. Those injured days alongside the great combo that could have been in the ill, injury-fated Brandon Roy now upgrades itself to the unique one-two punch of L.A. and D.L. that take the rest of the league inside and out. LaMarcus has got over his own potentially career ruining Wolff–Parkinson–White syndrome heart problems to show he is the soul of the Blazers and basketball with his surgical precise game that is cold and calculated for the divided and cut-open defences he faces. Oh and biy can this guy take it off you on the other side of the block too. One of the leagues most compleye players will be that word himself when he is matched up with another one beginning with ‘C’. Larry O’Brien knows it could happen. The trail of this Blazer and his beautiful buoquet of basketball brilliance will lead him and his to the superstar status that will come up smelling like roses. You get the flowers?