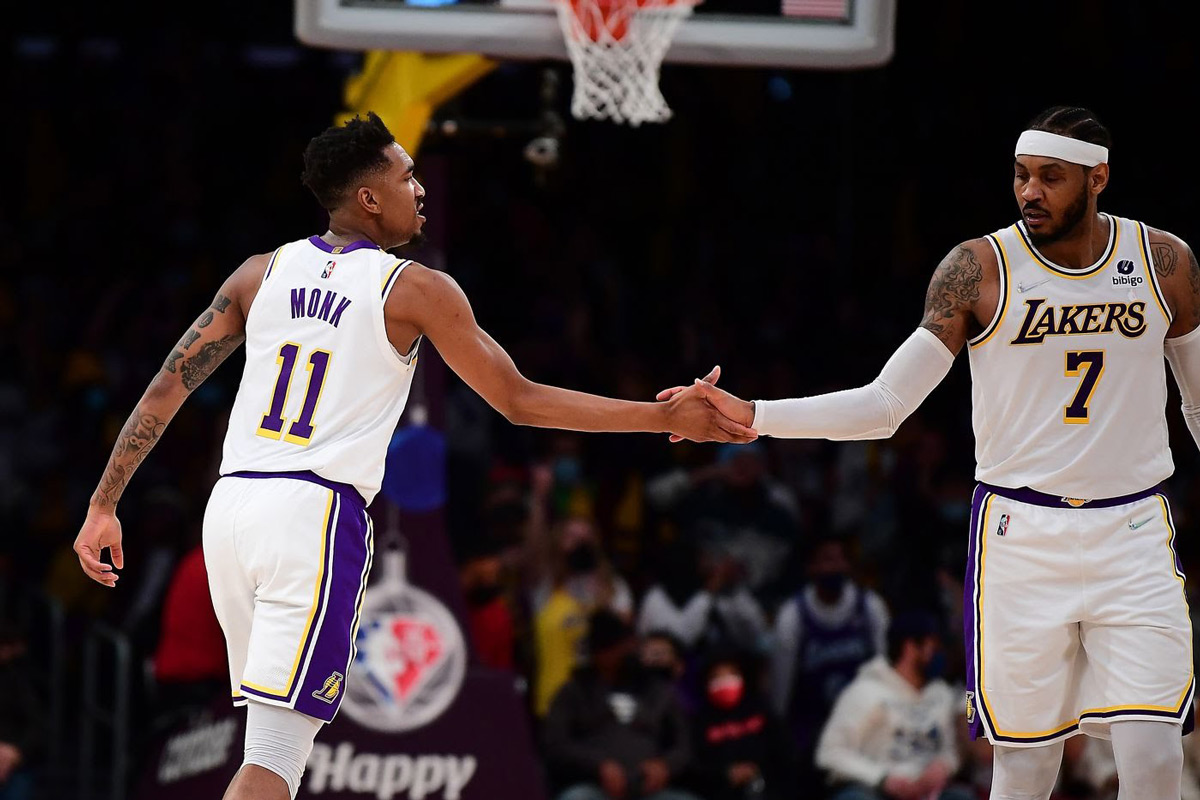 Pop star Halsey and her alternative Lakers burner Twitter (@HalseyandOne) just keeps giving us social media basketball gold. Providing the best timeline courtside commentary in Hollywood. Whether it be trolling fellow fans like she was Dionne Warwick, or even beefing with actual NBA players.

The ‘If I Can’t Have Love, I Want Power’ acclaimed album maker knows how to write a hit record or two. From breakup ballads to empowering anthems. And she even tweeted out the perfect lyric last night.

Triggering and as real as it gets.

If that goes on her next LP, I’ll give her the Grammy myself.

The Lakers had a five game winning streak going into last night against Memphis. But just when they were feeling themselves on Twitter, the high hops and blocks of Ja Morant and the Grizzlies mauled them 127-119 in their own house, on a Sunday too. God’s day.

How’s that for a service, Kanye?

But still, if you don’t share the losses, you can’t share the wins. The Lakers season has been topsy-turvy and that’s child’s play to say the least. We all know how COVID had ravaged every team, let alone the whole world. Meanwhile it appears that big man and their biggest chance of bubbling past the Disney-champs tag, Anthony Davis is a semi-permanent sick note.

Things got so rough the Lake Show even finally got Darren Collison and brought back Isaiah Thomas on week and a half contracts like they were J.R. Smith and Dion Waiters in Florida.

But hooray to the hustle of Stanley Johnson, whose heart has earnt him another one.

And did you see Red Hot Chili Pepper bassist Flea participate in the Lakers skill challenge at the half against the Grizz? Forget James joking with Metta Sandiford-Artest. Get this player a 10-day.

Lately, LeBron has been putting up prime numbers like 2, 3, 5, 7. Reigning against Ja’s rule, the King had 35 points, 9 rebounds and 7 assists. That’s kind of the size of it right now on ‘Bron’s latest MVP run. But even the King needs help in his castle.

He may get it soon. An x-factor in Kendrick Nunn looks set to finally make his debut like Lakers legend Trevor Ariza returning. Whilst the power of Pelinka is looking to rob Myles Turner or the nephew of former Lakers forward Horace, Harvey’s son Jerami Grant (which would be perfect for AD) before the trade deadline.

Must Read:
'They The North'-Drake And The Toronto Raptors Collaborate On A New Logo

They also have aid in the resurgence of the return of Superman Dwight Howard. Reunited Avery Bradley in a Bruce Bowen role, earning his full season guarantee. And new Caruso and Hillbilly Kobe, Austin Reaves doing the same. Shooting down Dallas in a Texan showdown.

Rock that baby for a man who has more turnovers than apples.

Add ‘The Duke’ shooting of Wayne Ellington, an underused Kent Bazemore (this years quintessential Quinn Cook team player who can still go at any given moment) chopping wood and carrying water with THT stepping it up after the critics went after him, and to give you the makings of a team here. One starting to gel like what the oldest team in the association rubs in those creaky knees. Let’s give it up for DeAndre Jordan, too, despite the fan hate mail online.

But there’s two more guys who really are being the difference makers this season.

Sure, in the last game along with Westbrook they combined for 20 points and 7-for-33 field goals as per Legion Hoops. But we don’t need to play this Stat Muse shaming game over the socials. Refusing to acknowledge that other teams and players do this too. Everyone has a bad game, and it was just one in the books.

By the time you read this, Carmelo Anthony and Malik Monk will probably be making their mark on another contest, which will have the Twitter trends changing like fair weather friends.

The game and their collective ones are bigger than all that. Especially as the Hall of Famer and a star in the making, have both tweened between starting gigs and potentially rivalling for the Sixth Man of the Year trophy.

Carmelo, who commonly uses expletives to confirm with teammates he’s corralling the rebound, even jokingly told Malik to “get your a## out” recently as he subbed in. Both guys have such a hot hand, Vogel doesn’t know where to go. Even LeBron has to give it up. Despite the fact that right now, it looks like even The King can’t miss.

‘Melo is a midrange master and Monk can even turn a sinner, holy with his dunks that could take off your head like the time Michael Jordan slapped him for the flagrant in Buzz City. But how about heading downtown with the free agent the Lakers finally got after all these years, and the one they got for cheap?

Anthony taps three-fingers to his dome so much you would think he was a meme telling you to act like you’ve got some sense. Malik on the other hand has his own palm gesture when he’s precise from the perimeter. Refusing to tattoo his shooting arm, because that’s “just for buckets” like the swag of former Laker super sub Nick Young’s advice.

Forget the 360 of the Anthony Davis, LeBron James and Russell Westbrook big-three, just call this downtown dynamic duo 7-11 for your convenience. There’s more in store from these microwave men.

So what if they both came up with air on two potential game-tying threes against Oklahoma last month? How about two months ago against Monk’s former Charlotte team?

‘Melo on one leg saved the ball from going out of bounds at half court by stinging it off a Hornets players calf. With time on the clock just fading to black the errant ball was gobbled up by ‘Lik who licked a shot from halfcourt that was all butter.

Showtime might not be so smooth this year, but these two still know how to put one on.