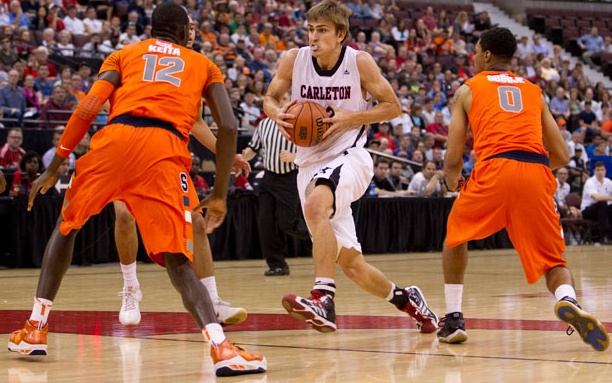 Ottawa, Ont. – (BasketballBuzz) – Taking the floor at the newly minted Canadian Tire Centre for the first time since winning a record ninth CIS Men’s Basketball National Championship, the Carleton Ravens came up just short against one of the giants of NCAA College Basketball.

Trailing for the entire game the Syracuse Orange (ACC) fought back from a 15-point second half deficit to tie the game, force overtime and eventually walk away with a 69-65 March Madness like, overtime victory over the Carleton Ravens.

Sophomore Jerami Grant (Hyattsville, Md). shook off a slow opening half to score six of the Orange’s 10 overtime points and finished with 18 points and nine rebounds. Canadian freshmen sensation Tyler Ennis (Brampton, Ont.) in only his third game in a Orange uniform put up 15 points, dished out four assists and added a game-high five steals.

Tyson Hinz found himself free in the middle of the paint and score six straights points for Carleton to restore a 10 point cushion and forced head coach Jim Boehiem to call a timeout to refocus his troops.

The Ravens assaulted the more athletic Syracuse team on the boards by holding 28-15 rebounding advantage at the break and moved the ball extremely well against the 2-3 zone, specially in the first 10 minutes to take a 32-22 half-time lead against last years NCAA finalists.

The Ravens came out of the locker room fired up to take 38-29 in the opening minutes of the second half and found themselves holding their largest lead (15) of the game at 44-29 when Thomas Scrubb (7 points, 9 rebounds, 6 turnovers) and Connor Wood connected on back-back three-pointers.

Syracuse responded with a game changing 14-0 by limiting the Ravens second chances forcing turnovers and rushed shots to pull within one point at 44-43. The Orange later tied the game at 54-54 and took their first lead with 3:54 left in the game.

“They are physical, tough defensive team, as tough as anybody, defensively and there ball movement is a as good against our defense is as good as anybody.” added Syracuse Orange Head Coach.

“When you are down 15 against a good team on their home court, I think at that point of the game you’re almost thinking are you going to get beat by 20? I though we really dug it down and did a great job defensively and pulled off a pretty good damn comeback.”

Carleton Ravens 6’7, 220 lbs, senior forward Tyson Hinz (Ottawa, Ont.) racked-up his third straight double-double against a NCAA team with 16 points and a game-high 13 rebounds, six of them on the offensive glass. Philip Scrubb coming off a career-night against the Wisconsin Badgers struggled from the outside, going 2-13 but hit some much needed shots late to keep Carleton in the game.

“He’s good, he’s always under control, he makes big shots, hes one of the best players on that team” said Ennis after the game.

Ennis is highly expected to join Canada’s Senior Men’s National Team next year and Scrubb should also be in the mix given he was the only Canadian University player invited to be training camp.

Syracuse will look to close its Canadian tour with a perfect 4-0 record when it meets the Ottawa Gee-Gees at Montpetit Hall. The Gee-Gees (1-1) are coming off a tough 101-92 lose to the Wisconsin Badgers.