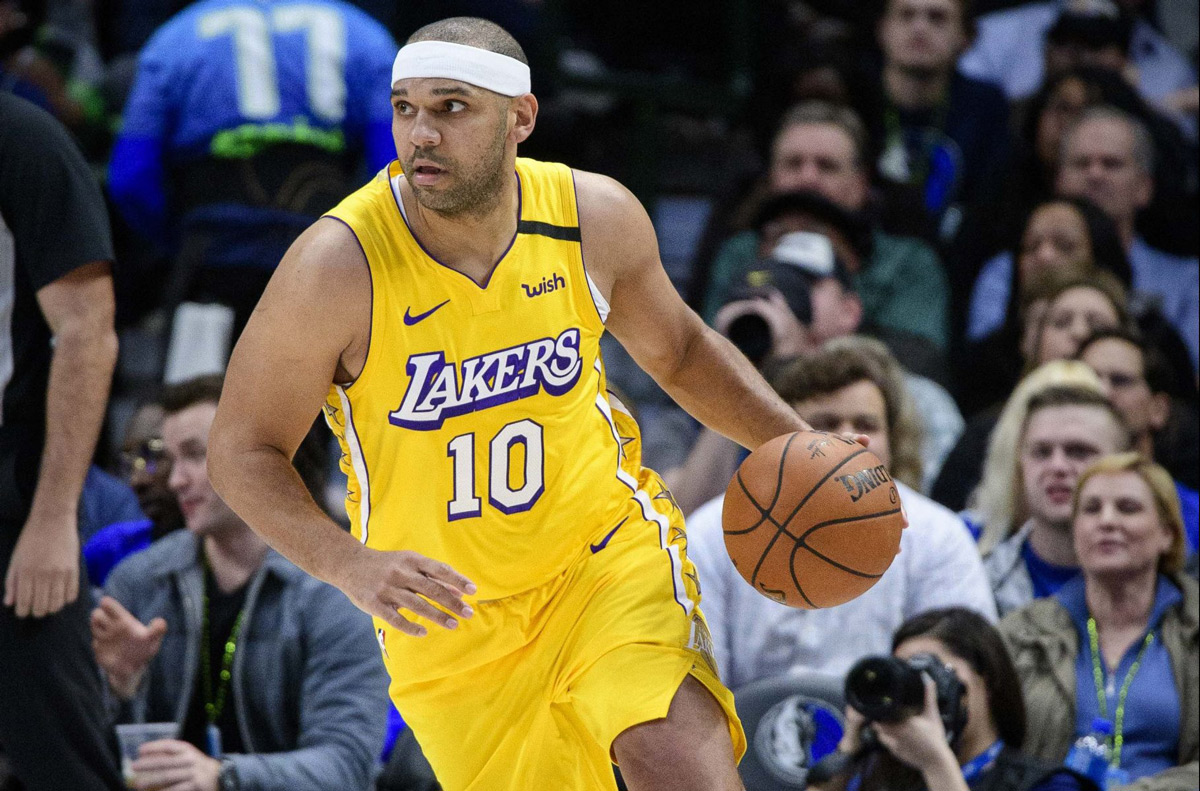 LeBron may be the Lakers unequivocal leader, but from the bench of the NBA champions, enforcer Jared Dudley has led the way.

That’s why he got signed in ’19 when most in Lakerland were hoping for Carmelo. The reason he got re-signed this Summer as one of the biggest Laker free agent acquisitions like AD (OK…maybe not that much). Also why the bald headband, Elmer Fudd ‘Space Jam’ memes have stopped, even though the King James starring sequel to the Michael Jordan classic is out this July on HBO Max.

Like a ‘Mad Dog’ Mark Madsen Dad dancing at victory parade (remember those? It’s coming back when everyone can enjoy) of the first championship of the Shaq and Kobe dynasty when he was just a rookie. Or the presence of Frenchmen Ronny Turiaf at the end of the wood, whose passion needed no translation.

The Lakers have always needed a vocal and inspirational leader to influence everyone from the franchise face to the DNP-CD, just like they’ve always needed an above the rim, dunking spark off the bench in the one-handed mould of a Shannon Brown or Larry Nance Jr.

With Jared, they have exactly that. And like the hustle of Madsen or the heart of Turiaf, Dudley can play too. Bank on that as he kisses another three off the glass from downtown and reaches for the floor like he was picking up spare change for his garbage time in signature celebration. It may not be two fingers to ‘Melo’s dome, but it still hits the bucket the same.

The death of Kobe and GiGi. Coronavirus and the leagues shut down after the Utah Jazz’s Rudy Gobert and Donovan Mitchell tested positive (how great is it now everything is good again in Salt Lake City?). The restart in Florida’s Disney World. The police brutality and the Black Lives Matter protests. 2020 was the worst. The hardest year on record. We felt it everywhere. From our own homes, all the way to Hollywood.

In Jared Dudley’s new short autobiography for Amazon Original Stories he takes us ‘Inside The NBA Bubble’ like a diary entry. Showing just how insightful and influential he really is. Not just to his teammates, but his former team and the NBA as a whole…especially inside the Sunshine State’s quarantined world as closed off and impenetrable as the one on Marvel’s ‘WandaVision’.

Cowritten by Carvell Wallace who backed up Andre Iguodala’s ‘The Sixth Man’ this is worthy of being taken off your bookshelf and placed on the coffee table whilst you are at a social distance. Get your Kindle’s ready, because staying at home it’s time to hit the books. Or even listen out for an audible audiobook read by the man in the middle of this all himself.

Before the Kobe and GiGi tragedy, back when we didn’t even know what COVID-19 was in 2019, LeBron and the Lakers still had problems in a hot Summer coming off playoff droughts for the Lake Show and new postseason failings for the King.

Hong Kong. Protests against China for human rights were at full force a whole calendar before the United States saw something similar. The Lakers were in Shenzhen about to play the Brooklyn Nets but NBA billboards came down like “Witness” ones in Cleveland after number 23 took his talents to South Beach. Houston GM Daryl Morey tweets supporting sentiments that the Chinese government see as an attack. James Harden-also in Asia, but in Tokyo, Japan for an exhibition with his then Rockets-backs him up like only you would.

But what did the King say amongst all this? All these endorsement deals gone south and pro-government death threats. What does the man who has always led the league in social justice and even built a school in his hometown for underprivileged kids say?

He says the tweet could have “waited a week”.

But now after all this time I see it differently thanks to Jared Dudley who always keeps a mind as open as how you shouldn’t leave him on the perimeter.

“What (LeBron’s) really saying is: You tweet something like that from the comfort of your own home, while actual players in your league are stranded in China, that’s not cool. You need to think for a minute about what the impact of that is on other people.”

Now I get it. Apologies to the King.

Dudley called the situation in China, “the prologue for a dark, challenging year.” One that he begins in this book from a sleepy team flight out of Philadelphia of all-places following James passing Bryant in all-time points and receiving tweeted congratulations from the Black Mamba himself. Only to learn by the time they passed this “black lake at midnight” that Kobe and his daughter Gianna were gone.

Former Laker defensive specialist Avery Bradley woke Dudley up from his dreamy reverie to a raw nightmare and “that’s how 2020 started.”

Then number 23 vowing not to play without fans turned into Jared learning, “that Tom Hanks tested positive for COVID. Which is weird.” Then everything on the planet came to a halt as the world stopped spinning like the Spalding.

When it all started slowly to get back together again the Lakers regrouped and doubled down on their mission to win…and to win for forever 24 in their snakeskin Mamba jerseys. They missed doing so in Game 5 against Miami, their home state advantage in the Bubble and the Butler’s serving following a Green missed three.

Dudley said it wasn’t on Danny, but all of them like the true teammate that he is. The next game the Lakers took it up a notch and engraved themselves on the hardware as they took it to Hollywood after LeBron took it out on the basket like “the rim killed his dog.” Trust Dudz to have the best line from the best courtside view of the hardwood from the pine.

Before all that, however, Jared details the journey that got the Lakers to this definitive Celtic tying destination in their storied NBA legacy. Nights of wine, ‘Call Of Duty’, ‘Madden’ and watching ‘Versuz’ battles between hip-hop legends Snoop Dogg and DMX with Bubble pick-up Dion Waiters dancing away.

Dudley already knowing how good THT was going to be. LeBron eating peanut butter and jelly sandwiches for the first time because you saw how bad the Disney food was and showing just the type of teammate and person he is by refusing to let Dudley spend his birthday alone.

Must Read:
Will Wade's World Land In Lakerland?

“He’s a very private person in general. Not with his teammates, where he’s open, gregarious, kind, generous. He’s always doing things like he did with the birthday thing for me. He’s always taking us out, making sure we’re about to get dinner, making everyone feel included.”

As a matter of fact if you doubt LBJ now. Take it back to that photo at the Lakers first game back after Bean passed. Look at his face watching the jumbo-tron. Look at his arm around a devastated Quinn Cook-who changed his number 2 to 28 in honour-face in his hands distraught. A picture says a thousand words and the love and loyalty is cemented in this bond. A hurt teammate helping another one in the same situation. Picking others up before himself. Brothers with each others backs. As it should be. Family first.

Just like the NBA one, who this basketball bench player Dudley went to bat for when it came to bubbling, or not playing. Especially, after the players only meeting following the Milwaukee Buck’s boycott after the Jacob Blake shooting in their state. Talking to everyone from his leader to his former teammates to let it be known to them, it’s more than just the physical money, but making a stand and also a path for the future of this game. Which an impending lockout would have closed off.

Without guys like Dudz, this could have all been a dud.

Remember, this game stretches longer than the hardwood and teams stretch longer than their bench. James may sell the most jerseys, but when we’re talking about Dudley, here’s a guy who gives away his number 10 to fans like he used to complimentary tickets to games when we used to be able to do that sort of thing.

When it all opens up again expect Jared to have a fistful of tickets for everyone for a Lakers team who have done more overtime recently than coffees shop jobs. Not just because he’s man of the people, but he lives for this game. As he closes this book and many chapters named after hip-hop hits like ‘Gin N Juice or Tupac’s ‘2 Of Amerikaz Most Wanted’ with the Doggfather he has a hard time accepting Disney World and the Lakers time on the throne is already over like families leaving the theme park castle.

“You’re trying to get back to reality. Whatever that is. But the thing is…you don’t want to. You’ve been in the Bubble. There’s a part of you that now realizes that you could have stayed there forever”.

Serving as a time capsule to the social justice stand and new ground broke on the hallowed hardwood of the NBA Bubble. This 40 something paged book from the thirty-something may be briefer than his time on court, but ‘Inside The NBA Bubble: A Championship Season Under Quarantine’ goes deeper inside the NBA than Ahmad Rashad. Time to burst this bubble open. 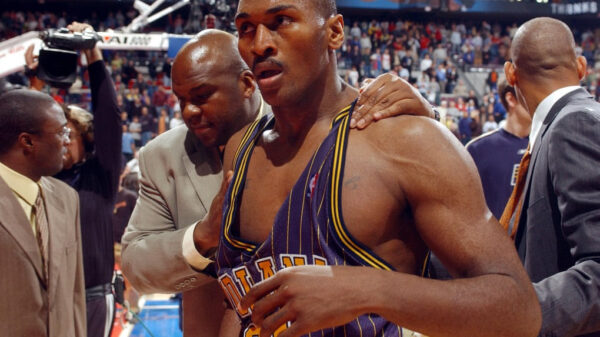 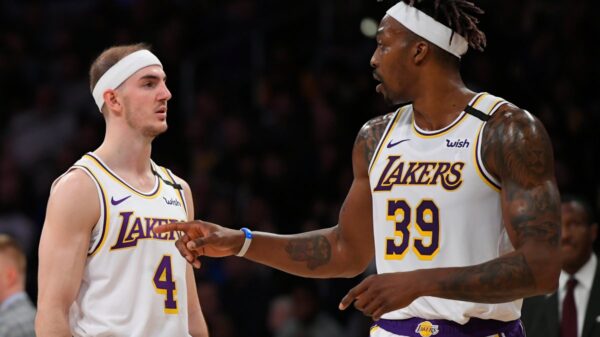