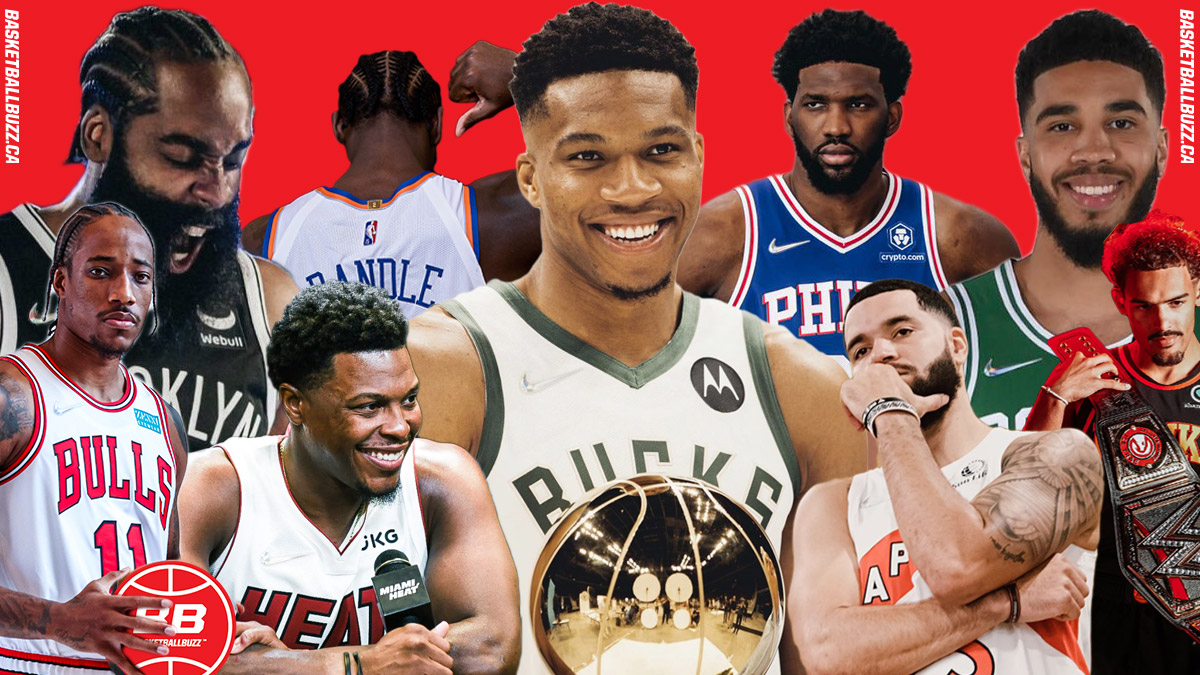 Do you think the most storied team in league history are just going to let their biggest, bitter rival, the Lakers roll over them in the history books? Tied at 17 championships you may count the Celtics out after losing Kemba Walker, but believe in Boston.

Because the fact is that for all the wheeling and dealings in this league, Jayson Tatum and Jaylen Brown are still the best youngest dynamic duo like a young Paul Pierce and Antoine Walker back in the day…with more upside. Oh, and they got Dennis Schröder off their foes too…for cheap.

Regardless of Kyrie Irving’s vaccination status, which he still requests privacy for, a healthy and safe Brooklyn Nets squad are still the team to beat. Kyrie, Kevin and James Harden. The biggest names in the business. So much so we don’t even have to say Durant’s full-name like Late Night legend David Letterman crashing the media day press conference and hilariously asking KD what his initials stand for.

The B.K. are straight savage and they’ve even added Patty Mills and Paul Millsap to their growing list of big names that welcomes back LaMarcus Aldridge after his career threatening departure last year. The sweetest of all stories.

Julius Randle showed the Lakers, the Maple Mamba, RJ Barrett showed Canada and the New York Knicks showed everyone else they belonged in not only their most famous arena in the world’s most celebrated city, but the NBA Playoffs too.

Now Kemba Walker has come home expect the Garden of Eden to have even more Mecca moments. Oh, and they added Tokyo Olympic standout Evan Fournier and got Derrick Rose back too. The concrete jungle where dreams are made.

The Sixers are in the process of losing defensive maestro Ben Simmons…no need to reinforce those rims now. They still have the man that coined the process phrase though in Joel Embiid who can still ring that bell. Adding his rival Andre Drummond to his frontcourt is a curious move that might bring more drama to a team that wants none like Mary J. Blige.

Losing Dwight Howard to the Lakers for a man who struggled in Hollywood may not give them the happy ending they want, but they still stuck to the script and got Danny Green back. And he can still shoot like Seth Curry. But this brotherly city needs love like LL Cool J.

No longer the Tampa Bay Raptors, our Toronto team is coming back home to The 6. These certified lover boys still miss Kawhi and now Kyle Lowry too, taking his talents to South Beach. No matter, they’ve bounced back from losing greats in the past (DeMar DeRozan). The future of the T-Dot is spicy, Pascal Siakam, OG Anunoby, Fred VanVleet and Gary Trent Jr.

Now they get to add fourth pick Scottie Barnes and free agent Goran Dragic too and don’t sleep on Japan’s own Yuta Watanabe, making his home here after the two-way. A season and a Bubble removed from their own championship this different team aren’t surprising anyone. But they will exceed expectation.

Speaking of DeRozan he joins a Bulls team that is ready to stampede towards being the most improved squad of the 2021/2022 season. Zach LaVine is an All-Star now and from next season he will have a pure point setting his alley-oop table up in the form of Lonzo Ball.

They’ve added another former Laker in GOAT Alex Caruso, who finally gets to play for the team that had the real greatest of all-time. This fantastic four may not be a big one, but the Bullpen’s last dance won’t come until at least early summer next season.

Everything is up in the air with Kevin Love. Hometown hero Larry Nance Jr. took off out of the town his father built above the rim. And we still are waiting to see how good certain players like Collin Sexton will be after taking on Brooklyn’s big-three on his own last year.

Must Read:
LeBron James Took Everyone To School This Year

Now with the third pick in the 2021 Draft, the Cleveland Cavaliers selected their future in Evan Mobley. Add Lauri Markkanen from a haul from the Bulls (don’t sleep on Denzel Valentine), Ricky Rubio and big Tacko Fall and the C’s ceiling is higher than Nance’s junior hops.

Motor City is in need of a fuel injection. So they’ve just got one, pimping their ride with the top pick in the draft. Cade Cunnigham could be the future of the game going H.A.M like Milwaukee Bucks assistant coach Darvin used to above the rim. Jerami Grant, Saadiq Bey, Hamidou Diallo and more are all simmering for a squad that’s bubbling like Florida during corona.

Let’s bring it all to boil and turn up the nitrous for the D. The roster has been rebuilding and rebuilding with more sequels to that idea than the ‘Fast and Furious’ series, but this franchise can still cross the line to the playoffs. Even if it is by inches and not miles.

No matter how many times they run Hickory picket fence like Hoosiers, the Indiana Pacers still feel like a overlooked team like their icon Reggie Miller is a forgotten legend. You only a have to watch the ‘Untold’ Netflix ‘Malice At The Palace’ documentary to see that. But Indy have just drafted Chris Duarte with the 13th pick to go along with another underrated superstar in Domantas Sabonis and a squad looked over the same.

Your NBA champion, the Milwaukee Bucks are no one and done. They have a legendary legacy from the 70’s of Kareem Abdul-Jabbar and Oscar Robertson, to now with Giannis Antetokounmpo and Khris (“we (expletive) did it man”) Middleton. Don’t sleep on the Greek, who freaked everyone who said he had no jumper and gave him no charity for his time on the line. Dominating inside like no one since Shaq…and you know what that did to the league.

Giannis is a God. All-star Middleton is a former MIP and more than a sidekick like Scottie for your MVP too. Finally Jrue Holiday, Pat Connaughton, George Hill, Rodney Hood, big Brook Lopez and hero Bobby Portis round out the rest of the team that want to keep it dynasty same like San Antonio back when Shaq was dueling with The Admiral, David Robinson down low. If you’ve just won a chip, why fix? Bucks in six.

All Hawk eyes are on Trae Young who is going to own Christmas with his bow like he did bowing to New York. Once the season opens it’s going to get real cold this coming winter with Ice Trae in your veins like D’Angelo Russell. You know how far this team can fly with him and the new Bonner like red-bomber in Kevin Huerter bringing the hurt.

Big Clint Capela, Bogdan Bogdanovic, John Collins, Danilo Gallinari, Solomon Hill, De’Andre Hunter, Cam Reddish. The ATL is more than Young and deeper than you think. Now what does 6 God Lou Will and the redemptive arc of Jahlil Okafor have in store? The A has more options than the alphabet.

Jordan’s ‘cats are so Jumpman, Jumpman, Jumpman good, the greatest of all-time doesn’t even have to consider coming out of retirement for the team he owns like the Washington Wizards…even if he does have that itch. LaMelo Ball has the Spaldi…sorry the Wilson now. Even besting his brother. His pitch perfect passes are a thing of basketball beauty and purity. Just like seeing the return of Gordon Hayward to form.

Losing Malik Monk to the Hollywood cast Lakers stings the Hornets. But Miles Bridges, Terry Rozier and new warrior Kelly Oubre Jr. fills that gap and the culture of this ball club. This hive of basketball is buzzing like us.

South Beach is back bringing the Heat and Butler and Co. are ready to serve those who say they are just “Eastern Bubble Champs” with a notice like Jimmy did coffee in Disney World. Pay attention like they did his 20 bucks cost per cup. The beasts of the East may be the Bucks, but the talents of LeBron’s former getaway destination land is loaded like ‘Bad Boys’ for life. BAM, BAM, Bam Adebayo will always hit you down low and their other creator, Tyler Herro is playing hero ball. All whilst Duncan Robinson shoots your lights out, while sounding like a San Antonio Spur legend hybrid.

Let’s not forget that the Heat are Victor Oladipo deep have also added Raptor hero Kyle Lowry and Buck and sneaker champ PJ Tucker with the bag. Not to mention former Finals rival Markieff Morris for the battle tested, war ready like Rick Ross experience in the Port of Miami. Now if that wasn’t enough, even Udonis Haslem is back for yet another dance. One last time. Don’t burst this teams Bubble.

On the other side of Florida, pulling two top ten picks out of the draft might just be the rabbits foot the Orlando Magic need for their luck. The Magic been down on theirs since the days of losing Penny to injury or Shaq and another Superman, Dwight Howard to the Lakers too. Jalen Suggs (fifth pick) and Franz Wagner (Moe’s brother, who’s now here too) at 8 are a wonder and the future. So much so they can afford to have Air Gordon leave the building even though his career was ceiling heading for their rafters.

Cole Anthony, Mo Bamba and Markelle Fultz showing in full he is no bust help this team have a decent hand. But they can’t wave their wand at much more than that. The rest of the roster sort of represents their veteran Michael Carter-Williams with all due respect to the talent. They have a lot of potential with the tricks of their trade, but in the end like many stars in the Magic Kingdom, it could be all an illusion.

Following last offseason’s trade for long tenured Wizard John Wall, Washington have just given up Russell Westbrook to the Lakers. But when you get a Pelican like mini-haul in return, why not? Zero for zero, Kyle Kuzma still has star potential. Montrezl Harrell has hustle and heart like he has braids for days. And Kentavious Caldwell-Pope is the X-factor. Besides they still have all superstar Bradley Beal who had himself a season in the last 82. And Rui Hachimura after a sweet sophomore year is becoming big in more than just his native Japan.

Especially after he carried the flag for his country with the whole world watching. Representing, as Tokyo finally held the 2020 Olympics this summer. That’s not much rest for Rui or Bradley, but best believe they’re both ready with new pick-up Spencer Dinwiddie getting his bag. Just like some former Lakers and the last of the young core in Kuz control ready to prove Rob Pelinka wrong. The jobs not done. 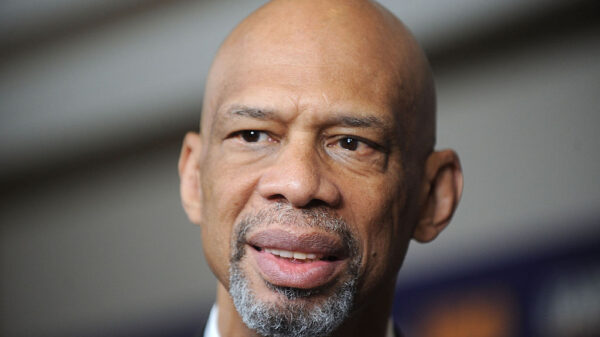