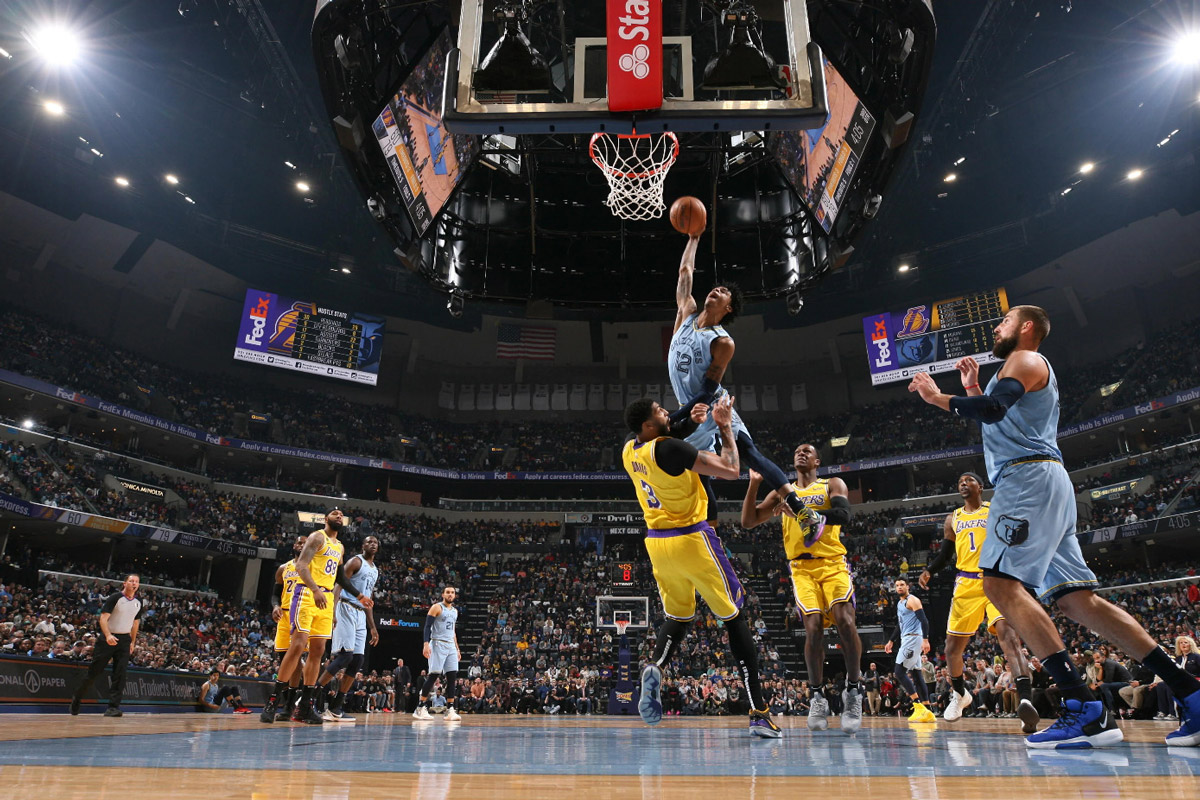 You Kevin Love to see it.

Memphis Grizzlies for sure Rookie of the Year (no doubt) Ja Morant unleashed a dunk attempt on Defensive Player Of The Year for sure Anthony Davis (no doubt), that LeBron nuts to former teammate Josh Hart’s high-five chin, resulting in missed time for a groin injury (talk about load management) was exactly like the special one Ja served K like breakfast with a spoon. And even if it missed being dunked through the bowl like trying to find the cereal box toy it still made for an iconic, identical image, word to Getty.

As the King returned in a Jackie Robinson Dodger 42 to Volunteer Tennessee, looking to make history after all his men won without him the last game out. Strong arm bullying the lane and flexing at the Grizz bench like he was on top, before he saw who really flew above the rim like 2Pac.

Slam Dunk Contest next year for the rook?

When he finally starts putting down this signature slam right through the hoop, the boy in baby blue you mistake for playing for Denver with the altitude of all his aerial assaults will win the dunk contest every night of the 82.

Even Dwyane Wade will have to give him a 50 piece then.

But even if Morant has more bunnies than bugs, he is still more than the high flying and trolling timelines of a fan who said he lacked the killer instinct on Twitter. But how about the Grizzlies Sesame Street word of the day L for the Lakers for post-game trolling? Well tonight in a Hitchcock moment Ja Morant dedicated his teams big win over the best in the West Lake Show to said fan, as he made everyone scream the way he went all Michael Myers on Hollywood (“Groovy Baby”…no not that one).

Morant’s decadent double/double trouble of 27 points and 14 assists was all downtown and dimes with the binoculars that found teammates running away down court like a bullet, before he shot the King’s throne down. Even if in downtown Memphis there were more home-stand fans wearing purple and gold than blue suede shoes.

Thank you very much.

The Grizz showed that former franchise grit and grind like Mike Conley with his name is Jonas Valanciunas (22) playing Marc Gasol, as they blew out the Lakers 105-88 like Gerald Green that birthday cake. They snapped a five game L streak like candy crushing a party piñata and held on to the last spot in the West’s playoff picture like two hands for sure on a dunk.

Must Read:  Tyler Ennis picked No. 18 overall by Phoenix Suns

Could this be a Dikembe holding the ball above his head like Simba, Nuggets over Sonics playoff upset preview for all the King’s men?

Not likely, but the Memphis Grizzlies have remained one of the best and most underrated in the West like L.A. did the Gasol brothers for the consistent, best part of a decade now. So all credit where its due even if the new Showtime played like the Lackluster Lakers. Inserting the headband fresh Alex Caruso into the starting line-up for the first time (you’ve come a long way from the G League cult hero) alongside fellow big three members LeBron James (his own double of 19 points and 10 rebounds) and Anthony Davis (almost with 15 and 9).

Losing for only the second time this month as Ja turned it into a leap year, the Lakers always have tomorrow (even if it is against a Pelicans team of former Lakers that have their own revenge season over A.D.) but they need to get out of this complacent mindset for the pre-playoff madness of March after Morant made them walk.

The Lakers were held to a season low 88 points even if that double Kobe jersey new signing of twin Markieff Morris hustled for buckets between mid-range and the perimeter fence. Now it seems like the Lakers will close in on the buyout services of Waiters or Harkless as they look to stay fresh for the postseason and not fall into streaks like not cleaning the glass properly.

As for the Grizzlies however a fresh polish to this Grit N Grind looks to clean up new eras like one of those Vancouver, Canada caps. With Morant making downtown highs like skyscrapers and Valanciunas gobbling up a second straight 20 boards like Pac Man, this team is looking to ride this seasons surf until they are up top with the high score in this video game arcade age.

And with Ja ruling like 3:36 in this 2K time, between me and you he’s going to take home more than a R.O.Y. for his mantle-piece trophy trouble.

How does a berth sound?