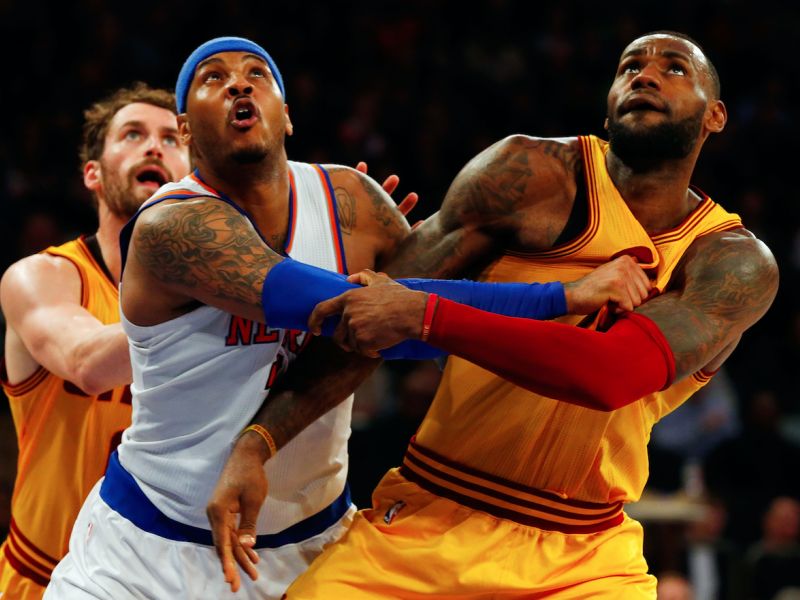 And we thought the King would love this.

Recently, even after netting three-point specialist Kyle Korver-who flew in from the Atlanta Hawks last week-LeBron James has been complaining with profanity that his defending champion Cleveland Cavaliers team aren’t as good as last year and are in desperate need of a playmaker like a dry erase with no marker. Even if they arguably have the best big three (aside from the Golden State dubbed Fantastic Four) in the league with underrated big man, Kevin Love, even more underrated and one of the leagues best Point Guards, Kyrie Irving and of course the undisputed best player in the league that needs no introduction himself, the King LeBron James.

But still aside from this and some young and veteran depth that stretches from Canadian and new Kardashian, Tristan Thompson to the old guy that still has hops like former Net rocking teammate Vince Carter, Richard Jefferson, the King wants more men to win the battle for NBA supremacy with the Warriors that looks to have a trilogy conclusion this postseason years end.

With that in mind the New York Knicks that have a Madison Square Garden mecca big-three of their own-in hometown hero Carmelo Anthony, sophomore sensation Kristaps Porzingis and big free agent signing Derrick Rose-saw an oppurtunity to end their problems at the root of their rotting core. Despite sticking through with them through thick and M.S.G. nosebleed fans thin, after having talks with the N.Y.K. brass about waiving his contracts non trade clause (and many a passive/aggressive conversation with owner Phil Jackson through the media), Carmelo Anthony has been dangled the Cavs way. With the Knicks thinking they could unload their unhappy franchise player and build a team round the future potential of the power of Porzingis and still maintain a big-three with Love and Rose. Sounds like a matrimony made in hoops heaven.

Must Read:
Canada at the 1952 Olympic Games

Only to be loved more by courting purists with the potential of LeBron James and Carmelo Anthony teaming up. These superfriends who came into the league together as eagerly anticipated and league passed rookies have had many classic duels over the years but have also hinted at forming superteams with the likes of Chris Paul and Dwyane Wade. But just like Flash running from the chance to align with the King this offseason (but watch this space rumor has it that Wade will be one and done this season with his hometown Chicago Bulls), this Carmelo trade hype has mellowed with the Cavaliers showing no love for trade talking about Kevin.

Although the anticipation of seeing a LeBron/Carmelo tandem (that L.B.J could still have the pull to push for) is terrifyingly good, epecially in relation to a Cavs/Warriors III with Curry and Durant (and lets not forget Kyrie and Klay), it’s best the Cavs and Knicks keep their alphas for better. LeBron doesn’t want to play “fantasy” basketball. New York still has a big man in Kristaps but the Cavs would lose one and create a huge hole in the middle without Kevin. The Land wouldn’t like that. And now there will be no hate from Love as Cleveland refuse to table a discussion involving his movement, therefore removing the former disgruntled player from being the latest Pau Gasol Lakers situ. It’s a bold move of loyalty…even if one hasn’t been made.

But in life there’s always the temptation and thought of what could have been and now the Knicks have shown their hand too all we have left is no change and still two unhappy superstars.

Must Read:
When StubHub Sponsors An Actual NBA Team You Know The Game Is Rigged

When you don’t gamble you fold.

So when it comes to the Knicks and Cavs and their two leaders, where do they all go from here?