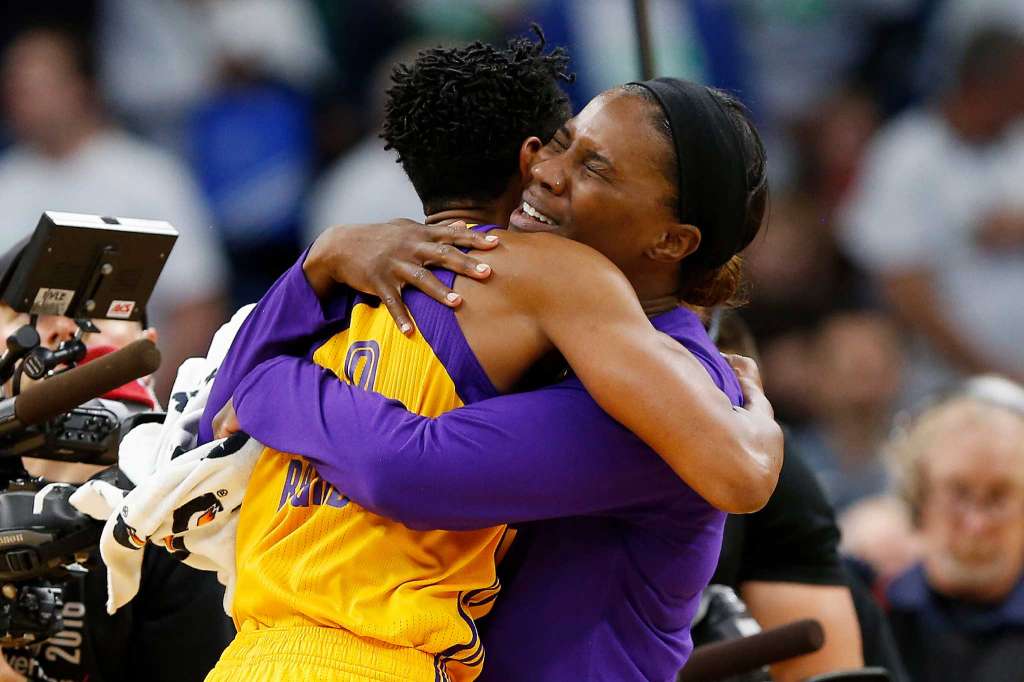 Beard saved Game 1 of the 2016 WNBA Finals between the Los Angeles Sparks and the Minnesota Lynx from being a close shave.

Hitting the bullseye at the Target Centre buzzer, L.A.’s Alana Beard drew a bead on Minny’s Maya Moore in the corner and drilled home a clutch three at point blank range with just seconds to spare as she slid back downtown.

As the Sparks shocked the defending champions and top seeded Lynx team 78-76 for one in the win column they took a commanding lead in the best of five Finals series. Expect this one to go to the wire though for the two teams who began this season with 11 game unbeatable records until they faced off with each other.

Minnesota prevailed in that one but Alana made sure that would never happen again as the number zero got her Nick Young, purple and gold Lakers brotherhood on and showed some downtown swag. The only thing she didn’t do was step over Olympic Gold winning great Maya Moore like Allen Iverson did to Tyronn Lue in the 2002 Sixers, Lakers NBA Finals. She was too busy picking herself up off the floor, her shot was so good for that.

Beard wasn’t alone in covering the Lynx like Minnesotans face scarfs growing around this time of year. League MVP Nneka Ogwumike had 19 points as did Kristi Toliver. Candace Parker also contributed a cool 14 to show the Sparks have many options to plug you with. Almost as many as the WNBA has legends. As the association honoured the 20 for 20 at the games half. The 20 best players of the last and first two decades of the Womens National Basketball Association leagues inception. As Los Angeles Sparks legend Lisa Leslie watched the new generation of L.A. angels and had a silky smooth reunion with her Jerry West and Elgin Baylor ‘Fire and Ice’ like partner Parker, the Jaamal Wilkes silk to her operator smooth.

Must Read:
Jay Triano: Don't call it a comeback

Fellow Rio 2016 Olympic Gold medalist for the womens national basketball Team USA Whalen had 18 for the Minnesota Lynx, along with the same from Sylvia Fowles to go along with 13 rebounds. Quite clearly motivated by the fact that she should have been honoured at half-time instead of hearing it from the Lynx coach in the home locker room. Still if Minnesota want their own rings come next season and the end of these finals they need more from Moore (who left the game with her head in her hands) and this pack needs to let the wolves out.

Otherwise it’s going to be a Hollywood ending in this wild west world showdown.

Time to go to work.