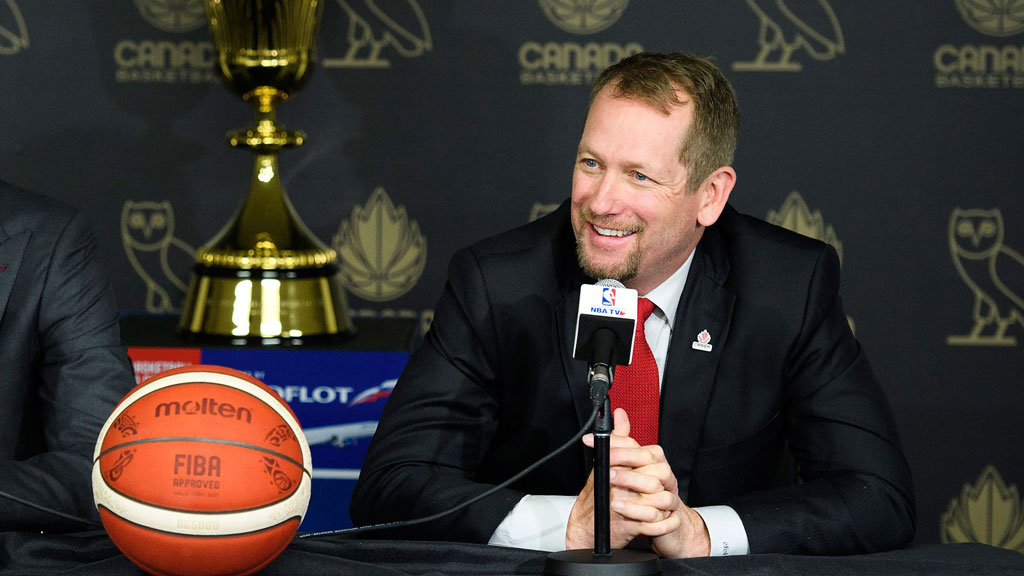 Rocking a fresh suit alongside a red tie and a Canadian pin flag, Nurse expressed gratitude and humbleness “truly honored to be sitting here in this position, I’m really am. Obviously, the last couple of months have been very humbling and really amazing to see the country, the city and everybody get excited about basketball in this country.” opened up Canada’s newest head coach during the press conference.

Nurse’s contract obligations with Team Canada are expected to last through the 2020 summer Olympic games in Tokyo. No salary details were released.

“I’m looking forward to working with this talented group of young players, and to seeing what we can do on the competitive global basketball stage. I love the international game.  I also see this as a real chance for me to learn from the world’s best, and for us to represent Canada with pride and distinction.”– expressed Nick Nurse.

Canada Basketball has been searching for a replacement since veteran head coach Jay Triano decided to step aside from the job on March 25, 2019 – as he was asked to re-apply for the position by general manager Rowan Barrett.

“Nick fits our Gold Medal Profile as he is a proven leader with extensive experience coaching FIBA, NBA and other professional leagues around the world.  His coaching pedigree shows his ability to win at some of the highest levels and he has a tremendous understanding of the FIBA game and our Canadian NBA players.  We strongly believe that this unique combination gives our players the best opportunity for success at the FIBA Basketball World Cup 2019 and the Tokyo 2020 Olympics.” added Rowan Barrett.

After a long a interview process that further extended due to the Toronto Raptors’ winning their first-ever NBA Championship — Peter Yannopoulos and confirmed on by various sources — that Nick Nurse who will be responsible for leading what is expected to be a star-studded Team Canada and the upcoming 2019 FIBA World Cup.

Herbert is also expected to take over the coaching duties at the 2021 FIBA AmeriCup Qualifiers formerly known as FIBA Americas Championship. The tournament pits together the top teams from the Western Hemisphere and currently scheduled for November.

The rest of the coaching staff will be announced in the coming days. Canada has loaded exhibition schedule and is expected to face tough opposition in the group of death at the 2019 FIBA World cup in China.