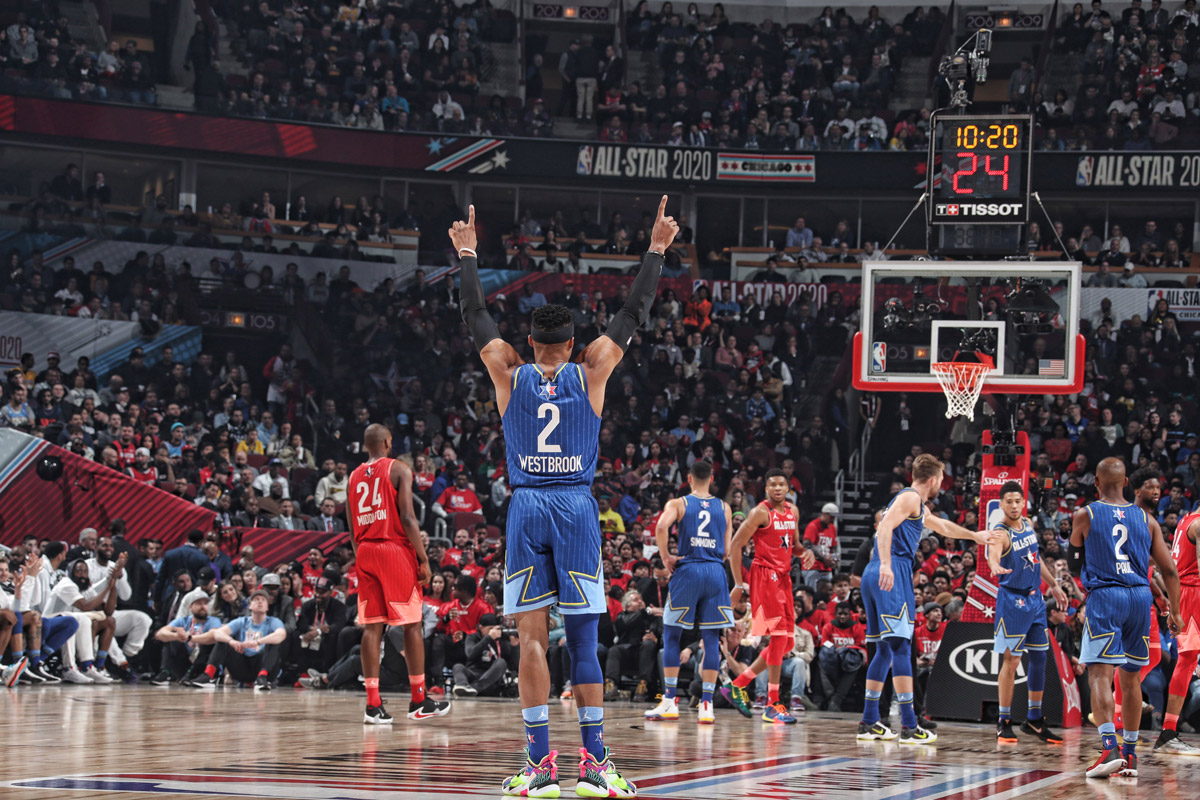 Like Eliot Ness, that’s what Common’s city of Chicago is when it comes to this court. All greatest of all-time thanks to the statue outside the United Center that they have to bring in from the cold when ice gets in it’s cracks like the veins of new Minnesota Timberwolves cold front player, D’Angelo Russell (he should be here. These lost Lakers are just glad Brandon Ingram is). Forming a duo with Karl-Anthony Towns as dynamic as that one of Star Marbury and the uncut gem of Chi-towns own Kevin Garnett heading for the Hall.

And just like the Big Ticket, the Rose that grew from concrete and the way of Wade who was moved to tears, the rapper slash actor, author and Microsoft poet Common (who fittingly won MVP of the Celebrity Game in his city. Even after Kenny ‘The Jet’ Smith said “c’mon Common you can’t even dunk donuts in coffee” after giving Dwight Howard’s athletically graceful, camera flash freeze, cheese smile, spin dunk an 8 (Kobe?)) put on for his city like Barack Obama and of course the statue of the G.O.A.T. M.J. with a poetic rap that waxed lyrical on hoops history and it’s nuanced nostalgia.

Shouting out the real King MLK and Kobe before Magic made a moving speech, all players behind him dressed in warm-up white and Jennifer Huston brought the not a dry eye in the arena, house down with her tribute that beat the hardwood like the commercial Dr. Dre one for this California love in Chicago, like the National Anthem of treasure Chaka Khan in a 23 jersey.

Common also had rhymes for each player introduction for all those who would take to the floor dribbling across the Chicago skyline, as he rocked the mic like fellow Chicagoland legend Chance The Rapper halftime and injured All-Star Dame Lillard, who still got to play this weekend as Dame D.O.L.L.A. The first player to perform on this stage of Basketball’s Grammy’s, bringing out ‘Tha Carter’ himself Lil’ Wayne and a Mamba Forever leather that we all want to cop for this year’s Winter jacket.

From saying “Sixteen-time all-star, three-time NBA champion/ We continue to witness his reign / One of the greatest to play the game/ From the Los Angeles Lakers, LeBron James”, to “A four-time all-star / He handles the rock like Gibraltar / From the Boston Celtics / Give it up for Kemba Walker”.

But hey, I’ve got one for you all, “like the Beard and the Brow he runs the show/so where the f### is Alex Caruso”.

But to the beat of his own raps and his milk carton brother Kanye, even if every event was set off by the “GO” vocal of guitar hero John Mayer on his Common collaboration with ‘Jesus Is King’ walking God, Mr. West (from the bam, bam Bam Adebayo BAM Skills Challenge bucket win. To the Buddy Hield buzzer beating on the last ball of the last rack, Devin booking, beating and winning the Three-Point Shootout (still one of the best and most underrated events of the weekend)), this night of all the All-Stars was all about the one who should have been in the crowd cheering with his daughter courtside.

From Superman, Dwight Howard returning and bringing back the red cape out of the phone booth, with 24 on the chest, to Man Of Steel and former Lex Luthor like enemy Shaq filming on that old camcorder again. In one of the best but most controversial dunk contests that saw an all 50 and 7-foot-5 Tacko leaping Aaron Gordon robbed again like when he cleared the mascot (seriously I don’t mean to leap to conclusions, but these guys need to get over jumping over things…literally. Only Leonardo DiCaprio gets over this many people).

This time by the South Beach, bringing the Heat in the Windy City, tornado storm of Derrick Jones Jr. Air Gordon won’t be back (thanks for that judges. Dwayne Wade said in the Skills Challenge his mind can be changed…ain’t that the truth), but let’s hope the backboard ball touching, Woody Harrelson Venice Beach wear honoring Pat Connaughton will be. Because white men can jump too in an epic exciting weekend of Chicago, 2020 that in the Olympic year of Tokyo, 2020 showed all the world’s a Basketball stage like the Rising Stars game (Konichiwa Hachimura).

For the main event of the biggest weekend on the schedule itself Team LeBron all wore number 2 on their blue jerseys for GiGi and Team Giannis 24 forever for Kobe (a bald Khris Middleton even sometimes from the nose bleeds making it look like Mamba was there…which spiritually he was like his mentality), to another LeBron like Kobe dunk running the floor like Bean and the 24 second shot clock that decided the fourth quarter of an entertaining All-Star Game that was more than the legendary lay-up line and was actually a competitive affair.

That’s just what happens when you win the game on a free throw (157-155, King over Freak) as Laker and hometown Chicago hero Anthony Davis did the honors after filling the stat sheet with the game on the line. But, the All-Star MVP now beautifully renamed the Kobe Bryant award went to another Los Angeles King in Clipper Kawhi and his 30 points. Who dedicated his award to the late legend it’s named after, as fans had their fill of their favourite weekend of the mid-season they love like the hearts of a mid-Feb Valentine.

Just don’t ask him what he had for dinner.

For Team LeBron. For Kobe. For GiGi.