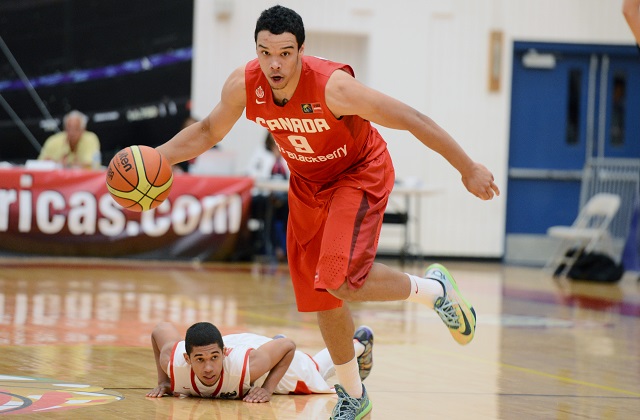 Colorado Springs, Colo – The 2014 Canadian Junior Men’s National Team (JMNT) pulled out another convincing victory at the 2014 U18 FIBA Americas, earning a well deserved 91-67, (24-point victory) over Puerto Rico. Canada topped the group A standings with a perfect 3-0 record and qualified for the 2015 FIBA World Championships in Greece.

After two spectacular performances off the bench, Canadian Head Coach Roy Rana had no choice but to insert Dillon Brooks into his starting line-up and his 18-year workhorse responded my pouring in 27 points on 9-of 17 shooting (53%) to lead the Canadians to a comfortable victory.

Brooks also added six rebounds and six steals while leading the Canadians in scoring for the third consecutive game.  Havard Crimson commit and National High school champion Chris Egi (Montverde) also had his own with the soft Puerto Rico interior defense and finished with a 20-point, 14-rebound double-double while swatting three blocked shots.

Canada dominated Puerto Rico from the jump as Egi and Brooks scored 16 of Canada’s first 18-points. Gatineau, Quebec 6’9 centre Biniam Ghebrekidan came off the bench to pulled down 9 rebounds and 8 points as Canada out-rebounded the Puerto Ricans 51-26 and a 50 to 18 advantage in points in the paint.

Puerto Rico who never led in the contest outscored Canada 30-22 to cut the deficit to a respectable 21 points when it was all said and done.

Canada (3-0) advances to the semi-finals and will face a tough Argentina that went (2-1) in group B, with their only lose coming to the United  States of America.