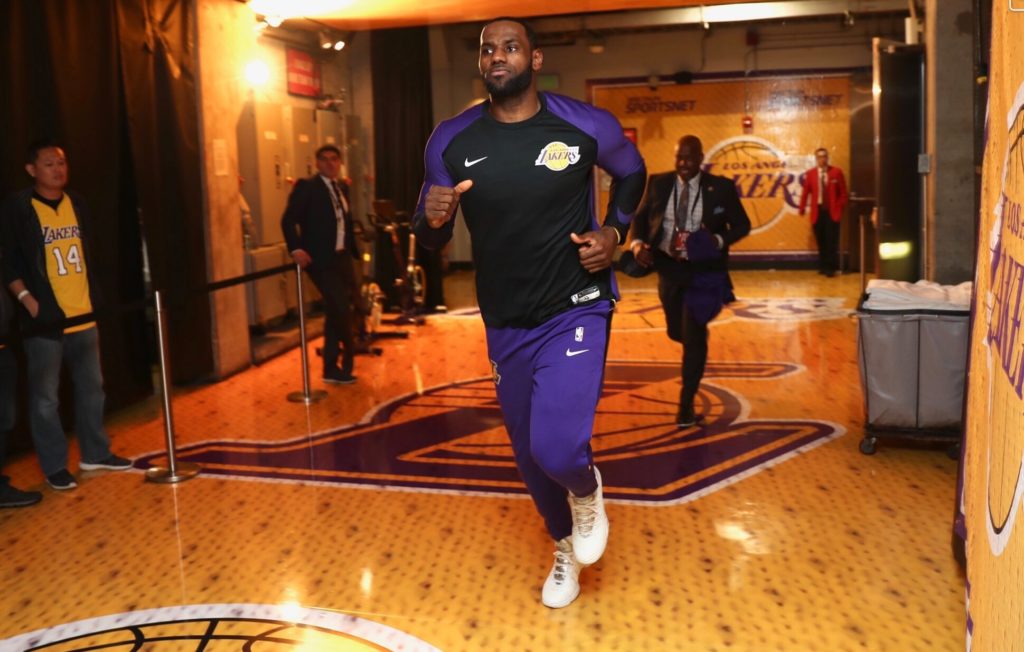 Alleviating pressure does wonders for the soul of managing that load.

Carrying the weight of great expectations, worse injuries and the insult to the young core of a pitched trade for New Orleans Pelican Anthony Davis that came back like a script proposal to have ‘Space Jam’ 2′ star Sam Bowie or Darko Milicic, the Lakers 2018/2019 seasons playoff campaign ended on Friday night. And it was all iced off the glass of a Hollywood hangover, as the former Point Guard Magic said couldn’t lead, Brooklyn boy D’Angelo Russell shush silenced all that and his former squad into elimination in the clutch on his way to taking his team beyond predictions to the postseason of the playoffs.

But after that humble pie slice of karma they’re probably now serving at ‘Shaquille’s’ outside of STAPLES as just desserts, the Lakers staying at home with nothing to play for in terms of the playoffs put on their weekend whites and gave their level up best, making Sunday funday again.

The show goes on (DiCaprio in ‘The Wolf Of Wall Street’ voice).

Snapping a five game losing streak which put their season at stake instead of turning into the next Philly process like a staple in downtown L.A., the King and all his men took the Kings in a chess game of a contest just depressing days after their own checkmate to the new Notorious biggie baby, king of New York from the B.K. (and if you don’t know. You better Robert Horry check a SLAM magazine or something). All in for a California clash with the Sacramento Kings that serves as the perfect precursor to a revival rebirth of a rivalry with these two young teams (the best thing to come out of Sacramento may be Jessica Chastain, but damn if the Kings have a team to crown right now) that stretches back to the Shaq and Divac days.

This one went to the hack-a-King wire like Kanye’s jawline. But clenched teeth through it all withstood the end of the line and LeBron even made his free throws as the Lakers prevailed 111-106. Making a statement in this game like those crisp alternate jerseys, although punching some lottery ticket blocks on their road to Zion. Which is fine by this writer. As although with the joy in my world like Lauryn Hill hopefully being in Zion, I want the Duke more than I need a date with the girl I met in Starbucks (that may not be true…we’ll let you know how that one goes), my favourite R&B singer may be Tank, but I can’t stand tanking. It’s killing this game like gambling. Change it.

Must Read:
Patrick Beverley Doesn't Give A F...

Rebounding after his 8 turnovers and we’re sure the no sleep he got after Brooklyn, James made good on his “the spell won’t last” Instagram post (“believe” that “promise” like when he took everyone to school to begin this recreational year) as the marathon continues to the tune of his eighth double-double of a season were he has more than carried the load whilst being kicked in the groin. According to his physical therapist he should have shut it down earlier this season when he missed a Rick Fox or Andrew Bynum 17 games. So D’Angelo Russell silence those gums. We all have troubles, like we do with the ones we love. Even the greatest King isn’t immune. And we for one take back many of our frustrations. But not with that trade and the actual one you pulled off with turning Zubac into the next Randle and Russell, Magic and Rob.

And with 29 points and 11 in both rebounds and assists with some trademark hulking hammer or Thor dunks this Iron Man stripped of his Captain America shield was still a Hawkeye marksman as he moved up the all-time downtown list, no Thanos dust in this endgame after the war. The ball movement was royal appointment exquisite too, from the signature play to McGee (17 and 14. He’s had a hell of a season) to one play to a dancing with the dunk Lance that brought the Van Halen’s out. King Kuz also had 29 like James in this game, as the new Showtime that will still be renewed for another season outlasted Sacramento’s Buddy. As Hield tries to field some swinging for the fences, baseball like big hitters in this game that would ground the Lakers. But in the end the King and all his Lakers had the King’s and their big Bagley (25 and 11 as Marvin got it on) in the bag.

Now as the Lakers season that is still far from over closes out to the Summer of their real one, the front office just need to keep the kids, stop sending memes like trying to talk to the one you like (hello) and surround the King with a moat of closers with arrows that can help watch the throne.

The crown may have slipped, but with California gold looking to purple reign with the King and his princes it’s still a good fit.

For a you know what.