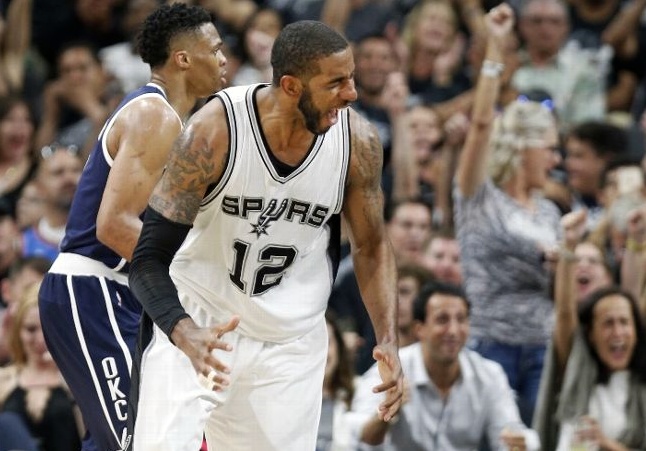 The NBA semifinals are underway, and, so far have been nothing short of sensational. But, of all the great players, teams, and coaches still fighting this post-season one stands out as, clearly thus far, the best player in the NBA.

He is none other than LaMarcus Aldridge of the San Antonio Spurs.

The newest free agent signee of the San Antonio Spurs has been on a tear against the Oklahoma City Thunder.

In the first game of the series he scored 38 points on 18/23 shooting only to follow it with a 41 points on 15/21 shooting performance. He is the first Spur to have back-to-back 35 + points performances in the playoffs since Tim Duncan in 2003.

At the beginning of the season, Aldridge struggled mightily to find his groove in the Spurs’ system with the nadir coming on January 25th, in the form of a 30-point beat down to the Golden State Warriors. In that nightmarish game, Aldridge scored five points on 2/9 shooting.

Due to the hellish start of his season some people thought his signee was a bit of overrated; however, in a true Spurs fashion he aged well.

From October until mid-January, Aldridge averaged 15.9 points per game on 48.7 per cent from the floor. While this may be a career year for most players, it was well below his anticipated production. And, on top of his lack-of-production – by his standards – the Spurs were about to be dealt a new blow. Tim Duncan would miss some time with right knee soreness. But, Duncan’s soreness turned out to be a blessing in disguise for the new Spur as he found himself.

Since then LaMarcus Aldridge has been firing on all cylinders for the Spurs, and helped them to the greatest regular season in team history. In any year, the 67-15 Spurs would have been, against their will, the talk of the media, but the 73-9 Golden State Warriors and the drama surrounding the Cleveland Cavaliers overshadowed them.

Now, as they prepare for Game 3 of the Western Conference semifinals against their newly archrival Thunder, the most dominant franchise of the past decade has gotten even better.

The former “Big Three”, Tim Duncan, Manu Ginobili and Tony Parker, is still intact but a new “Big Three” is emerging with Kawhi Leonard and LaMarcus Aldridge as the catalysts, and either Patty Mills or Danny Green as the third member.

One of the big reasons behind Aldridge’s early season struggles is because he plays a very similar style of basketball to Tim Duncan; therefore they were stepping on each other’s toes on offense, and in a way neutralized each other.

Since coming back from injury, Duncan has gladly accepted his role as a mentor, and passenger on the Spurs bus driven by number two and 12. He has become a secondary scorer on the team, to his and the team’s benefit, and moves to help free-up Aldridge as oppose to score.

Although Aldridge can muscle his way in the restricted area against anybody in the league, his strength lies in his mid-range jump shot. Coincidentally this is Duncan’s strength although Aldridge has much more range than Duncan.

In the first two games of the series against the Thunder, Aldridge has ran a number on Serge Ibaka and Steven Adams with his devastating jumper. The Spurs use pick and roll and screens to free him from his defender.

Must Read:
Air Atlanta...Vince Carter Will Soar One Last Time As A Hawk

What makes the Spurs’ signing of LaMarcus Aldridge so deadly is that both the Spurs and Aldridge have become famous over the years for pick and rolls, screens, double-screens, and mid-range jump shots.

LaMarcus Aldridge was destined to be a Spur, and his signature could not have come at a better time.

Thus far in the series, Aldridge has connected on all 11 free throws he attempted, including the three free throws with 13.5 seconds left in the game and his Spurs down by four. The former Trail Blazers scored .783 per cent in game 1 and .714 in game 2.

Billy Donovan, the rookie head coach of the Thunder, has, so far, refused to double-team the Texas alumni or try defending him with Kevin Durant. The main reason that has Billy Donovan reluctant to switch Ibaka and Adams with Durant is Kawhi Leonard.

Leonard is the best player in San Antonio. The Spurs will go as far as he takes them. For all of LaMarcus Aldridge’s greatness, he takes a back seat to Kawhi Leonard.

This season, and most likely for the near future, the Golden State Warriors will hold headlines, breaking news, and magazine covers, but the San Antonio Spurs will respond, in a homegrown fashion, with their play on the court as oppose to the cameras.

Who knows what the future will hold for the franchise based in the Alamo City, but if the present is any sign of things to come Spurs fans are in for a treat, and another 15 years of championship aspirations, and greatness.

Despite the headline-grabbing Warriors (rightfully so!), I believe that the San Antonio Spurs will win the Larry O’Brien Trophy, and be crowned World Champions in 2016, and LaMarcus Aldridge will be Finals MVP (if he keeps playing at this level).