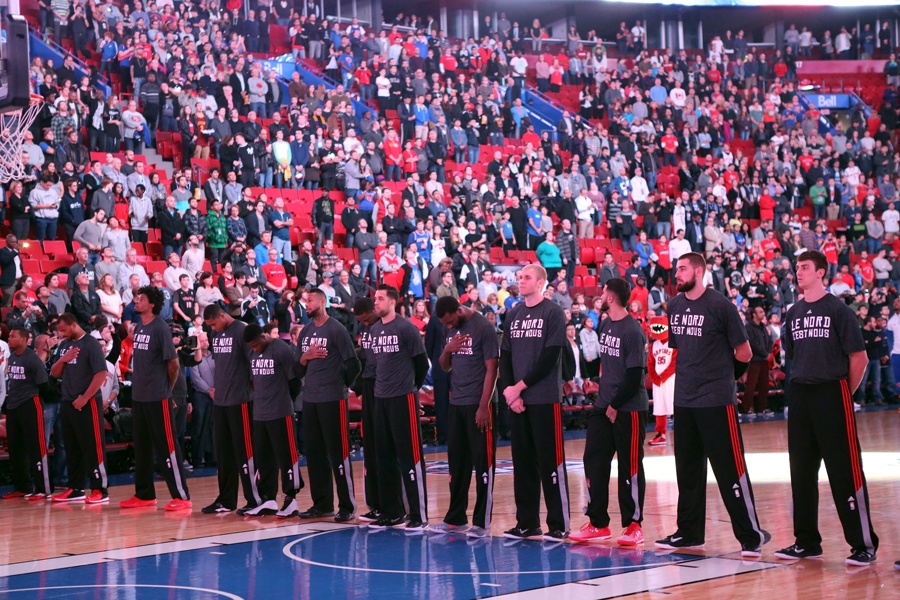 Raptors versus Knicks in Montreal – Much more than a Game!

The preseason game played between the Toronto Raptors and the New York Knicks at the Bell Centre in Montreal was about much more than basketball. It was about two teams trying to make final adjustments before the real games start, it was about Samuel Dalembert coming home to play in front of his hometown for the first time and most of all it was about Montreal showing enough passion for a teams that they do not call their own in hope of one day having one for themselves.

The Knicks could have easily have won this game, a lack a consistent effort cost them a game which they easily could have won but instead lost 80-83.  When asked about some of the team’s lapses throughout the game head coach Derek Fisher said, “We worried about not making shots instead of continuing to stops. The effort tonight was where it needed to be, but have to continue to clean up our execution.” Carmelo Anthony opened the scoring by hitting a three much to the delight of the crowd. The Montreal fans seemed to be split into three categories; 50% Toronto fans, 40% Knicks fans and 10% Carmelo fans. Though he was booed at the free throw line, the crowd cheered every time he hit a bucket. Along with hometown hero Samuel Dalembert and Toronto star DeMar Derozan, Melo probably received the loudest cheers throughout the night.

Just like Vancouver, Toronto’s preseason game was a sellout. However, Montreal fans did their best to imitate the Miami filling in slowly, but surely. By the second quarter the Bell Centre was full. The referees had a hot whistle for the game, giving a handful of technical fouls. For most of the third quarter both teams played their second units resting their starters. The Knicks however played Melo deep into the third giving him the entire fourth quarter off. Toronto meanwhile brought their starters back in for about half of the fourth before Coach Casey called it a night for them.

Before tipoff, Samuel Dalembert, a former Montrealer addressed the crowd in French to the delight to everyone in the building. “The crowd was really in it. They were cheering for both teams at the same time. I was excited. I was in front of friends and family. My first game in Montréal, hopefully next year too.” Though it was his first game in the city, Dalembert was not nervous nor was he distracted by family and friends trying to get tickets from him. “I buy them and then my cousin does the rest. I focus on the game,” he says. Despite the loss, Dalembert was smiling throughout the whole game and even afterward you could see it meant a lot for him to play in his city. A whole section on the west side of the arena was drapped in blue and lifted a banner that could read Dalembert’s Army. The Montreal native finished with 2 points, 2 steals, 3 assists and 10 rebounds.

For a second year in a row, Montreal sold out a preseason game. Last year, the Bell Centre was packed for the Timberwolves and the Celtics. Despite the debacle with the Grizzlies, Vancouver has long been seen as the first choice if a second NBA franchise were to be brought to Canada. However, Montreal should be seriously be considered a city that could have a team. Yes, Montreal is a Habs town, but Toronto is a Leafs city and the Raptors have one of the best attendance in the league. Montreal has also shown that it will ride and die with a team that is competitive.

The Olympic Stadium was sold out every night when the Expos were at their peak, like Habs season tickets, finding tickets for the Alouettes could often be like finding a needle in a haystack during the Cavillo years and the Impact had one of the loudest home crowds in North American soccer before the move to MLS was made. Of course, it will take time for Montreal to grow it’s own fan base for a NBA team. It took almost a generation for Toronto to have pure breed Raptors fans and the same could be said for the Ottawa Senators in the NHL. The game shown last night showed that basketball allegiances in Montreal are divided. That being by the fourth quarter the crowd was much more loudly than a playoff Brooklyn crowd; and it was a preseason game! There are a lot logistics to figure out for Montreal to become an NBA city but two of the biggest one have already been cleared; a downtown arena and a city passionate about basketball.

What the NBA needs to realize is that this game would have been a sellout even if it had been the Bucks and the Magic playing. Basketball is growing in Canada and whether it’s Vancouver or Montreal, Canadian basketball fans are begging for more basketball than the Raptors. Though there will always be love for “Canada’s team” from coast to coast, breaking the monopoly Toronto has on the NBA in Canada would not only be a great move for the league, but also for basketball fans.