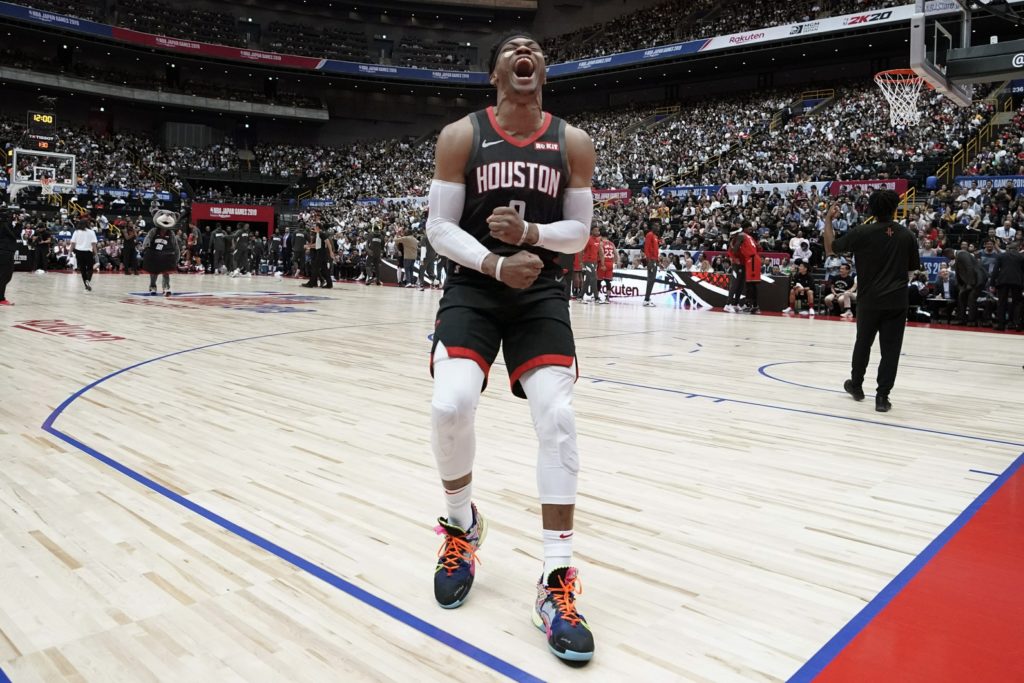 Big NBA exhibitions in Japan. Who says a pack of Raptors can’t take down Tokyo’s very own monster Kaiju, Godzilla? Even without the LeBron or Kobe first named basis Kawhi anymore, the Toronto Raptors proved they were still reigning champions as they beat the Harden (despite 21 first half points) and Westbrook reunited (and it feels so good), soaring Houston Rockets 134-129 in the first of their Japan Games twofor series in Tokyo’s Saitama Super Area, Tuesday.

But Canada’s very own BasketballBuzz was in the house for the Thursday rematch, for our We The North vs Houston home-stand. Although the red lined court design looked so 6 you almost expected to see Drake courtside picking lint out of James Harden’s beard. You could really see real Raptors superfan Nav Bhatia though (I mean he never misses a game and yep he was really here. Did you really think he was going to let something as little as a continent stand in his way?). NBA big-man Raptor and Rocket legends, Chris Bosh and Dikembe Mutombo (wagging his iconic digit like “Batsu”, with the fans McDonald’s loving it), Japanese tennis ace Naomi Osaka and sumo wrestling legend Konishiki were in attendance however. In the Far East on the 55th anniversary of Tokyo’s 1964 Olympic Games.

On this day Yoshinori Sakai, born on the day of the Hiroshima bombing 19 years previous carried the torch we know as the Olympic Flame. This epic, exhibition event the perfect precursor to next year’s 2020 Games and the race for hoops five ring gold in this land of the rising sun, host nation, capital city. With this writer supporting the Toronto team he once lived in tonight, trying to make a teaching (and who knows maybe one day coaching) dream come true in this big city of bright neon lights holding on to his ticket on the subway like a Willy Wonka golden one Charlie.

As after losing to the dinosaurs in the first roaring round, the beard of Houston’s James Harden caused unintended problems as he made some comments in support of Hong Kong protesters in the Far East, that lead to Commissioner Adam Silver backing him and the right for free speech up and then China itself going dark on the NBA across the continent. Clawing down billboards of the forthcoming Lakers and Nets games in Shanghai and Shenzhen (good job this purple and gold bleeder didn’t book that extra flight) with LeBron and A.D. company having no WiFi and no clue what was going on. Just like most of us refreshing our timelines. The game went ahead in the end with Brooklyn netting the Lake Show, 114-111 in their first of two round.

But as Harden stirred the pot like his classic celebration and professed his love for China, not even a typhoon on the way this weekend for their whirlwind week was going to stop Tokyo’s Basketball banner moment. It has been a fast moving seven days for the most innovative city on the planet. First rock God Lenny Kravitz assembled his Hollywood rich and famous, Dom Pérignon bottle popping, black and white photo gallery Assemblage exhibition in the fashionable district of Harajuku in Shibuya and now crossing over this game has gone global. With games of the NBA’s best also being exhibited in places like India, Mexico…and hopefully China too.

Tokyo’s massive population came out in their sold out droves for this one. As they proved they were as excited about these two teams (Houston’s rise in the Far East goes as far back as Yao…so you can imagine the fallout. Time for the Ming dynasty to step in) as they are for Japan’s very own top ten pick, the Washington Wizards Rui Hachimura or last year’s hustling Memphis Grizzlies big man of the future, Yuta Watanabe. With Harden, 13 and Siakam, 43 jerseys lining the bleachers. Although both teams missed a trick playing in their respective reds and whites for the flag like Canada.

Now that would have been a statement.

They were made in the game however after the “ooh’s” and “ahh’s” of the lay-up line putting on a show for Tokyo came the running and screaming for the Jurassic Park vs Apollo 13 franchises. What more could you expect for the first NBA game in Japan since 1991? Although this city and country has been immersed in Americana culture of that decade since years before then. With a 7Eleven and Starbucks on every corner like Eric Gordon going for back-to-back threes downtown here.

The hoops hoopla didn’t disappoint either as the 2K new to the NBA live generation were kept entertained in this gladiator arena by Clutch and Raptor mascots, fan events and that old timeless t-shirt tossing…no matter what size you are, you’re grabbing for those sleeves like it was the New Year sales. Despite Raptor Kyle Lowry being milk carton just days after announcing he was re-upping for a year next season and not pulling a Kawhi via The Players Tribune. And NBA and FIBA world champion in the same Summer (that’s a record right?) Marc Gasol coming off the bench for some brief burn like touching a plate you had warming up in the oven for too long whilst you were waiting for an overdue pizza delivery. Albeit to cheers like he was a Hall of Famer. Come to think of it little brother and this generations Vlade Divac is one. Especially when you take into the account older Pau is the second best European player of all-time and only a fraction better than his sibling.

Or the Harden/Westbrook tandem-both scoring 22-being in foul or slumping trouble when they weren’t jack knifing their way through the paint butter for some geometry defying lay-ups. Cutting a hardwood path to a 118-112 Rockets over Raptors victory bite back. Seeing James do that dribble, step-back, rug and court cutting shuffle-especially in a pink P.J. Tucker sneaker king approved pair of kicks that he threw into the crowd like a rock star does drumsticks post set-is one of this age games eight wonders like Russell’s athletic enthusiasm as he runs to his corner like Ali or A.I. Screaming for the fans to get pumped.

It was Clint Capela (10 powerful points to go with 7 rebounds and 2 big blocks) and even his veteran back-up, big Tyson Chandler who came up big off the block or oop before the reserves cleared up the garbage like Japanese soccer fans the World Cup stands. Making sure those in court regalia passing the salary men on the escalators to the last train left satisfied and with both teams taking a game, content in the Yin and Yang feeling that this was just one half of a whole lot of world wide spanning and spinning basketball that Tokyo is about to see in 2020.