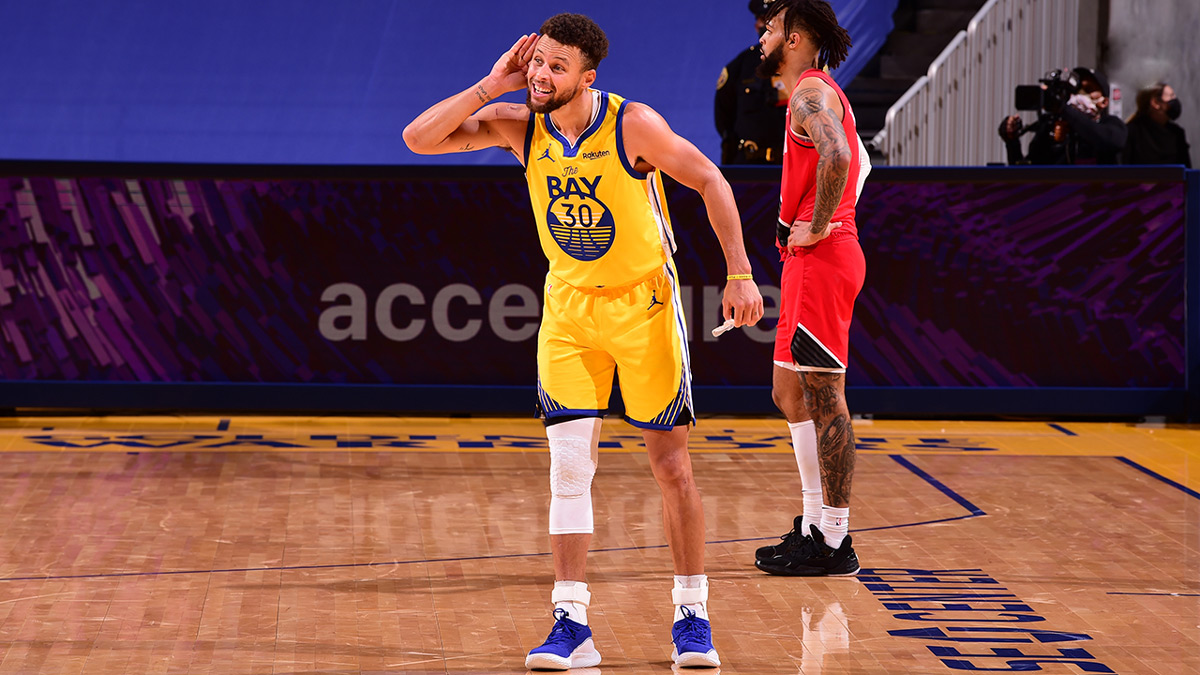 Steph Curry with the shot?

Nah, Steph Curry with the, “shut your mouth!”

All the way up.

I don’t know why people still believe “Twitter takes” serve as in-depth analysis. They don’t. Sure they may go viral, but so do viruses. These are the same experts who believed ‘Melo was done and LeBron on the throne with his “damn respect” was a “Washed King.” So much so, James hash-tagged it.

Now with all due respect to the legend of Larry Bird they are coming at the greatest shooter of all-time. Well…lets make that past-tense. They WERE coming at Stephen Curry until he shut them all up and shut it all down with a career-high 62 in a 137-122 take down of Dame Lillard’s Portland Trail Blazers.

You know who was blazing this game, just as people were debating over who was better these days.

Sliding down the court on his front like this Splash Brother was on a ride at Splash Mountain. Aeroplane taking off on his way back down court after flying-high off that excited, knees-up run. His teammates chasing him down the floor of San Francisco’s otherwise empty Chase Center. Being doused with mineral water like he did his back-court bro Klay Thompson when the Human Torch went for 60 off of 8 three-pointers made too in December 2016. The gum-shield hanging out the mouth.

All as everyone in the collective association and social media’s jaws dropped as the Splash Steph went into Spielberg shark mode.

There must be something in the water of The Bay.

Must Read:
They Got It Wrong About D'Angelo Russell

Even D’Angelo Russell lasted less time here than he did on the other side of California.

Yet they came at Steph like all those quadruple teams…and they wondered why it was so hard for him to find his shot.

Look at it rainbow now, he’s letting it play in a rhythm that hits him like Rakim. God M.C. Pure P.G. GOAT for GOAT. Washed? Nah!

“Cue the Jordan meme” Steph said. No not the crying one. That’s for everyone else now. The other one. You know. “I take all that personally.”

All that Steph slander huh?! Just a bunch of “Twitchin’ Tweeters” who think this game plays out how they simulate it on 2K without ever actually watching. This is the real thing! The man who changed the game, “did the impossible then, did it twice (get it right)”, like Jay-Z.

If it’s too hot you know what to do with the kitchen, because this is his house and Seth’s big bro with the Dell DNA threw everything like the kitchen sink at the washing basket. Leaving all those tweets like waste paper. No wonder that stuff never gets printed.

It’s time to focus forward and on the good people on social media. Like Myles Turner tweeted, “bro I better not ever see no more Steph slander on my TL, bro stay shutting people up.”

Who cares about an applications time-line when you’re applying yourself to the history books in the company of the likes of the legendary Kobe Bryant with that Mamba Mentality. Foaming at the gum-shield with true Warrior venom.

Must Read:
The LeBron Series - The King takes his Throne again

We’ve always believed. From the lightning bolt jerseys to the cable car ones. Down the line number 30 has always been electric.