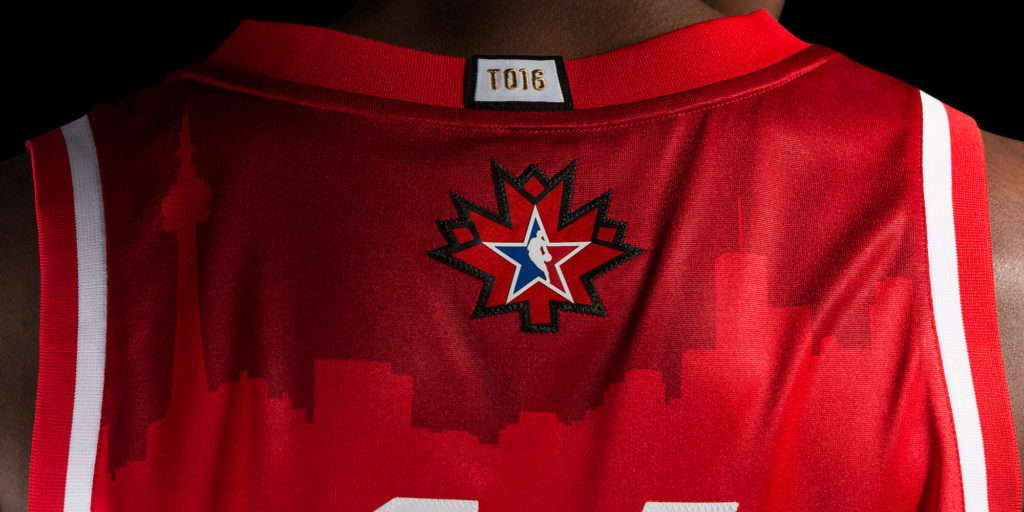 Canada made basketball history with one of the world’s most famous teams that play in that arena called Madison Square Garden, as the Toronto Huskies suited up against the New York Knickerbockers for the first ever game to tip off for the National Basketball Association.

Over a half century later and following the classic New York trends of last years A.S.G in N.Y.C.’s M.S.G., the first ever NBA All-Star Game to be held in Canada next year will outfit the stars and stripes of this great league in uniforms that throw it right back to the first apparel we ever saw on a Jerry West logo court.

Clutching to the beauty of simplicity, Adidas are creating even more on court designs that become instant vintage classics like some of the best uniforms from the 70’s and 80’s before players started wearing their own individual teams colors, before everything changed back again in the new millennium.

In the red corner the West will be the one that somewhat ironically rocks Canadian colors with their red and white jerseys with the same Toronto typography from the forties. Whereas in the blue corner the East will sport a white colorway with blue writing and short trim that are almost reminiscent of the Raptors T-Dot baseball, Rogers Center neighbors, the Blue Jays. Yet these jerseys in essence hark back to the hallmark colors of the Knicks and Huskies who on the first of November in ’46 recorded the first ever game in NBA history for the books.

Honoring more of Canada and the Toronto hosts of next years mid-February classic, for all those valentines that love the game, these unis feature maple leafs, the city skyline and even a Raptor claw etched into the shorts, paying respects to the sole Canuck franchise that calls the view from the 6 home.

All these trimmings complete what are possibly the best uniforms that the NBA have produced this year in a locker room of new looks, redesigns and alternatives from almost every team that are cutting the edge back to the classic court look of golden era days gone by.

These duds are even better than the new and similar Toronto Raptors jerseys that have come out this season courtesy of Octobers Very Own. This is even better than Mr. Hotline Bling dancing on Drake Night. What a time to be in fashion line. All this past is the future.

You’ve got to love the nostalgia of history.

These Adidas jerseys sponsored by Kia and sporting the car logo on the right lapel (hopefully the biggest team sponsors will get on these still sacred NBA jerseys, almost giving way to commercial spoil), will retail in the New Year, January 21st after all the All-Stars from the NBA are selected (you can cast your ballot from the 10th December), from the retiring tour of Mr. 81, Kobe Bryant to the Raptors very own Kyle Lowry.

What could be more fitting for these uniforms in this Toronto game that not only honors the city outside the United States that held the NBA’s inaugural game, but the anniversary of the man that invented the game? Mr. James Naismith…a Canadian.