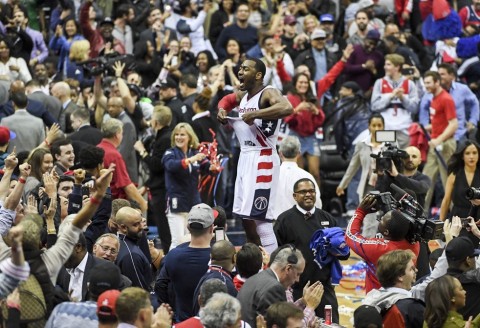 Death at a Funeral.

Normally objections only happen at weddings, but John just had to protest. After the Boston Celtics came into Washington dressed in funeral all black, looking to close the Game 6 casket on the Wizards, Wall got in the way of all that. As he went full zombie mode with 3.9 seconds to go in the Isaiah Thomas quarter. Killing the Celtics and resurrecting the Wizards season for one more spell in New England.

His cold-blooded three with three to go iced the game 92-92 for the Wiz as he went into the Mamba’s muse cage and leapt onto the scorers table like young afro Kobe in the year 2000, popping the Washington on his jerseys chest for the whole city to see.

It was a capital exclamation for his capital city like Jessica Chastain in ‘Miss Sloane’ for his last shot for the one-time Bullets. Moonwalking his shot like M.J. as he went as clutch as the greatest of all-time, Michael Jordan who came out of retirement to play for his former franchise before he faded away. As the clock read the back of Gilbert Arenas throwback gold jersey, the new leader wearing the unis that hoop for the troops owned this game, like the moment his.

But most importantly the redeemed and rejuavanted superstar John Wall forced a Game 7 and new MVP conversations in arguably the best series of the playoffs in the changed guards greatest season without a shadow of a doubt.

“I’m not going out without a fight”!

Wall banged for 23 of his 26 points in the second half. Matching Boston’s Mr. Fourth Quarter, Isaiah Thomas who had 17 of his 27 following the basket change after both the pure scorers cancelled each other out in the first 24. The perfect pair of backcourt brodies may share a lot in this split series, all the way equal down to the next deciding game. But after Washington dressed in all black in the regular season for Boston’s bereavement. On the ropes the Celtics comeback in funeral attire resulted in an imitation that was only flattery. As before the Celtics coffin was closed over the District of Colombia, it was actually John Wall who had the final nail with the dagger.

Must Read:
Busy night expected for Canadians during 2021 NBA Draft

“Don’t come into my city wearing all black talking about it’s a funeral” Wall warned in the postgame post mortem like the Grim-Reaper. As the Celtics reaped what they sowed a new seed of doubt has been planted in their Garden by the House Of Guards who let their trolling idea of imitation fall like a house of cards or a refreshed Twitter tweet.

After Wall turned into Potter’s Platform 9 and 3 quarters in the fourth for the Wizards. Washington just won’t go away like Trump. Reversing the trend, Bradley Beal also had a Kareem 33 in this 3-3 tie as Boston blew a 88-82 lead late like their former C, Gerald Green did to that candle in the Slam Dunk Contest way back when. But this team is far from cupcakes and in the most thrilling series of the season we have no idea who will have the icing. It took a Manu Ginobili block on Harden rivalling clutch play from Wall for the Wizards to get over. But will that be a Game 7 omen amen? Or exactly the same sort of motivation that Boston needs to take advantage of their Celtic court homecoming?

Either way the seventh seal will be a heaven sent sin to miss like a shot with seconds to spare.