When it’s all said and done, Marcus Carr will go down in the history books as one of the greatest Canadian NCAA basketball scorers of all-time.

Carr, a six-foot-two, one-hundred and ninety-five pound (195 lbs) guard from Toronto, Ontario exploded for a career-high 41 points in the Minnesota Golden Gophers close 78-74 loss to the Nebraska Cornhuskers.

The junior guard knocked down 11 of his career-high 27 field-goal attempts, including a season-best six three-pointers and 13-of-16 free-throws.

Marcus Carr scored 16 points in a late 22-10 run that trimmed Minnesota’s deficit to 74-73 with 14 seconds left, but late free-throws by Nebraska sealed the game.

Carr’s outstanding game puts him in elite company as one of only ten Canadian players to hit the 40-plus point plateau. Additionally, his 41-point effort is tied for the sixth most points scored by a Canadian in a NCAA basketball game dating back to 1953.

Washington Huskies six-foot-eight hall-of fame forward Bob Houbregs (Vancouver, BC) skied hooked his way to the most points scored by a Canadian in a NCAA game with his 49-point game against Idaho on January 10, 1953. Houbregs is also responsible for two other 40-point outings including 45 and 42 point games against Seattle and LSU.

Additionally, according to the 2020-21 Canadian NCAA Stats Tracker, Carr is on pace to lead a record 160 Canadians in scoring. In 25 games with the Gophers, Carr is averaging 20.0 points, 5.0 assists and 3.9 rebounds in a team-high 35 minutes per game.

With two games remaining on the Gophers regular season schedule, Carr is on pace to have one of the highest all-time single-season points per game (PPG) average by a Canadian in NCAA Division 1.

Only ten Canadians basketball players have averaged 20 or more points per game in NCAA basketball history, led by Bob Houbregs and his 25.6 points per game during the 1952-53 season. Niagara Purple Eagles forward Juan Mendez (Montreal) was flying high during the 2004-05 campaign with 23.5 per game numbers, good for second on the all-time list. More recently, Duke’s RJ Barrett (22.6 PPG) and Nate Darling (21 PPG) also achieved the mark.

The match-up featured two other Canadians on the Nebraska roster, Dalano Banton scored a team-high 14 points, added 7 rebounds and 2 assists in the win. Shamiel Stevenson also contributed to Nebraska’s winning effort with 5 points, 4 rebounds and a blocked shot.

The Gophers (13-12, 6-12 Big Ten) have now dropped five straight games to fall to 0-9 away from home this season and remain the only winless road team in the Big Ten. 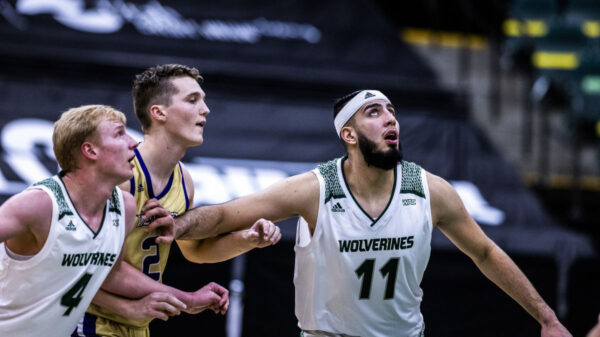