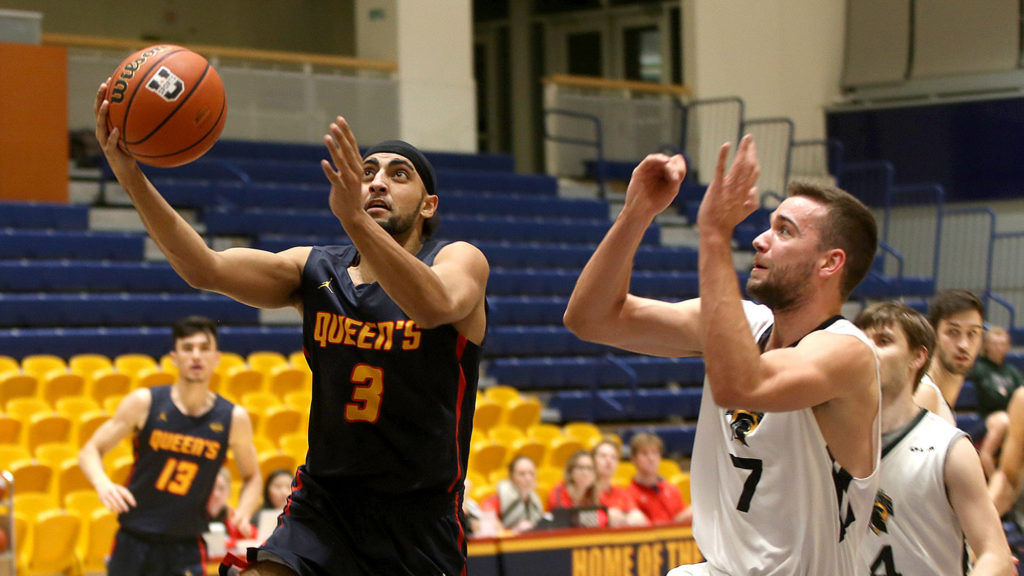 The OUA men’s basketball playoffs begin tomorrow (Feb. 20), with four first-round games that will decide who advances to the quarter-finals.

Bains, a fifth-year guard from Brampton, leads the Golden Gaels in scoring this season with 19.3 points per game.

He was an OUA Third-Team All-Star last season after three seasons with the St. Lawrence College Vikings, where he was an All-Canadian, OCCA player of the year in 2015-16 and OCAA rookie of the year in 2014-15.

Gray has been a one-man wrecking crew for the Huskies, averaging 31 points, 7.4 rebounds and 6.2 assists per game.

The 6-foot-1 guard from Toronto is the OUA’s leading scorer by a mile, and the reigning U Sports player of the year.

Pepin, a freshman 6-foot-6 forward from Montreal and Sabean, a 6-foot-5 junior guard from Port Williams, N.S., lead a balanced attack for the Gee Gees.

Both averaged about 15 points per game during the regular season.

Brown and Pierre have shouldered much of the scoring load for the Lions this season, forming a potent backcourt with a mix of youth and experience.

Pierre has 13 ppg as a freshman combo guard, starting 18 games this season. Brown has 14.9 points, 3.2 rebounds and 2.4 assists as a senior in his fourth year of eligibility.

Ryan, a 6-foot-7 forward from Mississauga, Ont., had 20 points and nine rebounds in Brock’s victory over Lakehead.

He also had 20 points, five rebounds and a steal in a loss to Lakehead the previous evening.

Simpson, a 6-foot-5 guard from Toronto, is Brock’s second all-time leading scorer and fourth in the OUA this season with 20.5 points per game.

Lam, a 6-foot-9 forward from Ottawa, is the Thunderwolves’ defensive anchor.

Traylor, a 6-foot-4 shooting guard from Tupelo, Miss., played NCAA Division I before joining Lakehead, and is the Thunderwolves’ leading scorer this season.

Yanchus (senior guard from Guelph) and Glanville (sophomore guard from Toronto) have been an effective one-two punch for the Gryphons, both averaging roughly 17 points per game during the regular season.

Gilmore, a senior forward from Etobicoke, Ont., has been remarkably consistent this season, averaging 16.4 points and eight rebounds per game.

McCullough is a crafty fifth-year guard who moves well with and without the ball. Good spot-up shooter who can create his own shot off the dribble. He averaged 15.4 points and 3.3 assists during the regular season.