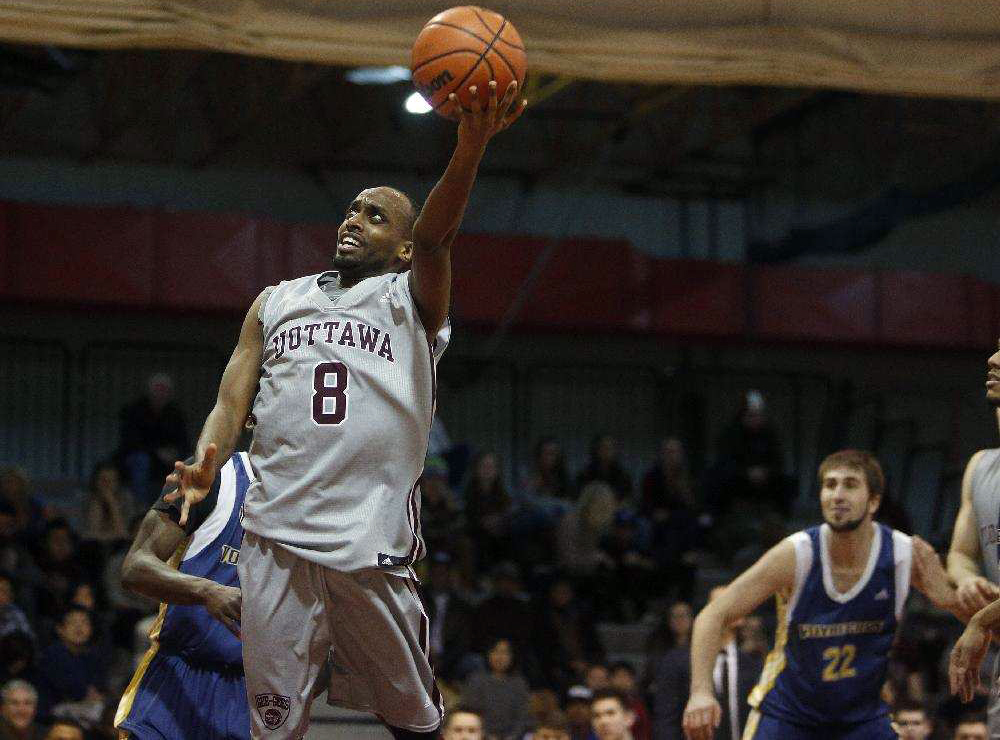 Toronto, Ont. – (BasketballBuzz) – Junior guard Johnny Berhanemeskel drilled a mid-range jumper with .7 seconds left on the clock to give the No. 2 ranked Ottawa Gee-Gees an improbable 78-77 victory over No. 1 ranked Carleton Ravens to win the 2014 OUA Championship and help snap a 20-game losing streak that dates back to Feb 17, 2007, against their cross-town rivals.

With the Ravens leading 77-76 after a crucial made basket by Tyson Hinz with 6.7 seconds remaining, Ottawa Gee-Gees head coach James Derouin called a timeout to calm his troops and draw-up a play, his last words before his team left the huddle, – “Johnny, I wanted you to dribble here with your left and find the pull-up to win the game.” calmly, but sternly reenforcing confidence into his team who so often have come up short against Carleton.

Not only did he his team execute the play to perfection, his star player delivered, doing exactly what his head coached had asked of him.

Berhanemeskel finished with a game-high 30 points and added four rebounds and four assists to give the Gee-Gees their first OUA Championship since 1993-1994 and his first ever career win against the Carleton Ravens. Terry Thomas opened-up the game with a three-pointer and finished with 17 points and 9 rebounds while Gabriel Dube-Gonther also reached double-figures with 12 points and five rebounds.

The Gee-Gees started off strong and controlled the opening quarter grabbing their largest lead (7) of the game at 24-17 before Carleton closed out the quarter with a three-point basket by Victor Raso to trim the lead to 24-22 after the opening ten minutes. The two familiar foes traded baskets in the second quarter but it was the Ravens who took a slim 40-35 lead into the locker room thanks to a Clinton Springer-Williams bucket as the horn sounded.

Carleton behind senior forward Tyson Hinz opened up the third quarter on 5-0 and to extend the Ravens lead to a game-high 10 points as the Gee-Gees trailed 45-35. Ottawa responded with their own 11-1 run to tie the game 46-46 with 5:42 left in the period as Bernasmeskel and Terry Thomas found their stroke but Carleton found a way to go into the fourth-quarter leading 62-56.

Three-time OUA player-of-the-year Philip Scrubb struggled for most of the night but nailed a deep three-pointer with 3:39 to put Carleton ahead by double-digits at 75-65 left in the game and it seems like that Gee-Gees were head to their 21 straight loss at the hands of the Dave Smart and Ravens.

Instead of hanging their heads the Gee-Gees responded with their own 11-1 run ( seven by Berhanemeskel) to take a 76-75 lead with just 22 seconds left on the clock.

Carleton Ravens’ Tyson Hinz powered the Ravens all-night and finished with a 25-point, 10-rebound double in his last Wilson Cup, Thomas Scrubb added 21 points and four rebounds and his brother Phillip Scrubb managed 13 points despite only shooting 3-of-12 for the game. Lost ends Carleton’s 55-game winning streak against Canadian teams, their previous loss to CIS teams came against the Windsor Lancers on November 9th, 2012.

Both teams will advance to the 2014 CIS Final 8 National championship in Ottawa, where the Gee-Gees are guaranteed one of the two top seeds after becoming the only Canadian team to knock off the defending champions so far this season. The Gee-Gees improve their overall record to 36-4 with their only losses coming at the hands of Syracuse, Wisconsin and the Carleton (2x). The Ravens record drops to 34-3 with losses coming to Syracuse, Cincinnati and now their rivals Ottawa.