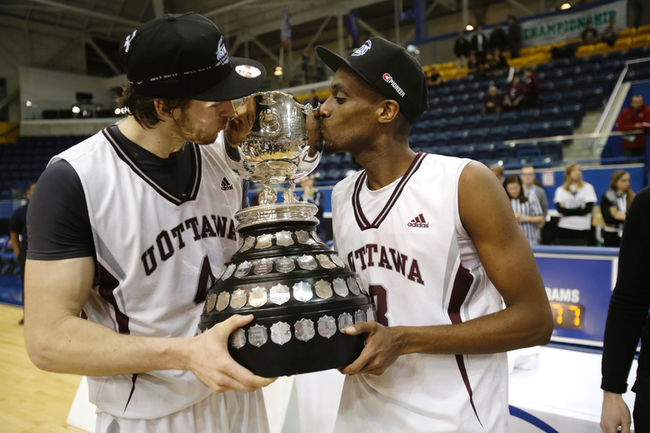 Ottawa Gee-gees Awarded No. 1 Seed At 2014 CIS Final 8 For The First Time In School History

(Ottawa, ON) – (BasketballBuzz) – For the first in the programs history the Ottawa Gee-Gees have been awarded the No. 1 overall seed at the CIS Men’s Final 8 tournament. A night after shocking the No. 1 Carleton Ravens to win the 2014 OUA conference championship the Gee-Gees convinced the seeding committee that they deserved the No. 1 seed. The nine-time champions and three-time defending champs Carleton Ravens drop to number two after suffering their only loss of the season. The Ravens were also given the no. 2 seed back in 2011. As expected the Canada West champions Alberta Golden Bears secured the third spot and rounding out the top four seeds is the Victoria Vikes who finished second in the Canada West.

The McGill Redmen get the fifth spot thanks to their back-back Quebec/RSEQ championship and the St. Mary’s Huskies take the six spot after winning out the Atlantic conference. Rounding out the final two seeds are the McMaster Marauders who earned a bronze medal after finishing third at the 2014 Wilson Cup and the Saskatchewan Huskies who were awarded the at-large wildcard by also winning bronze at the Canada West Final four tournament.
Overall the eight best teams will be in Ottawa in what is expected to be another great National Championship.