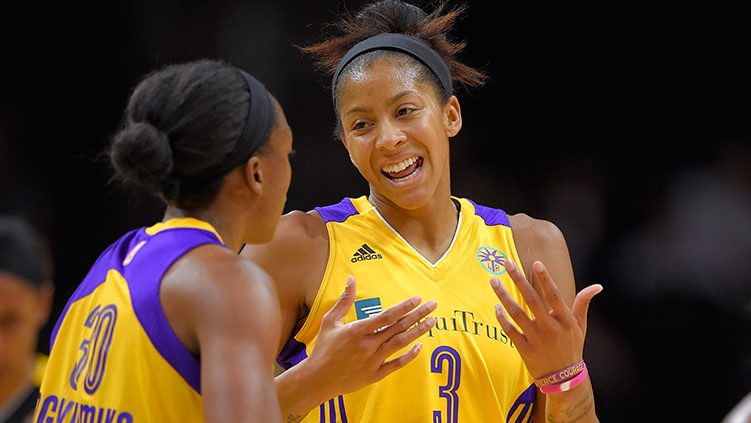 Watch this for work!

In 20 years of Los Angeles Sparks and the Womens National Basketball Association history nobody has had a start like this, as potential MVP Candace Parker and her L.A. ladies have dialled it up to 11.

Sparking a run for gold to the tune of 11-Zip it looks like purple is about to reign again in the City of Angels as the sister team to the Lakers show that Kobe may be gone but Los Angeles basketball isn’t. Just like the new Hollywood ‘Ghostbusters’ reboot don’t front on these formidable females.

Bleeding purple and gold like big brother in STAPLES the show isn’t over, even if the NBA season and who out of LeBron James Cavaliers and Steph Curry’s Warriors will claim champion comes to a deciding end by the end of tomorrow.

Times are a changing in Los Angeles. But as the post 24 Laker legacy and life rests on who will be the annoited, chosen one (arise sir D’Angelo, Jordan, Julius or even Kevin or Ben), we all know who the leader of the L.A. Sparks is and that’s Miss Parker. The candid Candace being as open and expressive on the floor as she is off it. The Michael Jordan of the Los Angeles Sparks and WNBA history Lisa Leslie has her jersey in the rafters along with the Magic and Worthy greats like Shaq, Wilt and Kareem, but her former teammate Candance is finally being the Kobe that follows in the sneaker steps of her mentor. She’s been great thus far. Catching dunks and records like Leslie. Also whilst moonlighting in the European leagues in the extended offseason to get more play than pay (you ever seen a man do that?) and further her court experience and education. But now it’s her time to dominate. Forget MVP…she’s after the real trophy.

Parker parted with 24 points, 11 rebounds and 4 assists as the Sparks dispatched and rose above the Phoenix Mercury 77-71 last night. Showing that this squad was primed for more than “just” a top ten clean sweep. So far they’ve swept the floor with everyone they’ve faced and most of these teams are no scrubs either. Showing no TLC to even the type of teams that look to explode on TNT by the nightly. On opening night they even beat the predicted West best. Storming Seattle and their legend Sue Bird and potential rookie and future of this franchise and association Breanna Stewart.

Stewie may be the future but Candace is right now. And right about time. It’s not all on her however as this team is deeper than an L.A. storm drain when it finally rains in Southern California. But this L.A. queen is not on her own for the throne. To say Carson is the essence of this team daily is more than a play on words to her first name. She deserves the credit. Where when it comes to hitting big from downtown L.A. just off Pico Boulevard, Kristi Toliver is just the spark that plugs and makes this electrifying team in the heart of L.A.’s neon skyline exactly that. And finally in the middle of it all like those three blocks of Hotel Figueroa is Nneka Ogwumike. It doesn’t get much bigger than that. One day they need to put pictures of these players on the towers like they have the Lakers.

Because in another two decades you’ll see more jerseys, banners and even bronze up in Los Angeles. These Sparks are about to ignite.