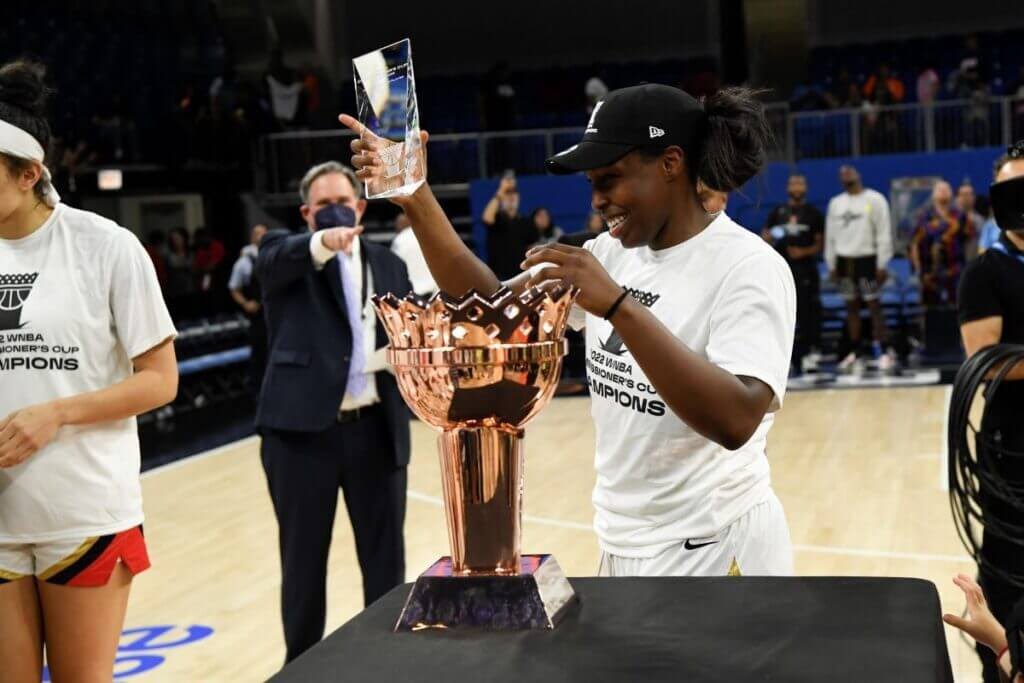 Ace high over sky in the 2022 wnbas commissioners cup

Jay-Z and the Notorious B.I.G. almost formed the supergroup of rap supergroups together with The Commission. They collaborated on many classics like each other’s ‘Brooklyn’s Finest’ (Shawn Carter) and ‘Love The Dough’ (Christopher Wallace), for the record. But sadly, the project ultimately didn’t happen.

The Commissioners Cup, on the other hand, is now a regular fixture in the WNBA and on Amazon Prime. Reminding us of a mid-season soccer tournament, it’s time for some action.

Can you kick it?

The W stands for “WOW” in all-caps when it comes to these women. And after Seattle stormed their way to another trophy last year, the second annual cup was that word to the definition.

If you thought Liz Cambage’s Hollywood divorce from the Los Angeles Sparks was the big WNBA headline of the day, then you were wrong. This was only for the fans and a perfect precursor to the possible WNBA Finals to come with Cambage’s old team the Las Vegas Aces engaged with last year’s champion Chicago Storm.

After an amazing All-star off the orange carpet in the Windy City last week, last night’s game against the one of sin was the real deal, in the very same building.

Put your hands together for nail-biters like this and just pray the NBA comes up with something similar. All from the league who was the first to give us the social statement jersey idea before the Wubble (we see you, Angel) and still makes those grand gestures on the floor today, to the letters BG.

Even though it took away Chicago’s home court advantage somewhat on an equal footing. How great did that decked out court look? Complete with its league’s logo adorned in the centre circle, as one legend and this year’s MVP favourite tipped off.

But you just know these Storm and Aces are more than Candace Parker and A’ja Wilson respectively, with all due respect. Especially in the closing contest here.

ASG MVP Kelsey Plum (24 points and 5 assists), for one, is possible the only player who could wrestle this year’s Most Valuable Player away from Wilson…and she’s her teammate.

Wilson may be working the middle, now it’s no longer clogged up with Cambage (despite the problems, we want to see Liz find her right solution) and too many big bodies. But Plum from deep looked like she was about to take the three-point crown from Chi-town’s record-breaker Allie Quigley in a hurry. Right from the first shot, to the next two from three.

That run had Vegas rolling to a 10-zip start. And wire-to-wire that would be it. All she wrote. 93-83 as the Aces held all the cards, clinching the Commissioners Cup. Starting and finishing by 10. Coach Becky Hammon winning her first piece of hardware in the W.

Yet, the actual compellingly contest was much more competitive than all that.

‘Gawd’ , Chelsea Gray made her point with 19, four rebounds and five assists. The commentator saying she was playing to bag that $5000 MVP cash prize, right before she hit another bucket. And he was right on the money, my Lord. Gray led the way as the cup’s Most Valuable Player. Duking it out with former Sparks teammate CP3, who set herself alight from downtown after starting cold.

The Aces of Vegas also hit the $500,000 prize pool winners jackpot (each player taking home 30K) and a preview to the prediction of the champs to come. Although it will take a lot to take that away from Chicago, who were giving up nothing in this game. That’s why they also left this contest with a cool ten thousand dollars.

The Sparks may have erased a 28-point deficit behind Parker’s 20 point, 14 rebound and four assist performance. But from the first possession three-ball, until right down to the horn, it was all on deck for the Aces. Thanks to Aj’a’s new double/double standard of 17 points and that many rebounds too.

Reigning Finals MVP Kahleah Copper with her signature drives, Emma Meesseman filling in for Quigley and partner Courtney Vandersloot from downtown, and their 18 points each weren’t enough. Not for ‘The Gray (Wo)man’ assassin and a prime-time game streamed as much as Netflix.

Subscribe to the W and throw it up like you were in the Wu, because this is business as usual for basketball this summer.

Just another day in the life of the Commissioners Cup.