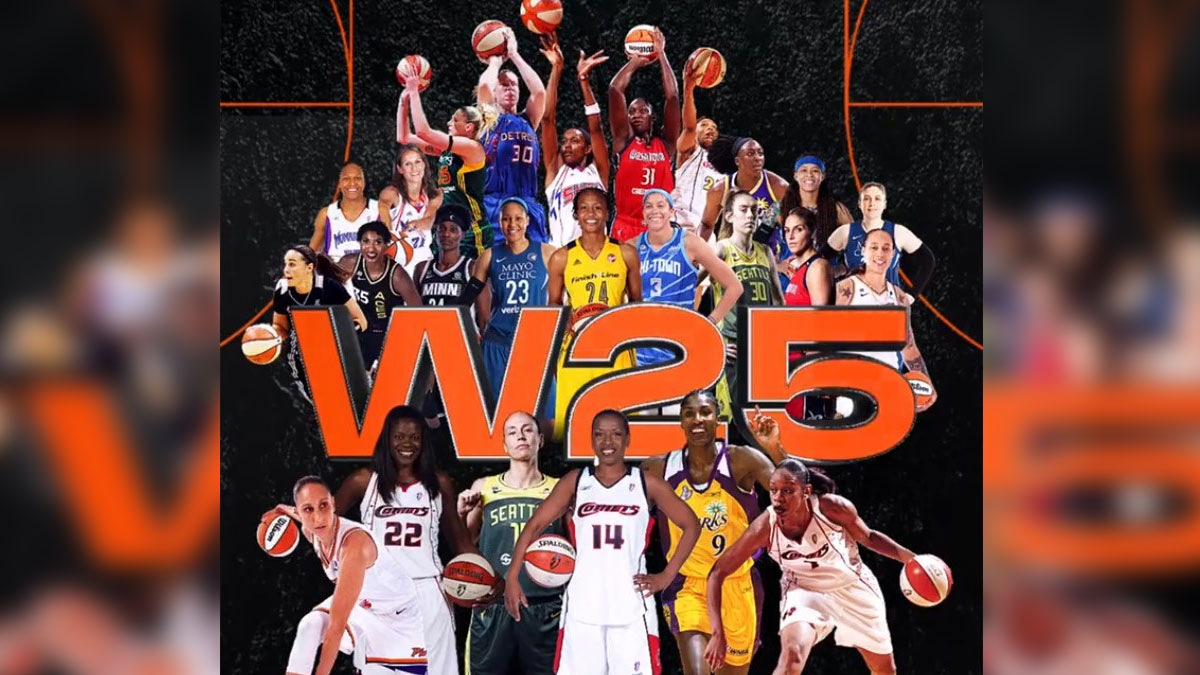 Like the NBA at 50 back in ’96, which was the same year as the W’s inception, the WNBA continues to celebrate its 25th anniversary with W25. A list of the top players to ever lace them up in the league.

But who is the greatest? That’s for you to decide with the W’s launched ‘Vote For The GOAT’ debate to determine who’s the best of the best.

Is it five-time Olympic Gold GOAT’s Sue Bird and Diana Taurasi, still putting up big numbers in the league at 40? Or perhaps one of their teammates.

The Seattle Storm’s Breanna Stewart, your multiple finals MVP. Or Phoenix’s Brittney Griner. Rising like Mercury and ripping the rim off.

How about legends still doing their thing like Tina Charles, Sylvia Fowles and the one and only Angel McCoughtry?

Big players like Elena Delle Donne. Just an absolute force with as much in the record books as she has in the trophy cabinet.

The All-star and Olympic snubbed Nneka Ogwumike (not here). A Hollywood star in Space Jam and a Los Angeles Spark one too in tinsletown. Her former teammate Candace Parker, coming home to Chicago.

Their teammate last year and recently retired Seimone Augustus now a coach on Derek Fisher’s Sparks teammate. Her former Minnesota Lynx teammate Maya Moore, back when this team were only built for championships. The social justice activist who means even more to this world than the game she still may come back to one day.

Or how about the ultimate Hollywood player? Catching the first ever dunk. Starring on ‘The Simpsons’. The one and only Lisa Leslie. ‘Don’t Let The Lipstick Fool You’ like her autobiography. Or how about the iconic lipstick of her former foe and then teammate Tina Thompson? A Sparks, Storm and Houston Comets (‘Save Our Comets’) star.

If you talk about Houston and don’t talk about the first league legend in Sheryl Swoops, then we have a problem. The Hall of Famer’s name even sounds like a classic court icon.

Must Read:
Odom Is Owed More Than This

Now how about newly minted Hall of Famer Tamika Catchings and all she overcome to get to where she is today?

And if you want to talk about coaches how about Becky Hammon who will lead one in the NBA one day? All about her talent alone and not to tick a box.

The great Cappie Pondexter gets the vote too, no cap. As does the unstoppable Lindsay Whalen, showing the WNBA’s depth chart in its history books is off the scale. Carving their own Rushmore reaching the mountaintop of equality and a collective bargaining agreement.

Did anyone miss the cut? Let us know your rank in the comments.

Now whose got next? Skylar Diggins-Smith? Sabrina Ionescu? Kelsey Plum leading the way to an Olympic 3×3 debut for Tokyo 2020? Canada’s own Kia Nurse?

Fate will decide, but you best believe the WNBA will turn 50 before you know it and those still writing off the women’s game then will need to grow up so fast.

The greatest expectations have been delivered and now this league is one you just can’t count out.