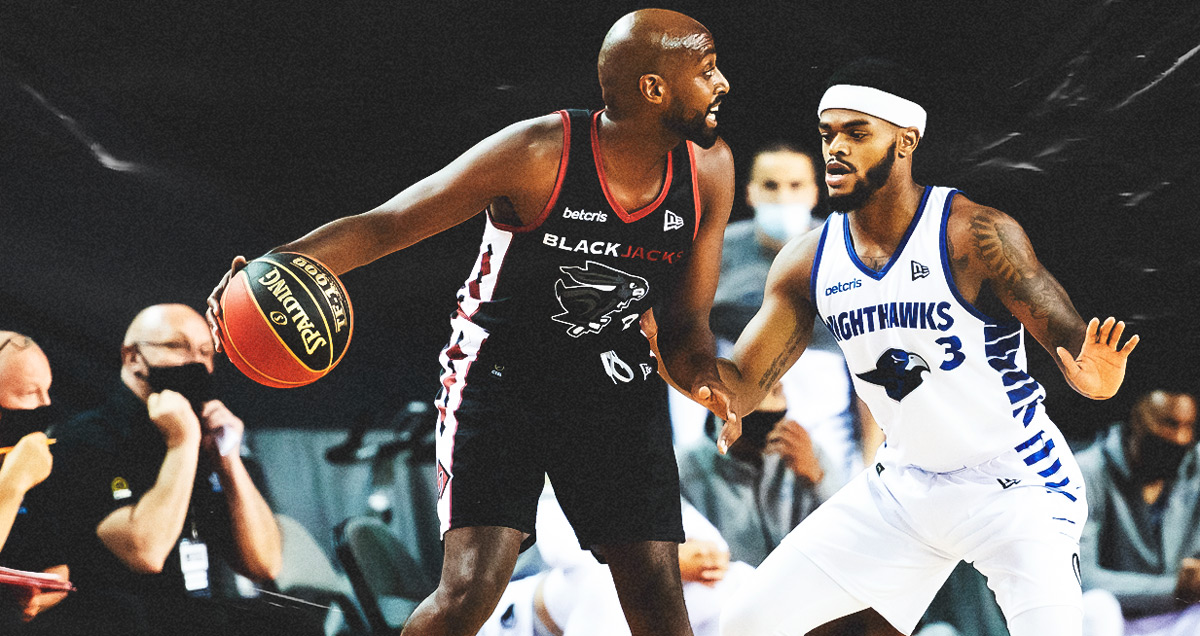 It didn’t take long for the Ottawa BlackJacks to get a taste of the physicality of professional basketball.

Playing in their first game in the Canadian Elite Basketball League (CEBL) the BlackJacks dropped a tough 89-63 opening game to the Guelph Nighthawks at the Meridian Centre in St. Catharines.

Johnny Berhanemeskel scored the franchise first basket with a deep two-pointer with the shot-clock winding down on the BlackJacks second possession to fast-track Ottawa to an early 6-0 run and a slight 16-12 edge after the first quarter.

The Nighthawks behind their duo of imported players stayed within striking distance and blew past the upstart BlackJacks in the second-half — breaking open a 38-38 half-time deadlock by limiting the nations capital team to just 33 points in the last 20 minutes of the second game of the experimental Elam format tournament.

Myrtle Beach, South Carolina native Tre’darius Mccallum 16 points, 5 rebounds, 3 blocks, 2 steals on 7-of-13 field goals paced four Guelph players in double-figures with an impressive outing. The 6-foot-7 forward and former G-league player with the Windy City Bulls dominated both ends of the floor in the victory.

Jonathan Arledge a 6-foot-9 forward from Washington, DC also caused havoc and finished with a double-double of 14 points and 10 rebounds despite connecting on only 3-of-15 field-goal attempts and 1-of-7 from three-pointers.

Fifteen-year Canadian basketball veteran Olu Famutimi (Toronto, ON) added 13 points, 4 rebounds and Jamal Reynolds (Pickering, ON) played an excellent game with 13 points, 3 rebounds and 2 assists, shooting a perfect 6-for-6 from the floor to help earn head coach Charles Kissi his first win of the new season.

The Nighthawks’ also got strong contributions from starting point-guard Kimbal Mackenzie (Oakville, ON) who added 9 points, 4 assists and 2 rebounds. Playing in his first professional game, former Ryerson Rams’ guard Myles Charvis (Mississauga, ON) controlled the tempo and ran the offense effectively, adding 9 points and a game-high 9 assists and 3 rebounds.

BlackJacks’ first-year head coach Osvaldo Jeanty got strong efforts from Thomas Scrubb (Richmond, BC) with a game-high 18 points and 8 rebounds in 30 minutes. Shaquille Keith (Toronto, ON) provided the offensive spark off the bench with 17 points, 5 rebounds and 3 assists. Philip Scrubb (Richmond, BC) also reached double-digits with 12 points, 6 assists and 5 rebounds.

Ottawa was also limited to just 12 fast break points compared to Guelph’s 21 transition buckets and connected on just 6-of-17 (35%) three-pointers.

Both teams return to action on Monday, July 27th, The BlackJacks will take on the Edmonton Stingers and 2019 CEBL MVP Xavier Moon at 7:30 PM. The Nighthawks look to stay unbeaten against the Hamilton Honey Badgers in the earlier game.