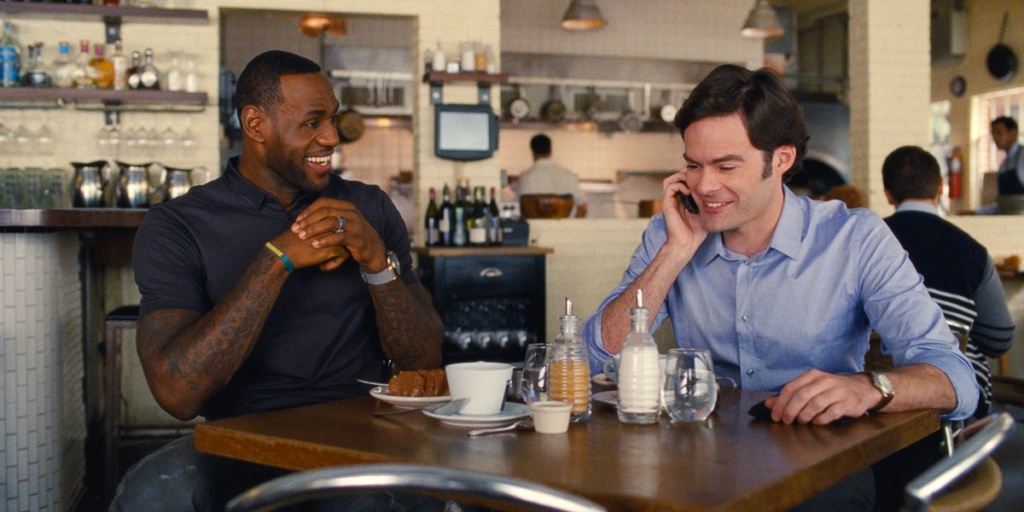 LeBron James’ Movie Debut Anything But A ‘Trainwreck’

By Hollywood reporting royal decree, Amy Schumer is the undisputed Queen Of Comedy! So does that make LeBron the King?

Of course it does!

The Cleveland Cavalier wine and gold James made his silver screen debut this week with the Amy Schumer and Bill Hader hit comedy ‘Trainwreck’. The reviews are in…and they’re rave and not just for the brilliant Schumer and Hader, finally finding their leading moment in an against conventions rom-com, but ‘Bron too who defies all the above to send up himself in such a way that the critics can only love.

Playing himself in more ways than one, LeBron James’ spoof of himself, a client under Bill Hader’s agent going all ‘Jerry Maguire’ is anything but a sports superstar screaming for the money to be shown. This film also features new Miami Heat star Amar’e Stoudemire in a hilarious cameo alongside the former South Beach talents of James. Nothing like comedian Chris Rock joking that in ‘Hustle & Flow’ rapper Ludacris “played himself”. Like the ‘Fast & Furious’ actor in Ashton Kutcher’s ‘No Strings Attached’, LeBron plays the best friend role perfectly, Esquire magazine calling his entrance ‘Kramer-esque’.

With a ‘Seinfeld’ funny bone at 30 the King may have found a new calling. One that sees him ruling the cinema like he does the court. Whether the floor is sticky with sneakers or popcorn, James looks to make his mark. And it can’t come at a better time for LeBron. After losing out to the Golden State Warriors for the NBA Championship this season gone after carrying a Kyrie and Kevin depleted Cleveland team like a true Cavalier, James now shows he can shine in a supporting role in a different game. This must be a dream come true for the all-time superstar who has admitted to still being woke up with nightmares of losing the NBA Finals.

If that sounds funny to some critics then the jokes on them now as the Cavalier star shows he has the comedy chops as well as the basketball brains. This was evident in those early days multi-personality Nike commercials, where the King went all grey and Old James before his Uncle Drew teammate took everyone to school. And who could forget ‘The Decision’ commercial? Where LeBron took his talents to the NFL Cleveland Browns and probably inspired a new generation of Gridiron goal dunkers.

Must Read:
No Love For Carmelo And LeBron

Now basketball’s biggest commercial king since Jordan is looking at more movies. And Like Mike the rumours are looking at ‘Space Jam 2’, which would be a joy to see. A whole lot better than ‘Kazaam 2’ anyway! Whether LeBron forms a big-three with Bugs and Taz remains to be seen on screen, but after wrecking the box office, hopping a train with Schumer and Hader it’s clear that’s not all folks!