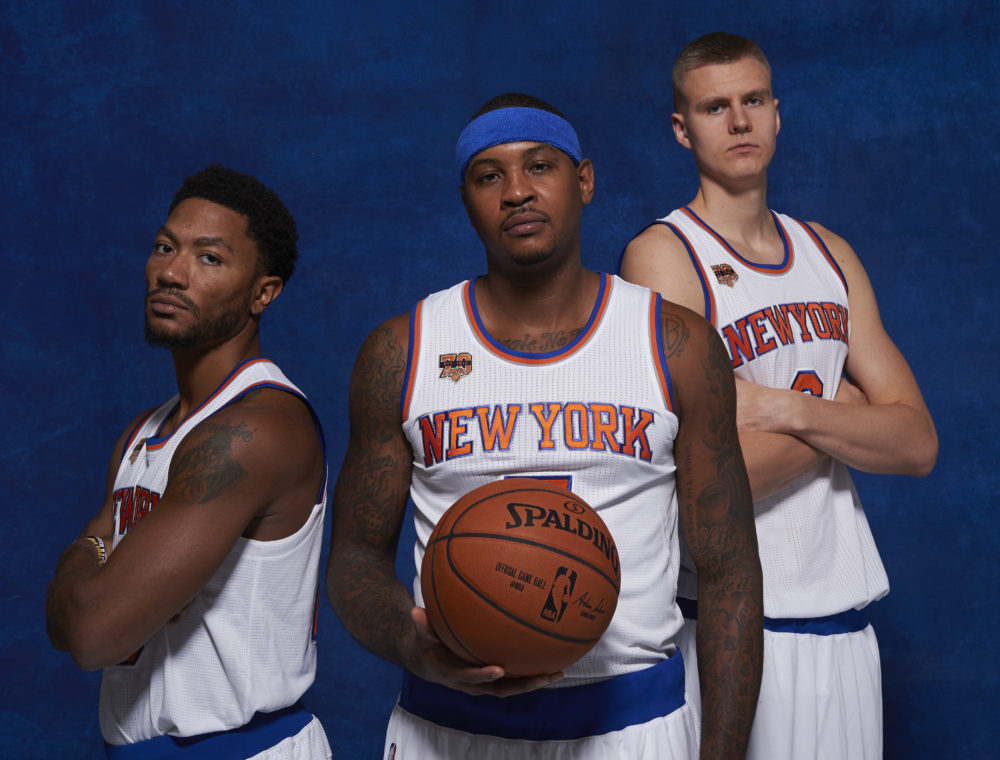 The 6 turned the rest of the NBA upside down so much they are no longer a 9 seed now. Drake’s knights are all stars now, like dynamic duo DeMar DeRozan and Kyle Lowrey. And adding the likes of Jared Sullinger to a pine fresh bench that features Canadian homecomer Corey Joseph is going to take them even further out the cabin in the woods.

A few years and millions ago the Brooklyn Nets biggest problem was who out of Deron Williams, Joe Johnson, Paul Pierce and Kevin Garnett was going to take the ball. Now underrated big-man Brook Lopez needs some help in his B.K. fight for N.Y. And his twin just escaped New York, going from the Big Apple to the Windy City. At least the as enigmatic as his hair Jeremy Lin is back in the city that gave him his 15 minutes of Linsanity. But did you see that lay-up he blew this week Shaq’ting a fool? Time for the Nets to go figure before they become just another gif.

The real home of New York basketball outside of the Rucker isn’t looking as rotten with the new New York Knicks. The ‘bockers have a real spring in their step with the Derrick Rose that grew from Chicago concrete…and he brought his Bull brother Noah with him in free agency too. Add Brandon Jenning and Courtney Lee, Porzingis becoming a legit star and Carmelo Anthony having as big a year on the floor as all the awareness he is socially spreading off it then M.S.G. looks to get Mecca mega. Then they’ll be yapping about them even more in ‘Luke Cage’ barbershops. And just maybe Phil Jackson will be able to get himself a free haircut.

Philly can’t catch a break right now. Unless it’s to number one draft pick Ben Simmons’ foot. Their accension from the lotto to the big ticket is like Rocky running up those steps with a dislocated hip. The creed of their city Allen Iverson answered the halls call this Summer. But their are questions shrouding their future famers. We all know the rookie season big-man Jahil Okafor had and Joel Embiid may be back but how much room is there in Nerlens Noel’s frontcourt? Put them all up there and you have one imposing frontline, especially when the next LeBron comes back from injury to guard everything else. That could be scary, but right now the Sixers are having a nightmare.

Beantown just got a shot of coffee like Boston Common this Summer. He may not be Bill Russell, but big-man Al Horford is the Celtics type of player through and through. Even if the professional veteran has spent the rest of his career with the Atlanta Hawks. He is the centrepiece of a talent and underrated roster that could bring the C’s back to the champagne and chips. All lead by Point Guard Isiah Thomas. One of the quickest, savviest floor genreals since…well Isiah Thomas.

LeBron James and all the Kings men erased a half century city drought, all the doubt and a never done before 3-1 defecit in the NBA Finals against the 73 win game best Golden Stade Warriors for the realest comeback in ‘Brons Ohio homecoming. One Kevin Durant later and everyone is trying to take all this from The Land. But there’s real Cavaliers here. And Cleveland have added the type of Richard Jefferson vets that are animals when it comes to experience. From James’ former Miami Heat rock Chris Anderson, flying above the rim like a Birdman, to the legacy lineage of smooth forward Mike Dunleavy Jr. But whose going to sign J.R.? Lets not forget the Love like Kevin. The King can take his throne again this year because there’s a name here just as scary as Kevin. It’s Kyrie.

And you say Chi-cities Bulls looked ready for a stampede last year. Now Chicago’s recharged and really seeing red. Sure in the wind of change losing hero Derrick Rose, heart Joakim Noah and Pau Gasol on hallmark form was tough, but keeping the services of Jimmy Butler was the number one priority. And they did it! But look at the big-three they’ve got in return. These guards may not be literally big, but they’ll run this small ball league into the ground. On paper Rajon Rondo is the leagues best prototype Point Guard, but buyer beware this former Celtic had been on almost as many teams since as players he’s passed too. Still homegrown Dwyane Wade’s return to his true city is the sweetest story for Chicago…even if it is weird not seeing him in Miami’s own classic red, white and black. But alas when it comes to the legendary Bulls future, rookie Denzel Valentine may show them the most love.

Last year Paul George returned from the previous ones season crippling injury to show he was still the player he always was…if not better. This year he plans to go one more saying he has his sights set on league MVP. The Oympic Gold Medalists team look to more however. As the Pacers in their 50th year in Indiana have quickly and quietly assembled one of the best and most underrated rosters in the association after losing the likes of George Hill, Roy Hibbert, David West and Lance Stephenson/Danny Granger. Don’t believe us? Aaron Brooks, Monta Ellis, Al Jefferson, C.J. Miles, Rodney Stuckey, Jeff Teague, Myles Turner, Thaddeus Young and Glenn Robinson’s kid tell you differently. Larry Bird’s men look to run the picket fence with a lot of dark horse power. Keep Pace!

Andre Drummond, Reggie Jackson and Tobias Harris are the big-three and they may be enough to motor the Pistons to the point where everones screaning “DEE-TROIT BASKET-BALL” again. Their one of the most overlooked triple threats in a league of Holy Trinity’s. But you can’t overlook what’s overtaking you. Motown and Motor City are not over. We told you to keep pace.

The Bucks do not stop with the ban of O.J. Mayo. They begin with the alphabet of Giannis Antelokounmpo. The M.C.W. The making of Thon Maker. The return of Jabari Parker. And even Michael Beasley. The big contract for Cav champ Matthew Delladova. Or the big-man himself Greg Monroe, as complimentary to this team as Clarence Cleamons was on the E Street Sax. Jason Kidd’s kids where born to run and with veteran six Jason Terry coming off the bench like a runway the Bucks could really jet.

Must Read:
Quebec Basketball sweeps 2019 Canadian U15 & U17 National Championships

If it aint broke, don’t try to cast a spell to fix it. The Washington Wizards house of guards John Wall and Bradley Beal and their Lincoln towering centre Marcin Gortat have been around for as long as Gandalf, but they’re still so Griffindor young. But for this team to be really capital like D.C. perhaps it’s time to initital a few more contracts. The Wiz will always be a quick draw but it’s time for someone new to come to town. But please, anybody but Trump.

Once, twice, three times a loser. The big-three is done. First the King James exiled himself back home to the throne and now even Heat lifer Dwyane Wade has returned to his roots in the Rose concrete broken Chicago. But the real tragedy is Miami giving up on Chris Bosh. Lets hope and pray this is not the end. Now the most experienced South Beach talent is Gorjan Drajic. But Hassan Whiteside and Justice Winslow are the future. They might be able to count on a few more lottery picks for company soon. Don’t count them out though. The Heat is still on…but the flame is flickering.

The Hawks have lost a couple of wingmen. But long time franchise faces Jeff Teague and Al Horford will always be welcome in Atlanta. The players that are playing now include Kent Bazemore, Jarret Jack and Tim Hardaway Jr. And Hawkeye Kyle Korver is still the arrow man. But it’s Dwight Howard’s 100 watt Magic smile that is the new face of the A. Some in Orlando, Los Angeles and Houston may have their doubts, but wearing Kobe Bryant’s old number in memory of the family he could have had Dwight’s return to his Georgia home has so much more sweet meaning to it. And a bruising big frontcourt wih Paul Millsap will hit back at all those taking shots until the ATL reaches the knockout stages.

There’s a lot of buzz surrounding Hornet basketball right now. But there always will be when this North Carolinan team is owned by the greaest to ever do it, Michael Jordan. Sure they may not have the All-Star game anymore…and rightfully so, but the franchise still has those type of players. The Lance Stephenson experiment didn’t work (again). Now it’s time for Kemba Walker, Michael Kidd-Gilchrist, Nicholas Batum and Frank Kaminsky to be all they can be. Then the honeycomb will be as sweet as those Kobe teal what could have been draft Nike’s. But don’t worry…Charlotte is good.

How about a Magic trick? How about the Penny pinstripe throwbacks making something out of a roster that features thunderous free agent Serge Ibaka, real dunk champ Aaron Gordon, sophomore stud Elfrid Payton and veteran journeyman star gunner Jeff Green? Otherwise Orlando will only be known for Disney and what could have been with Supermen Shaq and Dwight Howard…and don’t get us started on them losing Tobias Harris. Now you see them. Now you don’t!

In this article:Eastern Conference, Featured, NBA