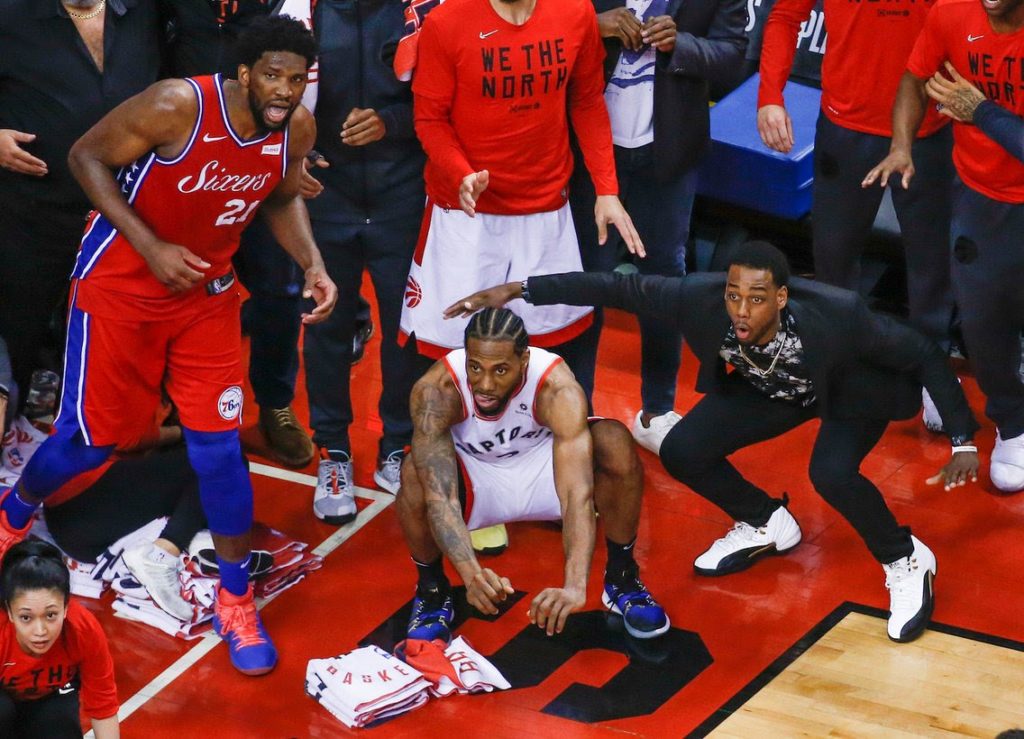 As the Klaw was falling out of bounds as the buzzer blared and blazed red, the Spalding hit the rim and bounced back up. Kawhi Leonard, crouched at the baseline like Tiger Woods mastering Augusta, with his M.J. clutch tongue out and that thousand yard stare for a picture that was about to say that many words just watched. The ball hit the rim again as super sub Jordan Lloyd in street clothes with his arm around Kawhi excitedly watched in anticipation at all this air time that seemed to last longer than Winters in The Six. It looked like Summer in this city would drop before this simmering ball. It hit the rim again. To Leonard’s left Philly Sixer, Joel Embiid, almost smiling watched all this process with Game 7 and the Eastern Conference semi-finalists and who will play the Bucks in the final on the line like this ball in the seconds after time expired. It hit the rim again.

And again and again…

…and then it dropped.

Sunday was such a fun day for sports fans. In the same 24 hours where the Premiership came down to the last game as the valiant reds of Liverpool lost the race to the champion Manchester City by two points (sound familiar?) in the afternoon, the NBA had one hell of a double header to close out God’s day which is usually a lazy one with a blessed gift from the hoop heavens.

Two game sevens in one night? This must be fantasy Basketball.

But it all came down to this.

First up the Pepsi Center in Nevada cracked open the last game between the two wild cards come good of the host Denver Nuggets looking to stone-cut their way to success and the visiting Portland looking to blaze a trail out of Rip City, following their first round downpour from way downtown against the OKC Thunder. But in the first half it looked like the Dame Time watch of Lillard had stopped as this team down by as many as 17 looked as cold as that teenage age. It looked like The Joker Jokic with 29 and 13 and his golden Nuggets held all the cards.

Must Read:
Will LaMarcus Aldridge Spur On A Post Tim Duncan San Antonio?

That was until the second half turned into C.J. time.

That’s when the other half of the best backcourt in the league (sorry Bradley Beal and the Washington Wizards. Get well soon John Wall. Show us what you still got next season) came alive in the crunch time like snap, crackle and pop. CJ McCollum definitely finished his breakfast on Sunday morning as he had an extra bowl this afternoon and finished with 37 points. Stopping on a dime and turning into a mid-range killer as his previously burnt our Blazers got that fire back and a 100-96 close victory in a to the wire and free throw line conclusion like chess tense. All checked for their first trip to the Wild West finals since the year 2000. The time Bonzi and the boys met Shaq and Kobe and that infamous, iconic alley-oop with arms up and mouths open.

But this time they will meet another dynasty champion…the Golden State Warriors.

Kevin Durant. Klay Thompson. Draymond Green and Steph Curry with the shot. One more before the Silicon Valley of San Francisco.

“Kick them off he court again boy”!

But that wasn’t the only thriller this night as we in the north were treated to more hardwood playoff views just north of six. If you were a betting man you couldn’t call it between these two games and teams. That’s why we have seven games. Or as the Nuggets coach Michael Malone screaming and staring in the eyes of elimination and his players said it best during his last timeout, “there’s no Game 8”! Whatever the outcome of this one was going to take all the Oxygen out the ScotiaBank former Air Canada Center.

In the end after two tales of epic four quarters there was no time for overtimes. As this 92-90 game came down to the closing clutch and two free agents to be who didn’t know whether they would be playing on Wednesday in Milwaukee, or fishing back home. Let alone what jerseys they’d be wearing next season, come Summer. Jimmy Butler thought he had it with a hard fought lay-up as did a jumping and clapping Embiid in premature celebration. But then the usual calm and composed assassin of Kawhi Leonard with 41 looked to claw away at all that, as he emphatically ran to the corner of downtown like your first night out of youth and launched what would have been a Hail Mary prayer if you didn’t believe just how brilliant this guy is. Craning the gooseneck and then watched as another Toronto Star took that renaissance painting iconic photo.

And judging from the usual calm and composed Kawhi’s screaming reaction as what looked like the whole of Toronto hug mobbed him you can guess the outcome with an electric Jurassic Park as wild as real raptors alive outside that no perimeter fence could contain. Forget the next few months and whether he will trade this cold front and touch of frost for a sunny day in L.A., right now Leonard has a real chance of making hoops history as Canada could well become the first franchise outside of the United States to become National Basketball Association champions. And those ready for that laughing GIF in response that was a lifetime ago. Look at his face last night. Whose laughing now? They said he’d never leave San Antonio and looked what happened there. The opposite could here.

But with both games done and dusted, taking it to the brackets the most impressive thing on both fronts yesterday was the professionalism. Whether it be the respect and heart emoji exchange between the Denver Nuggets and Portland Trailblazers on Twitter. Or Marc Gasol consoling and embracing an emotional and tearful Joel Embiid (absolutely heartbreaking and healing to watch) postgame in Toronto and undoubtedly telling him how much of a warrior he is. In a time where fans troll, reduce and erase superstars and teams into memes as soon as they are eliminated (James Harden? The MVP? Really? Like we could do better against the Dubs…or anyone) it’s real and refreshing.

And that is why we play…and watch.