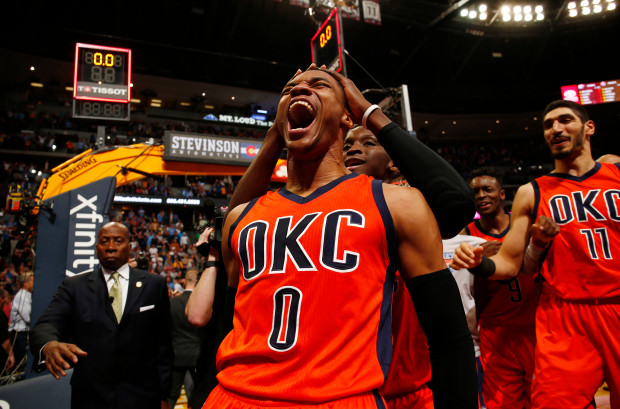 Why not make history?

It’s a number retired by the whole Major League Baseball association across the board in honor of the first African-American to play and dominate the league in the legendary Jackie Robinson. It’s the title of a legacy making biopic movie based on his life and career by Marvel’s ‘Black Panther’ and ‘Get On Up’s’ James Brown, Chadwick Boseman. In basketball terms it’s the number of the Lakers ‘Big Game’ James, Showtime legend raised to the rafters with all those banners from the 80’s.

And in the NBA last night it made Oklahoma City Thunder dynamite dynamo Russell Westbrook worthy of passing Oscar Robertson with the all-time number of triple-doubles in the regular season with 42.

Speaking of big game James’. The Cavalier King LeBron became the first rookie to record a triple-double on his opening night season debut since Oscar Robertson, way back when for the wine and gold. Before Miami and both decisions. But as the mighty 0 went from zero to hero and passed the Big O he also went one further and stilted the great 100 point numbers man Wilt Chamberlain aswell. Notching his 10th assist and passing the late Laker legend for 4th on the all-time triple-double record list with 79. And we know he can make it to number one before his career comes to a close.

Here’s to his where amazing happens nightly 50 points, 16 rebounds and 10 assists. All astonishingly capped off by a buzzer beating three pointer that won the game for OKC 106-105 over Denver.

D’Angelo Russell’s epic and emotional clock beater from downtown for his Los Angeles Lakers against the Minnesota Timberwolves on the day of his grandmothers passing was real special and bittersweet too, as he refused to tap the ice in his veins as per and like his teammates as he ran into the stands and fell exhaustedly and emotionally into his brothers arms as he made the shot for his nan. But this was something special too.

The record was history book making legendary…the win was even better.

Against all the odds Russ did it. In a season that began with former friend and teammate Kevin Durant making throne like decisions to join Steph Curry and his band of Warriors out in Cleveland leaving ‘brook with not much else. With all due respect to new big three finishing Victor Oladipo and Steven Adams. But now Russell is the West. And if you don’t think the Thunder striking, lightning quick guard has weathered the storm to reign as one of the best players in the league then how do you like him now? He’s just gone down as one of the all-time greats in a season where he’s been on pace to actually average a triple-double as he looks like he’s about to share co-MVP honors with former OK teammate and fellow triple-double Point Guard machine, Houston Rocket James Harden (who in other news notched his 21st trip-dub of the season in a crowning win against the Kings).

But last night he might just have shaved a few of the beards votes.

Like his Jordan Brand Nike says ‘Big Games Make Big Names’ and last night for one of the G.O.A.T’s it didn’t get any bigger than busting a record that has stood since the first years of the sixties. Over half a century later and everyone who loves this game left screaming like Elvis fans with a Beatle-mania sense of fainting euphoria. Westbrook played Ed Sullivan. And this was his ticker tape, confetti show. Whilst all the haters acted as upset as children letting go of their amusement park balloons. But like the Celtics upsetting the Lakers on the Forum floor 60 years ago, let ’em fall, let ’em fall. Even the King had to recognise the brodie.

Watching from his Golden State, even Warrior Kevin Durant has got to love it.