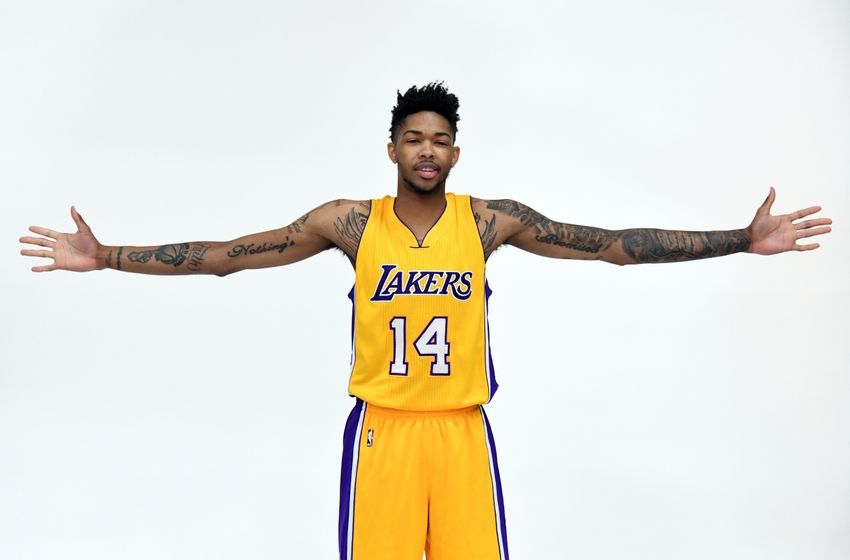 Brandon Ingram Is Beginning To Ingrain His Laker Legacy

He probably won’t win Rookie Of The Year. He might not even make the playoffs this postseason. But the number two pick in this years NBA Draft, Brandon Ingram isn’t just the next franchise face of the storied Los Angeles Lakers, he’s the next superstar in this league.

In the post-Kevin Durant generation this kid is the closest thing to the Golden State Warriors new superstar figuratively and slim pick, pound for pound literally. With his own Steph Curry, Klay Thompson and Draymond Green clones surrounding him in the coast of California in teammate brodies D’Angelo Russell, Jordan Clarkson and Julius Randle.

Sure these new Luke Walton Lakers are Dub-Lite. We’ve talked about this at a length greater than B.I.’s wingspan (see above…and below). But they are really the gold future of more than just the Pacific, despite the purple bruises that come with losing. Even Kobe’s finally admitting it. In the A.M (After Mamba era), the Lakers raw but refreshing unit are really growing up. Just look at Larry Nance Jr’s rise (and rise). It doesn’t just stop there. Ask Zubac. But from D’Angelo Russell’s growth to elder statesmen of sorts Nick Young’s maturity. And Julius Randle’s strength and conditioning to Jordan Clarkson’s all over the floor running and scoring like a previously underrated purple and gold number 6, these Lakers are making quite the legacy right now.

It used to be that basket to basket Kobe had to do it all. But now these young Lakers have two of everything. Backcourt and frontcourt stars like the aforementioned. Dirty work, enforcing paint chippers like Tarik Black and Thomas Robinson. International points of skill unfairly splintered in Jose Calderon and Marcelo Huertas. And with the clutch artist formerly known as Swaggy P and Lou Williams, two potential Sixth Man of the Year candidates. And if all that doesn’t work they have a proven All-Star in Luol Deng to carry the scoring load (but he hasn’t had too). The perfect mentor for his fellow Duke Blue Devil rookie in purple.

Because once this Small Forward finds his way between P.G. D’Angelo Russell (who is now out for one to two weeks with a sprain. Time to no longer put B.I. to the back. Time to let him shine!) and P.F. Julius Randle, this Tiny Dog is going to be the one to lead these Lakers from rag to bone once this man is let off the leash. Ingram is just that inspired and ready to ingrave his name on more than the number 14 or his place in Lakers lore. There’s been some growing pains, but that goes with any rook (see Bryant; Kobe, Jazz; Utah), but this kid has got it. And the lithe cutter is really rounding into playing shape. From hitting practice, to doing all the little things and intangibles that those writing him off could never pen. And now from knocking down the open shot to making his own way, he’s getting more and more plays dry erased up for him. His Rick Fox/Andrew Bynum jersey number career high has been asked after three times…but soon he’ll answer that. And just like that dunk his potential is higher than all that. Above the rim and beyond.

Here’s looking at you kid!