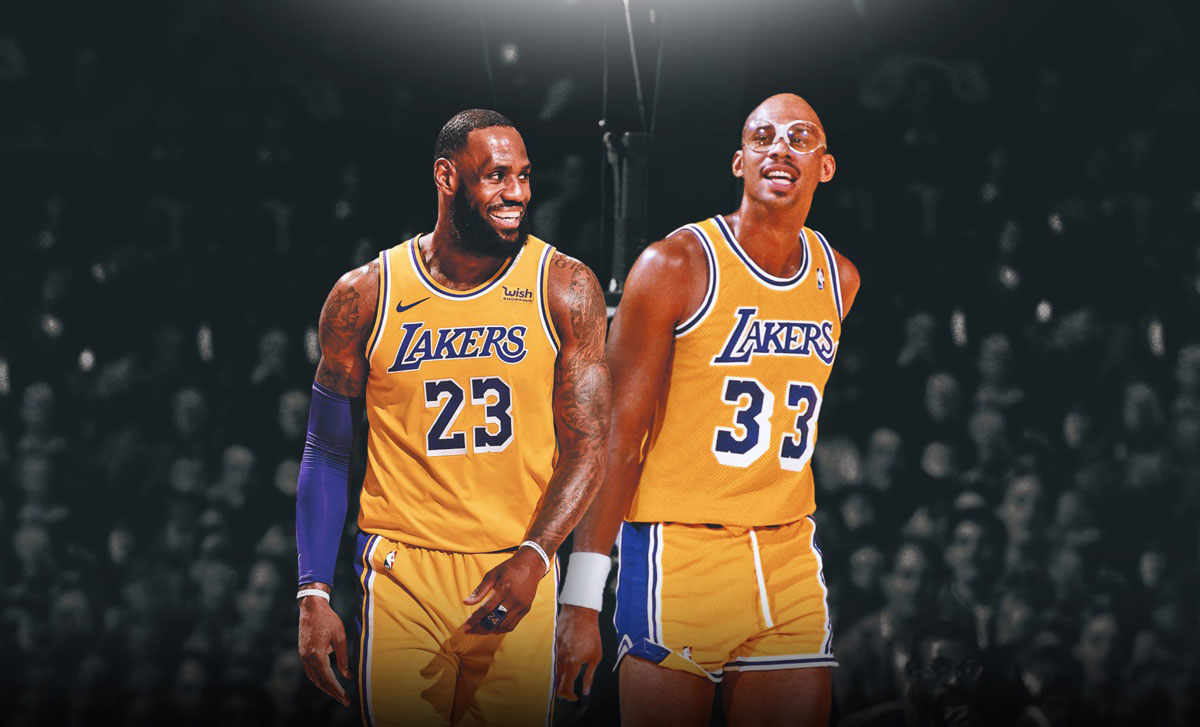 It seems every other game LeBron James is breaking another record, or moving some milestone.

But heading into next season and year 19 carrying the 6, the former two/three could move some serious numbers over the next 82 and change.

This could be the big one…and we aren’t just talking about the rings he could circle around with big Anthony Davis and his new superstar teammate Russell Westbrook.

Just a kid from Akron, LeBron James could follow his attempt to blockbuster eclipse the greatest Michael Jordan in ‘Space Jam-A New Legacy’, by passing Kareem Abdul-Jabbar in the scoring ranks.

Number 23 already has one over Jordan like Kobe wearing number 24. Just days before Bryant’s death, Kobe also congratulated his close friend on passing him in total points too.

It would be the Black Mamba’s last tweet before social media went crazy, like we all did in mourning days after.

If LBJ passes KAJ ‘Bron will cap off his career edging out number 33 as the all-time leading scorer in league history.

Even Skip Bayless couldn’t deny that. The pundit who clearly has a ‘Kings Disease’ like two Nas albums over the last couple of years.

Kareem himself overtook another Lakers giant in Wilt Chamberlain in 1984 and left the league with a total of 38,387 points. His record has almost stood for 40 years. Another milestone that the veteran superstar James is staring down during his formidable father time run.

Like the King in the clutch, this points total is one clock he can beat though.

James would need 36.9 points per game this season to pass Jabbar. Yeah…that’s not happening. LeBron may be the King, but he’s not A.I. in his prime. 18.4 over the next two sounds like a lay-up though. As ‘Bron will convert as automatic as he does when he rises over the rim for one of his trademark, touchdown like, running the floor dunks.

On time like a freight train with a collateral of record books as his cargo.

Sure, if number 6 really wants to be number one then this all depends on whether he stays healthy (touch hardwood). Also this season he has a lot of shooters and superstar teammates to share the ball with too. Even former rookie rival and number ten all-time NBA scorer Carmelo Anthony (finally).

All-time leaders move together for this most storied purple and gold franchise looking to do one more championship than the Celtics.

Abdul-Jabbar in retirement is a regular and wonderful writer for The Hollywood Reporter magazine and the British newspaper, The Guardian. His byline reads “recipient of the Presidential Medal of Freedom” and “NBA all-time leading scorer”. But for how long? When will the King take the throne from Kareem?

He’s all for it too.

“I’m excited to see it happen. I don’t see records as personal accomplishments, but more as human achievements. If one person can do something that’s never been done, that means we all have a shot at doing it,” says Cap.

“It’s a source of hope and inspiration. Roger Bannister broke the four-minute mile back in 1954. Since then, not only have 1,400 runners beaten that time, but the new record is 17 seconds less. We all win when a record is broken and if LeBron breaks mine, I will be right there to cheer him on.”

Will you be too?

3,020 points left and counting. Next up it’s time for the King to send himself past another former Laker. The Mailman, Karl Malone.