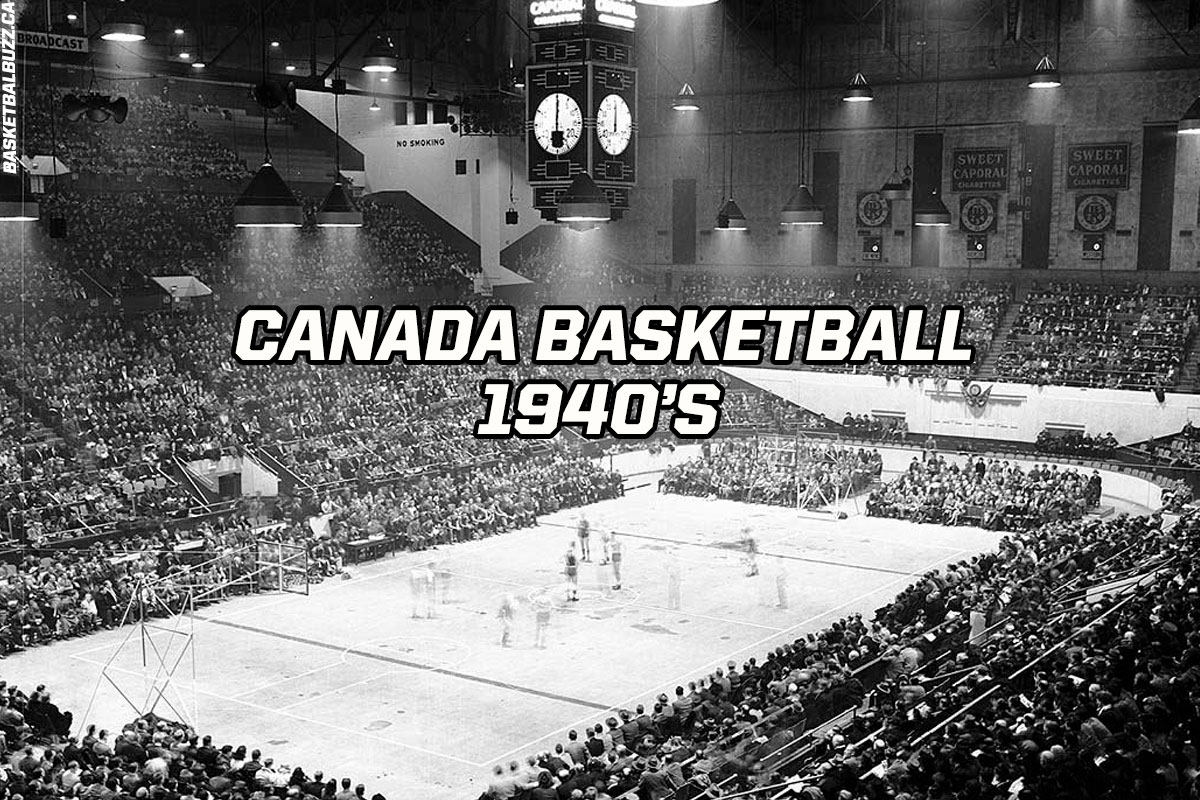 He may be best known though for the Toronto Daily Star advertisement that stated ““anyone taller than Nostrand 6-foot-10 will be admitted free.”

There were no free admissions that night.

Showing that the NBA was a marketing machine from the very start, the actual height of Nostrand was 6-foot-8 but 6-foot-10 looked better in print in order to attract Canadian fans.

Nostrand, Huskies star centre, would be traded a month later to the Cleveland Rebels.

The game’s first basket was scored by the Knicks’ Ossie Schectman, a Jewish-American born in Queens, New York, who has since been immortalized as the first player to score a point in the NBA.

“It was interesting playing before Canadians, “recalled Knicks captain Sonny Hertzberg.” The fans really didn’t understand the game at first. To them, a jump ball was like a face-off in hockey. But they started to catch on and seemed to like the action.”

Biasatti and Sovran would each appear in six games, scoring six and five points respectively.

Biasatti would later be drafted by the Boston Celtics in the 1947 BAA draft.

He continued to play semi-pro basketball (1948-1953) in the American Basketball League, highlighted in 1949 when he averaged 16 points per game (ppg) during 40 appearances for the New York Gothams.

Unlike the Celtics, a storied franchise that would go on to claim 17 NBA crowns to date, the Huskies closed shop after one year with a loss of over $100,000.

The home opener had attracted 7,200 fans but by seasons end they were drawing 500.

Huskies head coach Robert Rolfe said that the team would need at least three years to establish itself in Toronto, concluding: “Can you hold the fort that long?”

The NBA would have some Canadian flavour for the 1949-50 campaign as Montreal- born Ernie Vandeweghe would be drafted by the Knickerbockers in Round 3 following an All-American career at Colgate University.

He would play six years for the Knicks.

His son Kiki Vandeweghe, would later play 14 years in the NBA, finishing with 15,980 points (116th overall in career points) and a impressive 19.7 points per game average (ppg).

He also played for Island Air Force and No. 4 Saskatoon R.C.A.F. Cranes during the Second World War

Andrews then suited up for the Vancouver Hornets in the Pacific Coast Professional Basketball League (PCPBL 1946-48).

The team was a high-scoring one as they set a PCPBL record for most points in a game during the 1947-48 season, dropping 97 against Astoria Royal Chinooks on December 27, 1947.

In 1946-47 Andrews was one of two Canadians, along with Hornets ‘ teammate Baker, to play in the World Professional Basketball Tournament (WPBT) with the Portland Indians.

The Indians lost their only game played 62-48 to the Sheboygan Redskins.

Baker, who was voted Canada’s top basketball player of the first half of the 20th century in a Canadian Press poll in December 1950, turned professional in 1946 with the Chicago Stags of the BAA.

He signed what he said was a $4,800 deal to play in Chicago after ignoring an invitation to join the Toronto Huskies.

With the Stags, he wore jersey #16 and had to compete for a spot against all-star Max Zaslofsky under coach Harold Olsen.

Baker appeared in just four games with the Stags.

“The main reason I did not stay is that I had a little trouble over the contract,” recalled Baker in a 1982 interview with this writer. “They didn’t want to pay what I thought I was worth. They only gave me $900 a month.”

Baker spent most of the 1946–47 seasons with the Vancouver Hornets of the Pacific Coast Professional Basketball League, finishing second in the league in scoring with 694 points in 37 games (18.8 ppg). The Hornets finished with a record of 24-14 in the regular season and 6-6 in the playoffs.

Must Read:
Take A Bow. Trae Young Is An MSG Enemy Of Old

In 1950, Baker was the only non-American on a basketball team of college all-stars billed as “The Stars of the World” for a 13-nation tour of Europe and Africa playing against the Harlem Globetrotters. The Globetrotters won the 18-game series 11 games to seven, playing before a total of 181,364 fans.

For two years, Baker played against the Globetrotters as a member of the traveling opponent teams the New York Celtics, Stars of America and Boston Whirlwind

Mainly composed of University of British Columbia Thunderbirds, who had defeated the Montreal YMHA 48-34 for the Canadian senior men’s title, our Canadian squad finished 9th overall at the 1948 Olympic Summer Games held in London, England.

Unlike the 1936 Olympics where Canada lost the gold medal game to the USA 19-8 on a mud infested outdoor court, these games would be held indoors at Harringay Arena.

Canada opened with two wins, 55-37 over Italy and 44-24 against Great Britain but dropped their third match 37-36 to Hungary on a buzzer beater by Istvan Timar-Geng.

After the game, Vancouver star Pat McGeer, who led the Canucks with 11 points in the loss, told his teammates “Look fellows, we’re not up to the top bracket yet – if we win our next two games, we’re in there. This is a good lesson.”

Falling to Brazil 57-35 and beating Uruguay 52-50 was not good enough to advance but directed Canada to the quarter finals where they thrashed Iran 81-25.

Their next game saw a 45-40 victory against Belgium and in the 9th place match they beat Peru 49-43.