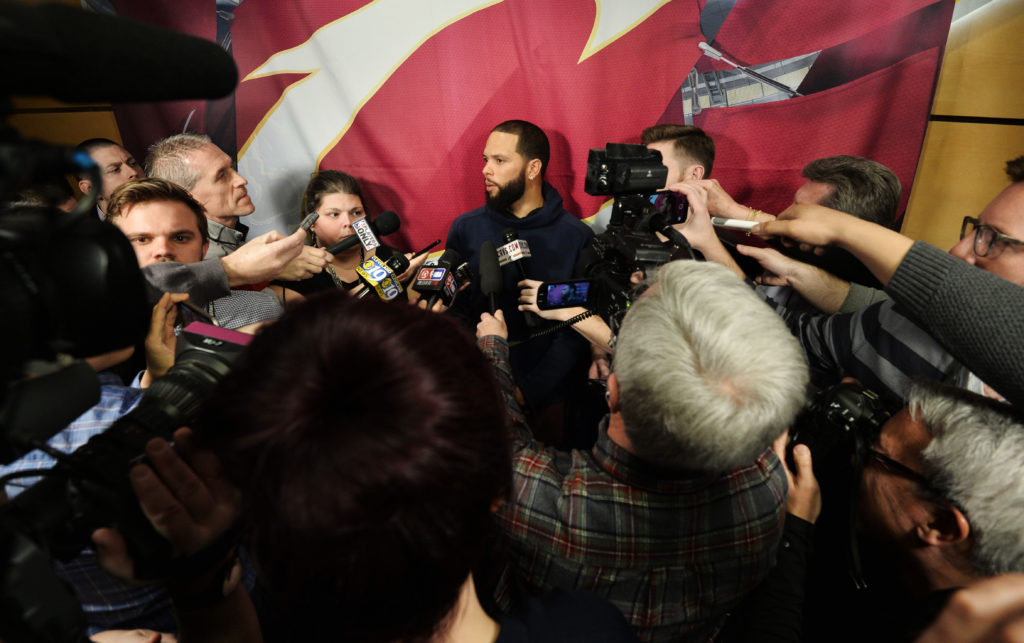 Over the last month marching towards the playoffs and potential NBA Finals rematch trilogy, Cleveland have made some Cavalier moves, whilst Golden State have armed up by adding more Warriors.

Don’t dub this Ali/Frazier of the National Basketball Association ‘Cavs/Warriors 3′ just yet. The triple-double of James Harden’s Houston Rockets, Russell Westbrook’s Oklahoma City Thunder (Why Not?) and even Isaiah Thomas’ Boston Celtics have more than just an outside downtown chance of chipping away at Larry O’Brien’s legend. But when it comes to all the King and Kevin’s men. It’s a safe bet to put your money on big numbers like 3 and 4 when it comes to the Cleveland Cavaliers and Golden State Warriors making it to the NBA’s big dance as partners for the next couple of years.

LeBron James, Kyrie Irving and Kevin Love, versus Kevin Durant, Stephen Curry, Klay Thompson and Draymond Green. It hardly seems fair, bit after the loss of some big names some former All-Stars have been given the call up to these roster roll calls.

We need to talk about the Kevins. Because not only have the Cavs got a lot of Love lost right now, the Warriors are without their big free agent ticket and new leader Kevin Durant who will be out for the rest of the forseeable season and future…if not some of the critical playoffs.

So the Dubs brought one of their old dogs back in dynamic defensive dynamo Matt Barnes. Returning to the house he called home back in the J-Rich/B. Diddy, lightning bolt logo, hero days. When Curry was just korma hot and those iconic trams ran only in the future franchise of Francisco and not the G.S.W. classic jerseys taking it back to back in Barry Bay day.

Barnes is bringing back anything but bad news to the Dubs who needed a good story once Durant’s was bookmarked and shelved for the rest of the campaign. His defensive presence is more than just a fill in job whilst Kevin is on the trainers table. He’s a certified champion. You remember his days alongside D legend Ron Artest (Metta World Peace) and doberman Kobe Bryant as a Los Angeles Laker? You can be sure former Warrior Derek Fisher does! Speaking of the Lake Show, Golden State have been moving so many gold standard players lately that after claiming Spanish legend Jose Calderon off their California neighbors they cut him after just one day to make room in the kennel for Barnes. But in saying no way to Jose they still left him with 415k in the bank for a days work and a bunch of Calderon Warriors jerseys for his family and friends. Not a bad 24 hours in the office for a back-up whose a good pick-up for anyone.

Meanwhile whilst defending the land, the reigning champion Cavalier have added so many more league pass household names to the back of their jerseys, that just a couple of years ago these initials and Monica’s would have guranteed them the title…if not now.

First Atlanta Hawk dead-eye shooter Kyle Korver came aboard before the All-Star break to offer some arrow assist to the King from his castle in downtown Cleveland. And he’s been helping break franchise records ever since…against his old team nonetheless. Then Korver went even further than his stroke, convincing his former Utah Jazz running mate Deron Williams to join The Land of the King. Just after LeBron seriously stressed the need of a playmaker following a ‘Bron botched Kevin Love trade to New York for the Knicks’ Carmelo Anthony that James hated. Now the former best Point Guard in the league D-Will is back to his old ways backing up the most underrated top P.G. in the league, Kyrie Irving. And if that wasn’t enough, the former Dallas player is bringing another Maverick with him in the form of sought after big man Andrew Bogut. Not just a former Golden State Warrior…but the Dub that everyone in Oakland argued that would have been the championship and contender difference maker had he not been injured in last years finals. But Bogut in a deja-vu twist of fate suffered another season ending injury just minutes into his Cavalier career. So Cleveland have agreed to bring in yet another big man in former Milwaukee Buck standout Larry Sanders, who left the league a couple of years back to focus on his mental health.

Yet both these would be dynasties have big names across the board. From Shaun Livingston, JaVale McGee, Zach Pachulia and David West in Golden State, to the Cavs’ Richard Jefferson, Tristan Thompson, J.R. Smith, Iman Shumpert, James Jones, Channing Frye and dunking Derrick Williams. But when it all comes down to the one game and play that matters will it be the Chefs pot or the Kings throne?

Watch this space. And the battle for the top. Only a Warrior can take the Kings crown…a real true one.