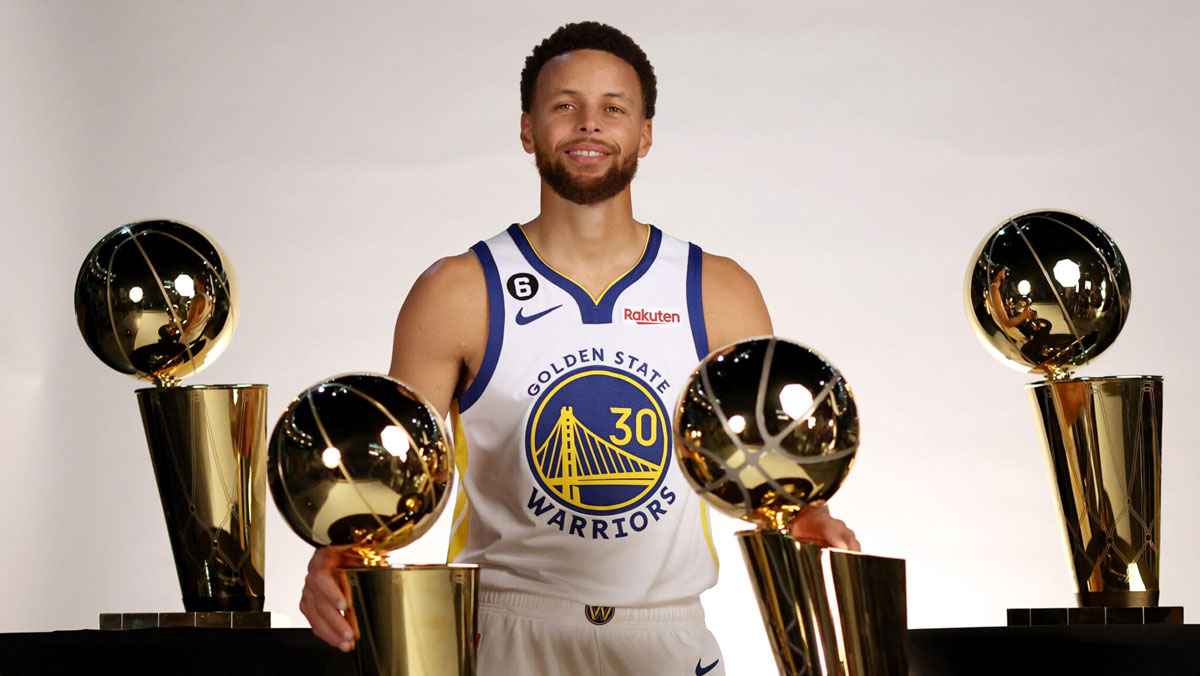 Mining the league’s MVP for the last two seasons, the jokes on you if you think an early exit from the post-season will always be on the cards for Nikola Jokic and the Denver Nuggets. Stone-cutting their way to the ‘chip, this is the year they get Jamal Murray back healthy. It’s about to bubble again like Disney World. Adding Kentavious Caldwell-Pope, Bruce Brown and Ish Smith to a unit of Aaron Gordon, Jeff Green and third head of the snake Michael Porter Jr. makes these Nuggets ready to strike gold.

Last season, the Timberwolves may have celebrated a play-in win like they just won the NBA Finals, but they sure will miss Pat Bev. Anthony Edwards will shake off recent comment controversy to lead this ball-club that previously belonged to friends Karl-Anthony Towns and D’Angelo Russell.

Now, look for Towns to form a Hakeem Olajuwon and Ralph Sampson like towering tandem with big new addition, Rudy Gobert in the twins. A rocketing inferno for the Wolves, with the three-time Defensive Player of the Year and EuroBasket top performer. Austin Rivers is here to steady the Lake Minnetonka tide, too. If Russell can accept his third-string role and ice opponents in the clutch, Minny could be loading towards the big-time. And a greater statement than their new jerseys.

Harden. Durant. Westbrook. Even Chris Paul and Paul George. The Thunder have lost so much potential reign over the seasons, but the forecast still said it was OK in OKC. That was until top rookie Chet Holmgren (the second pick) was ruled out of the season after picking up an injury during summer hoops. Stifling his potential partnership with sophomore stud Josh Giddey. Yet despite all of these problems, Oklahoma runs through underrated superstar Shai Gilgeous-Alexander. Even if the Toronto Raptors are closely keeping an eye on the Canadian.

After losing CJ McCollum to New Orleans, Damian Lillard still showed loyalty to the max. Even though one of the best backcourts in the league has now broken up, save your tears. Portland is still blazing. A healthy Jusuf Nurkic, along with the likes of Josh Hart and Justise Winslow make RIP City deeper than you think.

But it’s the moves for NBA family members Jerami Grant (before last season’s deadline) and Gary Payton II (this off-season) that are the real steals, like Shaedon Sharpe with the seventh pick. You best believe that a champion Warriors will miss Payton II like the Nuggets have Grant ever since his Bubble breakout. This year, it really is Dame’s time. And he’s bringing the whole City of Roses with him.

How’s this for a bad note? The Utah Jazz have gone from multiple best records in the regular season to losing BOTH Rudy Gobert and Donovan Mitchell. Even the three-peat Lakers knew you don’t trade Shaq AND Kobe.

What’s left is a collection of pieces. Lauri Markkanen, Mike Conley, Jordan Clarkson, Collin Sexton, Talen Horton-Tucker, Kelly Olynyk and veteran legend Rudy Gay. It’s not dry in the desert, but who is their source? Utah will make music from a different play-book for the 2022-2023, but Jazz is all about improvisation, right?

Steph Curry, Klay Thompson, Draymond Green. This is a dynasty. The Warriors way. You only have to see the reception the champs got touching down in Tokyo for their preseason game against the Washington Wizards. The Wiz even have Japan’s own Rui Hachimura on their side. Just when the association thought we had another death of a dynasty in California, Curry and his brothers let it splash.

Must Read:
Rocketman James Is The New Big Game King With 50-11-10 Against Sacramento

Looking to keep the Jordan Poole party going, even Andre Iguodala is back for his 18th season, doing his best Udonis Haslem impression. How about a Wiseman named James? Losing Gary Payton II and Juan Toscano-Anderson will hurt them. But everyone up north knows Andrew Wiggins is the x-factor. You remember that dunk on Luka, right? Night, night!

*At press time, news of Draymond Green punching teammate Jordan Poole at a Dubs practice broke. We don’t know how the Warriors will weather the storm of this Jordan hitting Steve Kerr like fall-out. One things for sure, this week’s episode of LeBron James’ ‘The Shop’, with guest Green hits different.*

New Clipper John Wall’s heartfelt Players Tribune article about overcoming suicidal thoughts is the most moving and inspiring piece of prose since Kevin Love opened up about anxiety. We almost lost him, but he should be here. Forming a formidable big-three with Kawhi Leonard and Paul George, now in their fourth year together.

Los Angeles has been Clipper nation for more than a minute now. Now you can add Norman Powell plus Robert Covington to the coveted Reggie Jackson, Marcus Morris Sr., Terance Mann, Nicolas Batum and Ivica Zubac mix. Coach Lue has a contender on his hands.

LeBron and the Lakers failed to qualify for the same play-in tournament, the King ridiculed a season prior when they beat last season’s champion Warriors. Now, James wants his Californian throne built on a Bubble championship. The foundation of Anthony Davis’ creaky legs and whether Russell Westbrook will do a 360 and play like the superstar they brought him in to be, last summer, is a shaky prospect at best.

Luckily, new coach Darvin Ham will make sure they go hard as a mother. Just like former draft pick Patrick Beverley, reunited like Thomas Bryant and EuroBasket standout Dennis Schröder for his own redemption season.

The Lake Show caught flack for being too old, last year. In response, they have rebuilt with Juan Toscano-Anderson, Lonnie Walker IV and Scotty Pippen Jr. But they could have brought superstar vets Dwight Howard and Carmelo Anthony back. Please don’t get us started on how they also did Malik Monk. Let’s just hope Kendrick Nunn is far from done.

Like the drama in Boston, all the focus in Arizona right now is on disgraced former Suns and Mercury owner Robert Sarver. He’s gone now, but the fact remains the league should have done better.

With that out the way, and looking to avenge an early exit in what should have been their return to the Finals. Point God Chris Paul and pure point machine Devin Booker should surely book themselves into the playoffs.

But you watched Deandre Ayton’s media day interview, right? If you’re not concerned, then we have a problem. Just like the one with Jae Crowder. Are the Suns setting before the dawn of a new season?

For having a name like the Kings, Sacramento sure are throne shy. Expect all that to change soon with fourth pick Keegan Murray looking to be the post 2000s future, so many came to be, but didn’t conquer. One of the league’s most slept-on superstars, Domantas Sabonis came aboard back in February in a trade deadline blockbuster.

Veteran hybrid forward Harrison Barnes is still here. Just like young star De’Aaron Fox. Meanwhile, the Kings were prepared to show Malik Monk the money the Lakers weren’t and the hot streak of former Hawk Kevin Huerter is getting paid too. A new kingdom is slowly getting built. Soon you’ll be able to hear cowbells from the castle again.

Lil’ Wayne called Luka Dončić a “ho” on Twitter and ended up looking like a b****. That’s how big the best Euro player and post-Dirk Maverick leader is. Dallas are still a few pieces away. And from Kristaps Porzingis to Jalen Brunson, they’ve lost a few.

But look, Luka can do it on his own. He just doesn’t have to. He has Christian Wood, Tim Hardaway Jr., Spencer Dinwiddie and the energy of JaVale McGee for all that. It’s more like LeBron put it, Luka is a “bad motherf*****!” Time to win like one.

It’s no secret that aside from their own six God, Eric Gordon and big ‘John Wick’ and ‘Hustle’ cameo star Boban Marjanovic, this Rockets team is about as recognizable as NASA astronauts outside their uniforms.

Top rookie Jabari Smith Jr. wants to change all that. Making his own name for himself like Kenyon Martin Jr. One day these young Rockets will take off. Until then, they’re grounded, like the kind of punishment they would have received from their parents just a few years prior.

It used to be bleak in Memphis, but now they’re one hit away. Poke these Grizzlies if you dare, but these bears may go all ‘Revenant’ on you like your name was Leonardo DiCaprio. Painting the perfect play-book picture like Da Vinci, Ja Morant is the next icon of the L.

Vince Carter hops in a Steph Curry game. Ja’s vowed to gift a Rolex to whoever makes the team. He knows what time it is. As do Desmond Bane, Dillon Brooks, Jaren Jackson Jr., Tyus Jones, Brandon Clarke and veterans like Steven Adams and Danny Green. The clocks ticking for those sleeping.

The Pels have gone from the haul of an Anthony Davis trade package, to a legit contender ready to ball out for their own Mardi Gras parade. Brandon Ingram is the only remaining former Laker from the AD switch, and a bona fide superstar to boot.

It’s showtime with him and a healthy and in-shape Zion Williamson running the floor, all the way to franchise promise. With bucket-getter CJ McCollum, the Glen Rice to their Shaq and Kobe. If that, dunking Larry Nance Jr. and Jonas Valanciunas manning the middle wasn’t enough, they also have EuroBasket MVP Willy Hernangomez in this melting pot of basketball brilliance.

Gregg Popovich’s motivation to return season-after-season is as hilarious as it is real (“the pay cheque”). But you only have to look at Becky Hammon and the WNBA champion Las Vegas Aces to see how much his program breeds W’s. Now, as more and more of his legends enter the Hall, he’s looking after a Spurs squad so wet behind the ears it’s like they’ve already hit the showers.

Baylor rook Jeremy Sochan (bringing that dyed Dennis Rodman energy back) leads a list of names you’re more likely to forget than the classmates in your high-school yearbook, but Pop coaches like this is college. He could make a winner out of any geek off the street. And here he has some young guns ready to earn their Spurs.