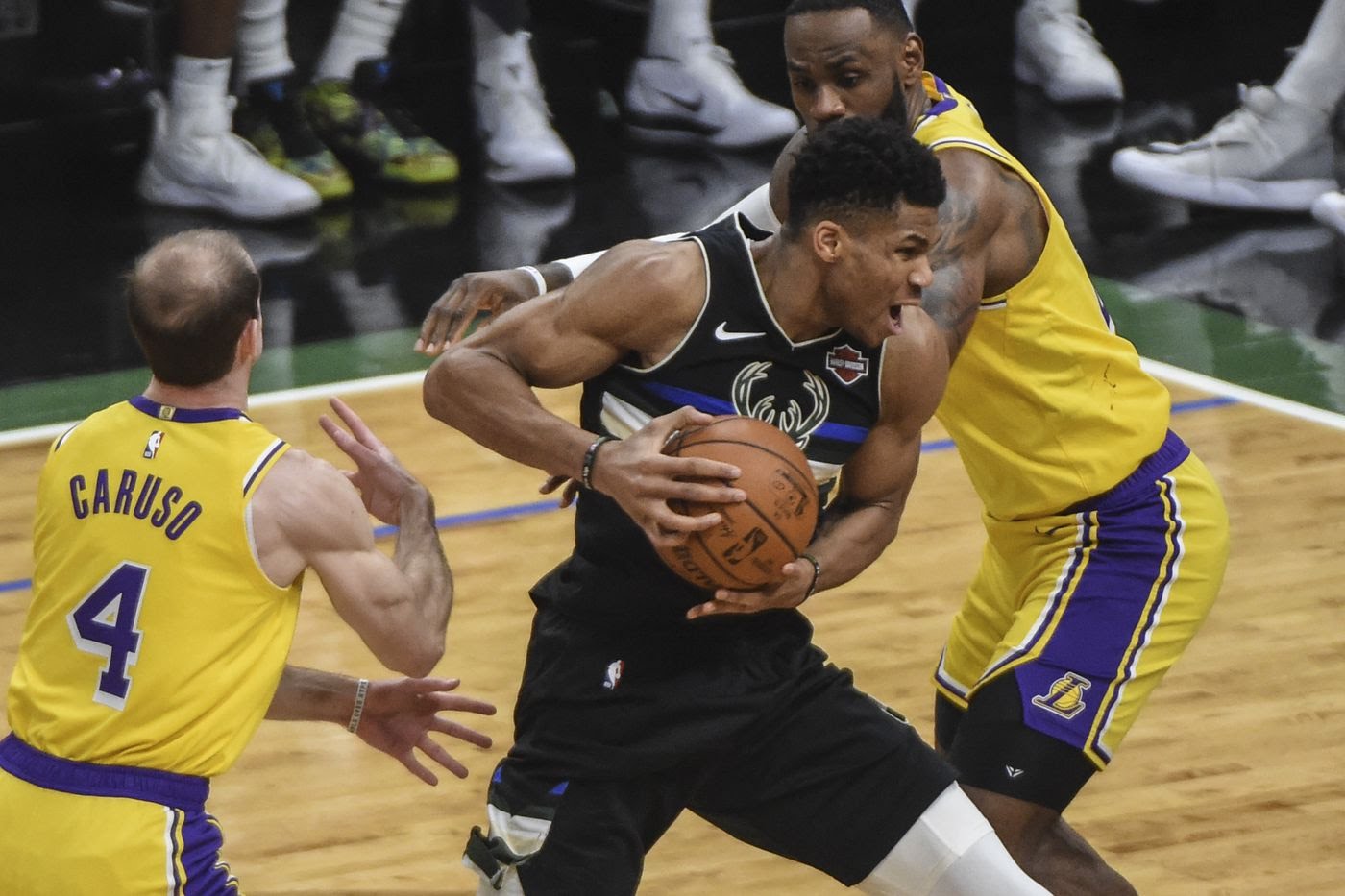 the bucks stop the lakers here

Like the hours of a full day and the quarters of a full game, the best in the West and East association Los Angeles Lakers and Milwaukee Bucks shared more to start this NBA season than calling Kareem Abdul-Jabbar or Lew Alcindor their own legend. The team that pregame pitches Basketball footballs and the one that fakes wrestling fights for fun had the same league leading win/loss record going into finally matching up like two swipe right Tinder profiles today. But after the 24 of today’s 48 minute epic both teams would no longer have the same record anymore.

Like the meme of two Spider-Men pointing to each other, this match-up was even bigger than the May 21st 2021 scheduled one between both ‘The Matrix’ and ‘John Wick’ Chapter 4 of Keanu Reeves taking on the only man who could stop him…himself.

The King and his new man Anthony Davis have looked unstoppable for the Lakers so far this season, but like their opening night loss to the Los Angeles Clippers derby game, STAPLES neighbours and ‘Star Wars’ fans going into ‘The Rise Of Skywalker’ after watching ‘The Last Jedi’, I had a bad feeling about this one. As a Lakers fan this writer knows the Lakers have had some troubles when it comes to closing out games they’ve even won this year…although they always finish strong like Mister Cee. And this is coming off a loss to the Pacers like the back and forth of the 2000 Shaq and Kobe first finals championship. A team that they haven’t bogey won against for years. And after this game-at least for now-the Bucks have steered this season in their direction.

Greece’s Giannis Antetokounmpo showed all you need is one superstar (and a Most Improved in All Star Khris Middleton) tonight as he was a freak from downtown making a career high five threes (that matched a red hot from downtown Danny Green) en route to a double trouble double of 34 points, 11 rebounds and 7 assists on the City Edition court in Wisconsin.

The Lakers big man Anthony Davis on the other hand was brick butter in relation to the Alphabets smooth spread from downtown. Going zip for six from the perimeter on an outstanding shot he worked on in the off-season. He still carried his team inside however with his own double of 36 points, 10 rebounds and one final breakaway dunk on Giannis of “I’ll be back,” terminating passion. A team that struggled and although never giving up still have a lot to work on if they want to be truly King like LeBron, who had another triple double of 21 points, a reverse 12 rebounds and 11 assists as he glove passed Laker legend Gary Payton on the all-time list at number nine.

Must Read:
At This Point I Wouldn't Even Trade Alex Caruso For Anthony Davis

The Lakers were held to 17 first quarter points, almost as bad as the 9 they gave the Magic a week ago as the Bucks stopped the Lakers here leading by as many as 21. The Lakers rallied back like Serena however, but 111-104 to Milwaukee was all she wrote.

The Lakers may have been without Kyle Kuzma, but the Bucks were without Eric Bledsoe too. There’s no excuses in this league.

If the Lakers want to make it to the Finals this year this is the team to beat and they still need to worry about their neighbouring one that will Kawhi and Paul George for sure make the West best this Christmas Day. They need a New Year’s resolution.

It’s time for them to regroup after this road trip has come to the end of the road here in Cream City.

But the Bucks are the crop right now and at home as the best team in the league.

But as the family reunion Antetokounmpo brotherhood of Giannis and his teammate Thanasis and the Lakers South Bay call-up Kostas (should have put him in like Lue on Iverson) shared the floor and swapped jerseys like Japanese NBA history makers Yuta Watanabe and Rui Hachimura again this was more than a game. Still, the Lakers and Bucks have one more date before the playoffs, so let’s get ready for the rematch.

This one will be for all the bucks.