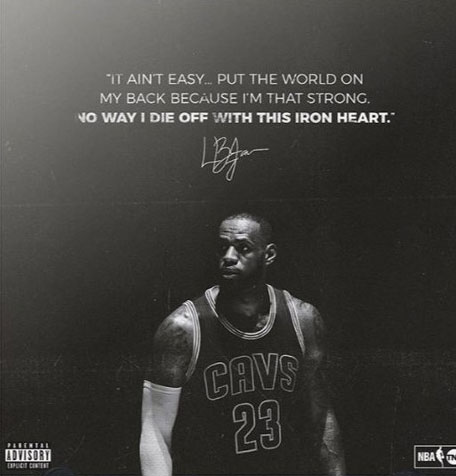 Who knew Kevin Durant and LeBron James could spit that fire!

If you know the history of the game then you should be well versed in the fact that athletes want to be rappers slash hip-hop artists and hip-hop spitters want to be ballers.  Like many before them, LeBron James and Kevin Durant decided to put their lyrical skills on display by coming together during the 2012-13 NBA lockout season to record one of the best joints ever released by a pair of NBA ballers. “It Ain’t Easy” recorded at Spider studios in Cleveland, Ohio, re-produced by Franky Wahoo and Stew Billionaire features Durant and James spitting some vicious bars over an ill-laced beat and a easy to digest hook that keeps your head nodding. Both NBA superstars rhyme about not being easy to reach superstar status and the sacrifices they had to make to reach their goals.

“Look, I cut me, I bleed out, dedication, hard-work, sacrifice, meditation. I meditate up on a goal that I’m trying reach/ Grinding all-day to the top and I ain’t trying to sleep / Come and get me, come and get me,  I’m an animal cutting throughout your brain like a….” unloads Kevin Durant in the freestyles opening 16 bars

“It ain’t easy… on the path I’m on, but, put the world on my back because I’m that strong / Long journey I been on / from the very start no way I die off with  thus Iron Heart”