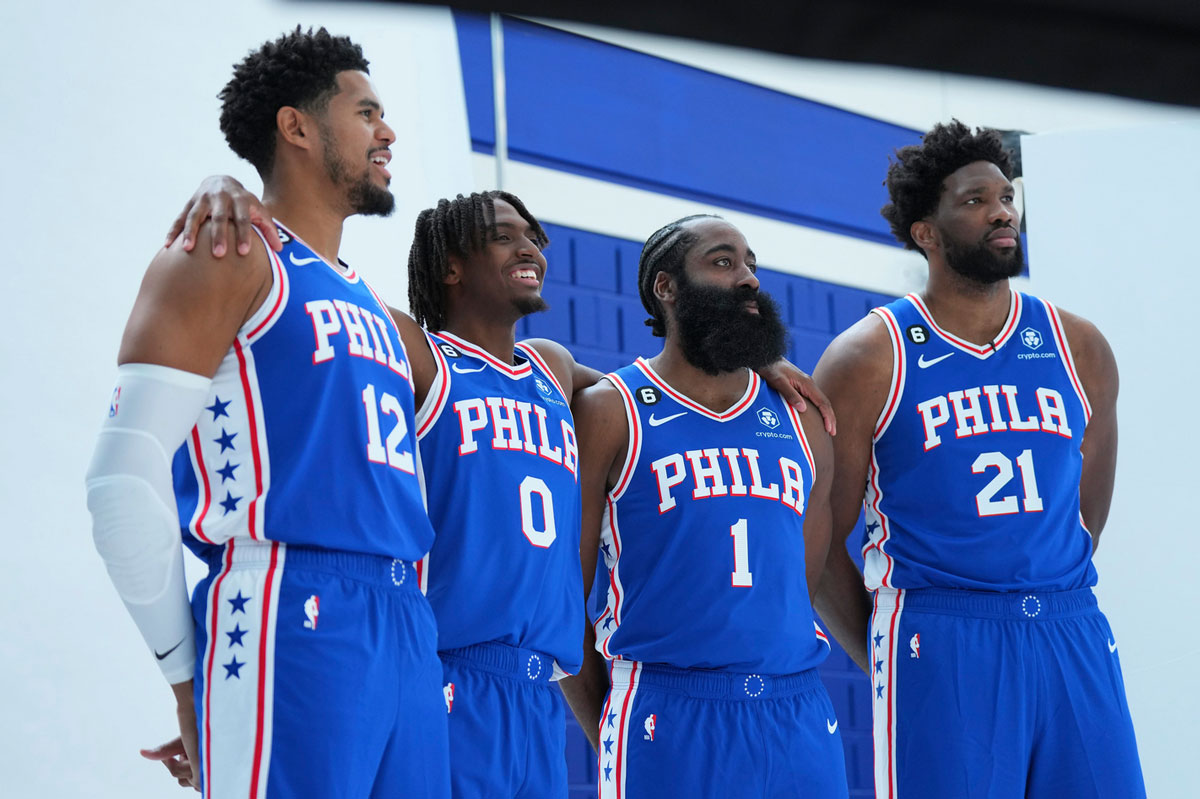 The C’s are the reigning Eastern Conference champions. Even though Curry and company made mincemeat out of them in the Finals, this is still a raw team almost ready for a ring. New additions Malcolm Brogdon and Danilo Gallinari will help.

At the helm, Jayson and Jaylen are a terrific tandem. Beyond Tatum and Brown they’re Smart with the Defensive Player of the Year. Their coach, however, is not. All the world cares about right now is the Ime Udoka drama. A one-year suspension means the fallout in Beantown will last beyond this season.

Kevin Durant and Kyrie Irving are here. How long will Steve Nash be? Brooklyn’s brass got about as much sleep this summer as a Beastie Boy, but this team could still be ill. As long as they get their court communication on point.

T.J. Warren, Markieff Morris and Yuta Watanabe. These are all slept on add-ons to a nice unit featuring Patty Mills, Seth Curry and three-ball Joe Harris. How Ben Simmons comes back will determine just how far the Nets can cut it in the East.

Is the Julius Randle drama over? Because Maple Mamba RJ Barrett is about to drizzle. Taking it to the max like his brand-new contract. These are the toughest Knicks since Ewing, Oakley, Mase and Starks. And maybe even the best. With all due respect to Carmelo Anthony, who needs a team to pick him up, right now. Are you listening, New York?

As a matter of fact, these Knickerbockers are almost a 90’s/’Melo era hybrid, with Randle and RJ now backed by what could be their strongest point since Mark Jackson. Legendary vet Derrick Rose, all dunking Obi Toppin and EuroBasket sensation Evan Fournier are now joined by the potential of Cam Reddish and Jalen Brunson, the real difference maker that could take them to the next level. He has 104 million reasons why. The core of the Big Apple just got sweeter.

Someone call Adam Sandler. The Sixers swapped Simmons for James Harden, Joel Embiid should have won the MVP, and the process remains. Patience in Philly may be running thinner than Moses Malone’s hairline, but the Sixers should have been “fo’, fo’, fo’” by now. Former Sixth Man of the Year Montrezl Harrell is looking for a more stable home in the city of brotherly love after Charlotte and Lakerland.

P.J. Tucker brings more than sweet sneakers to the locker room. Philadelphia are as reliable as veteran superstar Tobias Harris (at this point the new Rudy Gay of the league). But Doc Rivers has got to like more than just what he sees on adult Twitter. Can he hack it?

The toughest division in the entire league isn’t this cold without our North star. This year up in the 6, they’re patching a perfect tribute to the late, great Bill Russell like the rest of the league. Talent is the dominion of these Raptors. Rookie of the Year, Scottie Barnes. Pascal Siakam. OG Anunoby. Gary Trent Jr. Fred VanVleet.

They even have the Hollywood hustle of a movie star in Netflix’s very own, Juancho Hernangomez. Who showed out alongside his MVP brother for a EuroBasket victorious Spain. More than a fictional game. Even Chris Pratt couldn’t tame these Raptors.

How do you improve on one of last year’s most exciting teams? One led by All-star guards DeMar DeRozan and Zach Lavine? You start by buying the likes of Goran Dragic and Andre Drummond from Brooklyn to bolster the bench. How does it all fall apart?

Must Read:
Deck The Hall With Kobe, KG and Timmy

With an injury to point man Lonzo Ball. Luckily his old Laker running mate, Alex Caruso can also run the hardwood quarterback position. Sometimes the wind doesn’t blow your way, but Chicago knows how to weather any storm.

Cleaner than their new uniforms, the big-three, young future of Darius Garland, Evan Mobley and Jarrett Allen already looked bright. Then after swinging a trade for the ‘Spida’ superhero and star Donovan Mitchell this summer, the Cavaliers have ensured they are ready to draw swords right now.

Caris LeVert gives them even more firepower, like Ricky Rubio. Who brings that veteran leadership like Robin Lopez. Speaking of vets, this team always has Love. Kevin has been here since the last big-three he was a part of. Cleveland, this season’s for you.

With sophomore sensation Cade Cunningham and top five pick in this year’s draft, Jaden Ivey, the Pistons are retooling for a new franchise vehicle. They’ve also got the talent to drive now. With Canadian Cory Joseph, the potential of Marvin Bagley III in his fourth season and big Bojan Bogdanovic.

Not to mention, Kemba Walker, still looking for his franchise after Charlotte. Armed with an influx of fellow Knicks, featuring Nerlens Noel and Kevin Knox II, amongst many more too, for those dunks that knock. They may stall a few times this season, but once they restart and shift the gears, it’s going to be one hell of a smooth ride in Motown.

The Pacers, once again shuffled their identity at last season’s deadline. Now, how far can Buddy Hield and Myles Turner go before the trigger is pulled again? Indy almost had a new leader in Deandre Ayton, before the Phoenix Suns matched the offer sheet on the restricted free-agent. You can see how happy Ayton was about it at the Suns media day, too.

The Pacers are led by one of the game’s greatest and long-tenured coaches in Rick Carlisle. They also have one of this year’s best draft picks in Bennedict Mathurin. Still, all of this Tyrese Haliburton, Langston Galloway and Jalen Smith talent is going to be outside the playoff picture for a few more frames, looking in with envy. That doesn’t mean we should overlook them with ignorance. Their time will come too.

The Bucks went from champions to knockouts in one season, but don’t act like they’re done. Giannis was a monster in the EuroBasket tournament, and he still has Khris Middleton and Jrue Holiday by his side for the league’s most underrated big-three.

If that wasn’t enough they still have the valuable veteran presence of George Hill, Joe Ingles, Pat Connaughton, Brook Lopez and fan favourite Bobby Portis. Grayson Allen (keep it clean) and former Raptor Serge Ibaka are big difference makers as well. Just like Antetokounmpo brother Thanasis. And we love the Hawkeye bow and arrow of sharpshooter Wesley Matthews too.

The core is pretty much unchanged, because if it ain’t broke, you know what to (or not) do. Just call these Bucks the Eastern 00s Spurs. Just much more exciting.

With one finger to the lips, Trae Young’s silencer signature may have been put to sleep by Steph Curry’s classic celebration for league best, but the Knicks killer is still ice-cold. Young knows how to make each NBA city his town, and now he has Dejounte Murray to spur him on, like Murray’s off-season beef with the number one pick.

Must Read:
Clippers Owner Steve Ballmer Dunks Off The Trampoline

Revenge is best served cold, and this will be the season the Hawks soar beyond speculation. With De’Andre Hunter, John Collins, Clint Capela and Bogdan Bogdanovic, Ice has plenty in the tray, even if he did lose his flamethrower Kevin Huerter. When the game is on the line, it’s always going to come down to the Young man with D’Angelo Russell veins.

The hive is alive in Jordan’s North Carolina. And it’s all about the Ball boys now. LaMelo is one of the most exciting young talents in the game, right now. Add the family dynamics of LiAngelo and Charlotte will be smiling like LaVar. But it’s a damn shame Miles Bridges burned his career.

There is no excuse for what he did. The question remains, will he be back? He may have been the team’s leading scorer last year, but the Hornets can still go far without Miles. Terry Rozier, Kelly Oubre Jr. and veteran star Gordon Hayward in good health and faith will make sure of that.

Forget the Heat being on. Just look at Jimmy Butler’s hair setting social media on fire. They’re still going to dread the leader of this talented vice squad, though. Once Buckets, Kyle Lowry, Bam Adebayo, Victor Oladipo and shooters Tyler Herro and Duncan Robinson welcome you to Miami, everything is on.

Sure, their court is more crowded than a club on South Beach on the weekend, but nights like that are always fun. Even lifer Udonis Haslem is back for yet another dance. Sometimes the party just doesn’t stop. Whip that hair!

The Magic haven’t really had a trick up their sleeve since the smile of Dwight Howard, and maybe it’s time to bring the free agent favourite back into his former kingdom. But now they have the number one draft choice in Paolo Banchero to bring back those Shaq and Penny days.

But should we be concerned about what Dejounte Murray said? Did he “change from the humble kid” and “lose all respect”? We should be worried with the injuries to former lottery picks Markelle Fultz and Jonathan Isaac. Still, with the Wagner brothers, Mo Bamba, Bol Bol, Cole Anthony and many more this team is raw with so much young potential. Let’s just hope it all marinates before the team is cooked.

At the time of writing, the Wizards were on a plane to the Far East for a preseason spell in Tokyo. Where Japanese-born, young star Rui Hachimura looks to lead Washington like President Biden against champion Curry and his Golden State of Warrior basketball.

Stateside, this is Bradley Beal’s team to the max. No matter how international the team is, like Kristaps Porzingis. Or Kuz smooth. Wes Unseld Jr. runs the show now from a head coaching position of power. The son of a Baltimore legend. This may be the Wiz’s best shot since the Bullets.