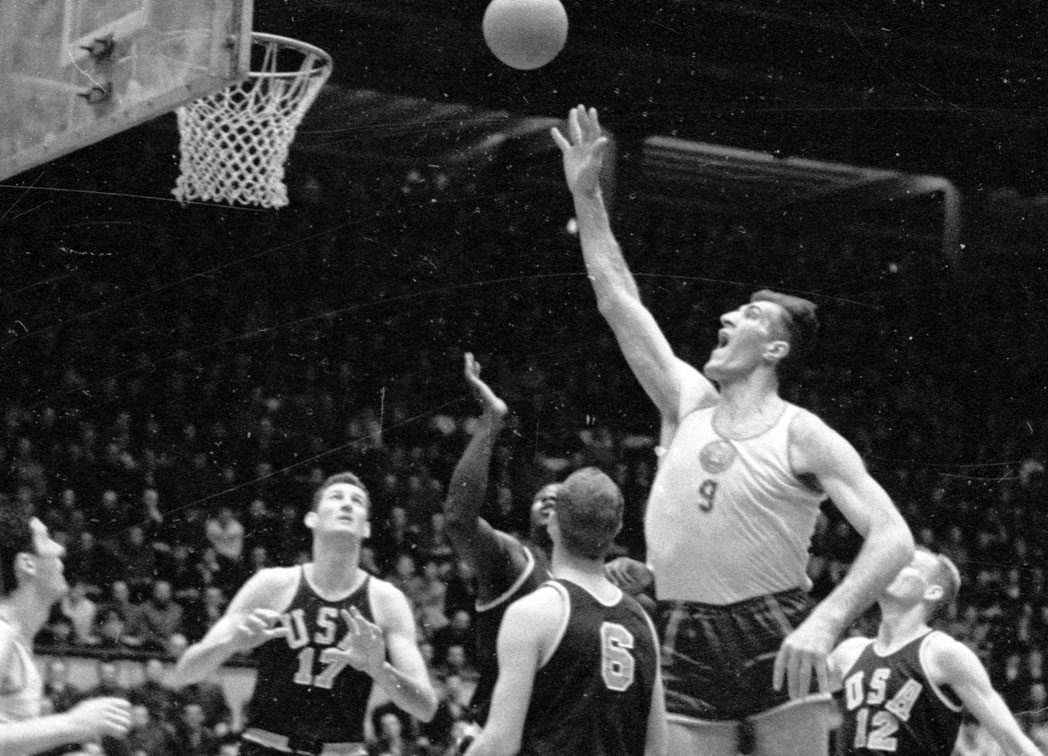 “I remember they called him the Russian woodchopper, but he had to be at least 7-foot-6 and 350 pounds…a huge man… and I had to cover him,” recalled Canadian Walter Birtles, who at 6-foot-6 and 198 pounds had to cover Jānis Krūmiņš who was listed at 7-foot-2 and 315 pounds.

Such was the David vs. Goliath scenario for Canada in men’s basketball at the 1964 Tokyo Olympics.

First, was the fact that they had gone to the Pre-Olympic Trials, also in Japan, on their own nickel.

Since Canada had failed to qualify for the 1960 Rome Olympics men’s basketball, there would be no financial support for these 64’ Pre-Olympic Trials from the Canadian Olympic Committee or Canadian Amateur Basketball Association.

Only after the withdrawal of United Arab Republic (FIBA Africa Championship 1964 winners) and Czechoslovakia (5th placers at the 1960 Olympics) from the 1964 Pre-Olympic Trials…two qualifying berths were added to the qualification tournament.

Thus, Canada and South Korea qualified to dribble into The National Gymnasium Annex in Yoyogi, Japan for the Olympics.

The Canadian rep, made up of the Canadian Senior A Men’s Basketball National Champion’s Toronto Dow Kings bolstered by four players, did not have much of a chance.

Situated in Group A, Canada’s first game was against the powerhouse Soviet Union.

More than 3,000 fans turned up to watch, not only an Olympic basketball game, but to “gawk and stare” at Russian centre Jānis Krūmiņš.

“I remember they called him the Russian Woodchopper, but he had to be at least 7-foot-6 and 350 pounds…a huge man… and I had to cover him,” recalled Canadian Walter Birtles, who at 6-foot-6 and 198 pounds had to cover Krūmiņš, who was listed at 7-foot-2 and 315 pounds. “They would try to post him inside and then just lob the ball in to him for an easy basket. But I would make sure I beat him back before he came down and held him with all my strength.”

Russian centre 7-foot-2 centre, Alexei Petrov, scored all of his 11 points in the opening quarter, giving the Russians a comfortable lead with the majority of the starters taking the bench for the rest of the match.

Must Read:
France slips past Canada at 2019 FIBA U19 World Cup

McKibbon once again led the way for Canada with 16 points.

Winnipeg’s Fred Ingaldson had 16 points in the loss. Japan was sparked by Yoshitaka Egawa’s 18 points

Canada led 28-26 at the half, but Italy scored three straight hoops to start the second and stay out front.

Warren Reynolds was top gunner for Canada with 14 points.

Reynolds had played for Canada in the 1959 Pan Am Games in Chicago and the pre-Olympic tournament in Italy four years prior.

Gabriel Vittore also had 14 for Italy.

Canada couldn’t buy a basket…down 47-18 at the half to the much smaller Mexicans.

McKibbon 22 and Reynolds 21 in defeat.

McKibbon and Rolly Goldring had 18 and 13 respectively for the Canucks.

McKibbon had a game high 22 points in the loss, where Canada had led 42-34 at the half.

Attendance: 3,086 Seven straight loses and quickly falling out of medal contention…heading into the classification round, the thought in the dressing room was, “We’re not going home without a victory,” said Warren Reynolds

With three seconds remaining in regulation, Warren Reynolds ties the game at 73-73 to send it to overtime. Peru had taken the lead on a pair of free throws by Jose Guzman with 15 seconds on the clock.

“We went flying down the floor,” recalled Reynolds, “I hit the top of the key, which is where I like to be.” Teammate Barry Howson fed him the ball. “I turned and shot without even looking. The buzzer went off, and the ball went in.”

Reynolds had 25 points in support of McKibbon’s 27.

McKibbon, who would be the third top scorer at these Olympics, was held to three points. Birtles picked up the slack with 15.

Canada would finish 14th in the 16 team tournament, ahead of Peru and South Korea.

Of their 1964 performance, McKibbon said in an interview: “Most of the countries did not outshine us. United States and Russia are out of reach in the immediate future. But there is no reason at all why we can’t match the other countries.”

“We found out early that we had to stay with out best. Basically, we only used seven or eight players. We were ahead in most of our game at the half. Then we folded completely in the second half.”

The following players represented Canada. Included are their home clubs and 1964 Olympic points per game average.

No. 14 John Dacyshyn Toronto Dow Kings (returned to Canada due to death of mother)