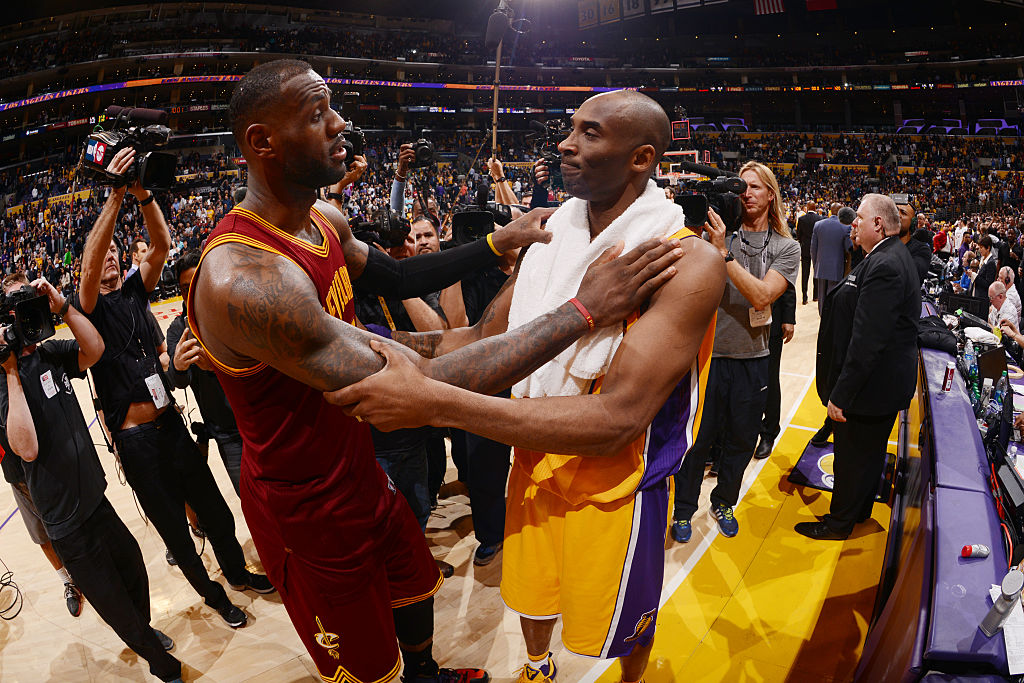 Your wish has been granted. Now the new Nike Lakers jerseys throwing it back to the traditional golden era 80’s with all the trimmings have finally been unveiled (thanks Modell’s Sporting Goods). And as this writer has ordered his Association Edition white number 23 to wardrobe go next to his purple and gold 24. It remains to be seen when it all heads up to the rafters with all those banners who will be the greatest NBA player in history to thump the storied Lakers across his chest?

Or will the man who wanted one more than Jordan and was the closest but no cigar to him, always be that Laker who bleeds purple and lives gold?

Not the Oscar winning superstar who resembled M.J.

Nor the Oscar numbers of a superstar who resembled another M.J.

Put it to rest like saying either of these guys are better than the real greatest of all-time. No matter how much like all of us tube sock dunking on our plastic baskets above the posters on our door as kids they wanted to be like Mike.

Although they are top five, dead or alive in Laker lore or the NBA’s Mount Rushmore.

So who is the greatest Laker of all-time?

Not even the self-proclaimed, “Most Dominant Ever”, Shaquille O’Neal. Who yesterday revealed to TMZ that his former foe Kobe was coming out of retirement to partner up with LeBron. Now here’s an exclusive for you people, relax…it’s just TMZ.

Not even arguably the actual most dominant seven foot center of attention and all-time, not wearing 11 rings on his fingers and toes, Wilt Chamberlain. The Big Dipper who scored 100 points in a single game…himself.

Not the actual NBA logo, Jerry West. Or the cold ice hang time to his fire Elgin Baylor.

Not the great Gail Goodrich. Don’t sleep on the real legends of the game for the second straight countdown decades later SLAM magazine.

Not the original Big Game James who is still Worthy. Or the smooth silk of Jaamal Wilkes.

Not even the real Sixth Man behind the mic, Chick Hearn. Or our writing inspiration, Jim Murray.

Not even role playing legends like the big-three of Derek Fisher, Rick Fox, or Robert Horry. But without them a three-peat would have just been clutching at brooms.

Not the Glove of a chattering Gary Payton and the second coming potential of his son. Or the Mailman of Karl Malone who always delivers until his knee gives out.

Any member of the Buss family. From the late, great J.B. to the dream of Jeanie.

Not Ingram…give it time. Soon the kid will be known only by the name on the back of his jersey.

Not Kawhi Leonard. We learnt from hometown hero Paul George not to wait. But it’s O.K. P.G. Do your thing at OKC.

Not Pau Gasol. Now this is no joke. Respect that the greatest European player of all-time not named Dirk or Drazen is a Laker legend and one of the best ever. Not just in their legendary painted lair of big-men. Sorry Vlade (but you know your one of our best bigs ever in a lengthy long lineage). You better read a newspaper or something.

Not even the original Laker legend by way of Minneapolis like Prince before the purple, George Mikan.

Not even the original Captain. The other big spectacle of Kareem Abdul-Jabbar who actually leads NBA history in points scored with that unstoppable sky-hook (we see you Kyle Kuzma). A giant figure of a man who in Time and the amazing, snug and tug autobiographies he pens (how many has he wrote over the last year?) may just be as good a writer as he was a ball player when it’s all said and done. And that’s really saying something!

Nope. The greatest Laker of all-time is Cap’s running mate. A Point Guard who could play front and center with that smile. The type of player that could unselfishly dominate the game without even taking a single shot. So don’t look the other way because isn’t that what teammwork and playing the game is all about? Architect John Wooden coaching a young Lew Alcindor would certainly agree. Wouldn’t you?!

Not only the best ever in purple and gold. But the greatest NBA player of all-time after M.J. And an M.J. himself. Number 23 held up in a mirror. Who else but a man who as President Johnson actually assisted in bringing ‘Bron to this La La Lakerland city of stars. Take that Mr. West. Only in Hollywood. A legend in two games, on the court and behind the desk. Obama would be proud. As a matter of fact he had to leave his phone call on hold. Now what do you call that? Like a behind the back rabbit out the hat…

Now as to whose better, Kobe or LeBron? Well…we’re just going to have to save that for another article…