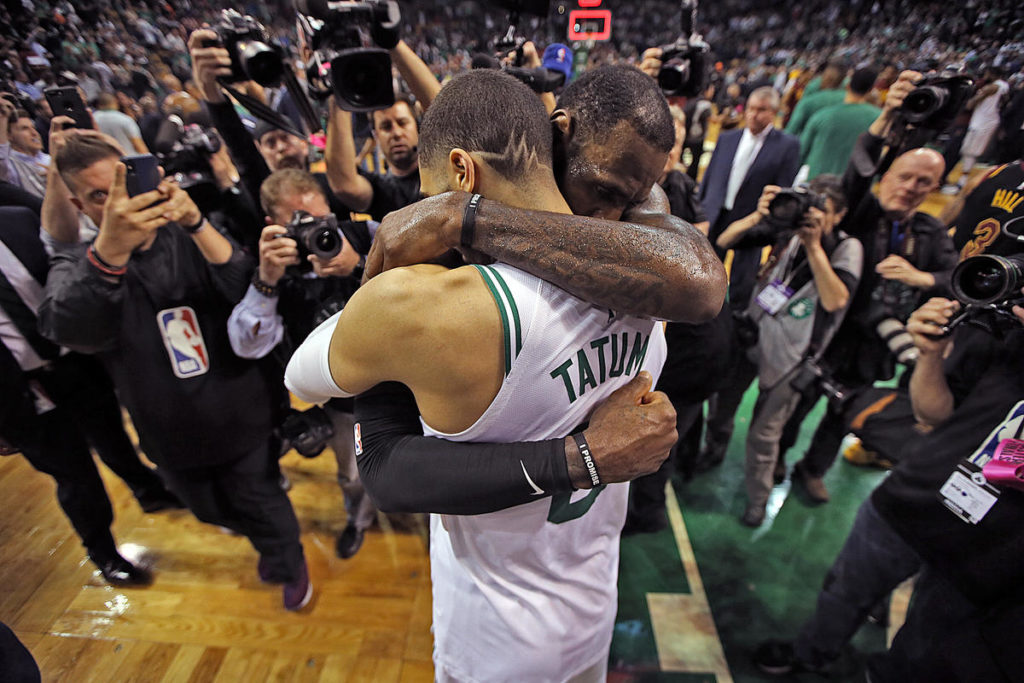 Is LeBron James Even Human?

Forget coming at the King. For HE does not miss!

The day before yesterday we were about to write an article about how a superstar-less Boston beating ‘Bron may have just birth begun the next chapter of the great Celtics/Lakers rivalry in storied NBA history. One that would follow Wilt and Russell, Magic and Bird and Kobe and Kevin and center around a renewed friend or foe battle between the King and Kyrie. But then LeBron James went and scored 35 points to go with recording 15 rebounds, 9 assists and all 48 minutes and lead his Cavaliers to a 87-79 and 4-3 series win truly crowning himself as Mr. Game 7 for the ages.

As my old American friend who sends me envelopes of USA Today sports pages (thank you!) says, “I wouldn’t bet against LeBron”!

Now whether number 23 heads to Hollywood and the Lonzo Angeles Lakers for a La La LeBronland, or processes his decision and all that’s at stake in Philly this summer doesn’t matter right now. Even if it’s all we’ve been talking about all year long.

Right now its Ali/Fraizer, Cavs/Warriors IV and chance for LeBron to tie up the dynasty battle between superteam and superstar. It’s not about a Gordon Hayward and Kyrie Irving less, rookie and sophomore sensation Celtics continuing their legendary history with their hardest worked, most impressive streak (yet!). It’s not about MVP sure thing Harden showing he’s the new King James. It’s about L.B.J. showing the NBA and even M.J. that he’s the real G.O.A.T. The only one that could beat a big four of Kevin Durant, Steph Curry, Draymond Green and Klay Thompson? A true Warrior.

Must Read:
The Butler Did It All Last Night For Chicago

No Irving. No Isaiah. No Love for the make or break. No problem!

Sure the Cavs have Kevin, J.R. Smith, Jeff Green, George Hill, Rodney Hood, Kyle Korver, Tristan Thompson, Larry Nance Jr. and Jordan Clarkson. But lets face it, this Cavalier put them, the city and the whole Ohio land on his whole back and those broad shoulders. We are all witnesses to this. But how does he do it? Is it the putting down of trivial things like social media? Zero Dark Thirty. Or the books he repeatedly reads like ‘The Godfather’? An offer you couldn’t refuse. The only thing that can touch him is more ice packs than a summer in the corner store. Like Canada’s own Tristan Thompson puts it the bruising ‘Bron is a “machine” that only needs “a change of oil”. If Mike is the Babe Ruth of this sport, then the King is Ali. And even if this is the last game James wins for Cleveland and his last year as a Cavalier, they won’t be throwing rocks at the throne or burning his robes anymore, but kneeling down in front of his banner billboard in saluting respect and throwing thanks.

At a Kareem jersey age of 33, he’s chasing all sorts of history rewriting, father-time erasing records and iconic infamy like Gillette razors wish they only could him and the best a Rick Ross can get. And at the same age this writer can’t even get a text back. You’ve seen the memes and gifs. My Vine like favourite has to be the “LeBron every year in the Finals” video to the teacher chino walking into class the same way everyday, save a changing colour in shirt.

Must Read:
For 41. Mavs GOAT Nowitzki raised to the rafters with the banner he put there

With his eight straight NBA Finals is it any wonder we wonder if postseason King LeBron James is human? The last time he didn’t make it Kobe had just won a championship, Curry was a rookie and 78% of todays players hadn’t even suited up for their first game. Not to mention only 3 of the 19 Marvel movies in the cinematic universe had been released. And if you want to keep looking at Twitter the last time LeBron didn’t make the last dance was the last time @SirDil23 couldn’t make eye contact with women. “Here’s looking at you kid”! That’s a line from an old Humphrey Bogart movie called ‘Casablanca’ from 1942. Coincidentally also the last time LeBron James didn’t make the NBA Finals.

Now that’s beyond being a superstar. That’s some superhuman, superhero stuff to marvel at. This Black Panther king is a real NBA Iron Man, Captain America hero with Hulk weight room (don’t forget the lip sync battle) smashing strength and a stormbreaking hammer of Thor dunk. Ready to snap his fingers like Thanos and you know the rest. Ashes to dust. You don’t feel so good. It’s this Avengers universe now and even if new Rookie of the Year Jayson Tatum knockout dunked hard on James…well…all that for a drop of blood. He’s ready for war with the Warriors now. And it’s going to be a gauntlet for all the stones.

You should have gone for the head. It’s the King and he’s going to sit on his throne ’till Infinity.