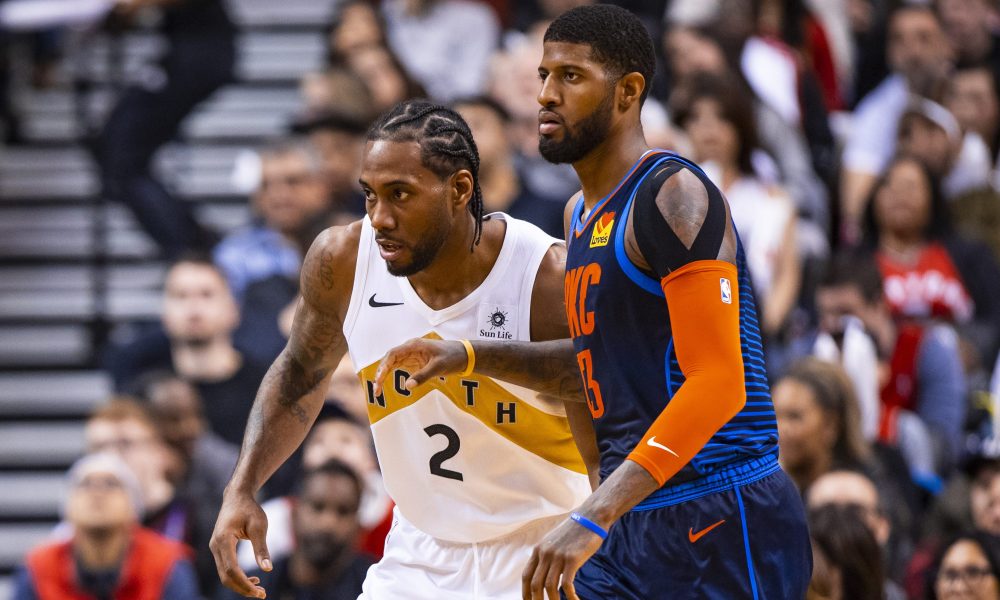 After what seemed like months, or even years, but in the end what wasn’t even a week of speculation, the last big free agent name has come off the board as reigning NBA champion and Finals MVP for the Toronto Raptors (he may have only played a year but he made hoops history worthy of his jersey being retired in Toronto), Kawhi Leonard has left the cold of Canada for his cool California home.

Last night there was an earthquake in Nevada and it wasn’t Zion in his Las Vegas Summer league debut. But this one is off the Richter.

Is it April? Even your funny feeling didn’t see this one coming. I guess all of us who make it our life’s work to talk about this sort of stuff really don’t know Jack like Nicholson.

Cue that laugh and a rib tickling roll of memes and GIFs.

Yep, you read it right and it is no bad dream you are waking up from. LeBron James may have made a grand gesture with the 6 by giving up his iconic number 23 for new Laker teammate Anthony Davis (who gets to have that number retired in STAPLES now? Both? Like Kobe has two?), who in turn waived his 4 mill trade kicker so the Lakers could sign another max player (perhaps it’s time to gift wrap give him that back), but all that came up with dust for the King who is bringing back the chalk toss this year for a Hollywood franchise that can never script free agency well.

Time to paint over that Kawhi mural with a Clippers jersey.

But that’s not it for the Lakers cross-court rival Clippers who still seek to make the STAPLES Center their staple and do for L.A. what Brooklyn have done for N.Y. taking the emphasis away from the more famous, storied franchise of the city and looking to run this town into the future.

New York will soon be known for as much the Nets as it is the Knicks and Los Angeles has already been seen just as much as a Clippers nation as it is a Lakers one, ever since they moved in their own direction with a new logo that doesn’t look the same as their downtown neighbors.

Although they may want to change their current look if they really wanted to be treated seriously.

Must Read:
Kawhi returning to Canada as Clippers, Mavs clash in Vancouver

Taking Paul George away from the Oklahoma City Thunder for loads of draft picks for the new dynamic duo is a good start.

Last season Laker fans thought hometown hero Paul George was going to come to the Lakers after years of teasing how he wanted to be there when free and any team that would trade for him would have him only serving as a rental (Okay OKC?), only for him to umbrella purple reign for the Thunder in the end. It sounded all too familiar for the Lake Show with what next year’s free agent Anthony Davis said last season. So to avoid being once burned, twice never learned they traded Lonzo Ball, Brandon Ingram, Josh Hart and a haul of draft choices to the Pelicans for AD (if you think that’s a waste think of it like this, when the Lakers got Kobe to join forces with Shaq they ended up losing over a season Vlade Divac, Eddie Jones and Nick Van Exel. Gaining back Fisher, Fox and Horry. But would you have it any other way? This move for LeBron James will be like when Kobe Bryant got Pau Gasol to team up with). They all met last night courtside in sin city. Old and new teammates. Julius Randle in the Dipset tee too. It was all good. It was all love. Although we had the Anthony Mackie ‘Avengers: Infinity War’ when Scarlett met Bruce, “well this is awkward” meme ready.

Now they may not have got their chance to create their biggest and best big three since the days of Magic, Kareem and the so very underrated Big Game James Worthy (hold that clap), but they still have one of the best dynamic duos (best since Diesel and Mamba) in the NBA to rival the Nets gain and the Clips new Jordan and Pippen of, Kawhi and P.G. in a league where maybe now the classic, golden era one-two punch has replaced the superteam. They just need another Anthony finally, Kyle Korver downtown and Andre Igudola as their sixth. As now they are bolstering their bench resigning JaVale McGee, Rajon Rondo and KCP and bringing in last season Warriors, Quinn Cook and what could be huge in DeMarcus Cousins’ Pelicans reunion with Davis and Leonard’s former Raptors and San Antonio running mate, Danny Green today. Not the Toronto Star they wanted first and foremost, but still a great pick-up in La La LeBron’s Lakerland.

Must Read:
What if Wilt Chamberlain had been allowed?

What was he just saying about two superstars on the same team? As Kawhi and George join forces with former Lakers, defensive dog Pat Beverly and 6 God of all-time Lou Will (the celebration after they won in Vegas is real) to make this Los Angeles rivalry the best it’s ever been or been seen. And it’s all thanks to a Lakers legend taking the gold away from the purple. As Jerry West proves why he is the logo becoming a winner in the NBA more in his front office days than his playing ones. The icon that won a Finals MVP for the losing side has just added this year’s one and champion in Leonard for four years to all the free agents he’s managed to bring in to his ball-clubs. Whether it be Shaquille O’Neal in Los Angeles as a Laker, or new Net Kevin Durant for the Golden State Warriors. Now for this executive California King, THAT’S a big-three people.

Derby days like Liverpool and Everton or Manchester’s City or United in soccer. Whoever wins this heated rivalry in downtown’s battle for Los Angeles will be the King like LeBron hope he can be again after his crown slipped in this game of thrones. And let’s not sleep on the R.J., Randle, Payton and Smith Jr. Knicks who could really be something in the future fight for N.Y. But if you come at ‘Bron you best not miss as LAC look to put up their own banners now instead of covering all the ones the Lakers have won up there. The Clippers are the talk of the barbershop now and a long way from the DeAndre drama or the Blake and CP3 LAX soaring days that started with a Laker nixing. Now the sky beyond the ceiling of the rafters with this former Raptor is the limit.

But here’s the tip. It all starts on the hardwood. Let’s take it to the floor. Supreme court is about to be in session.

Far from a Ball reality show, Hollywood blockbuster drama like this just can’t be wrote with special effects. Now playing in a theatre near you, whose holding the popcorn?

Time to shake the world.

Fireworks after the fourth? Kawhi to the Clippers? Stranger things have happened. One Summer can change everything.