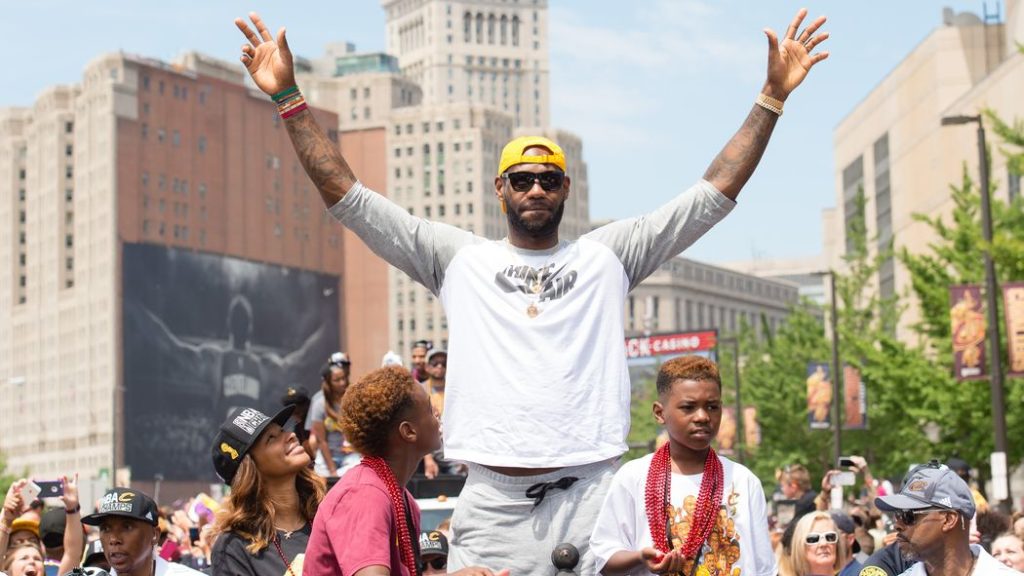 They’re so last season. Some may say like Golden State as true warrior LeBron James and his King Cavaliers started their victory lap of Cleveland in a drop top.

It was so hot this season the Fresh Prince’s classic ‘Summertime may as-well have been playing as the King sparked off nostalgia.

Decked in new sneaks and Nike attire LeBron stood centre court on the parade stage as the city of Cleveland witnessed something they’ve never seen before.

52 years. Over half a century without a title victory in any three of the major sports. Never before in Cavalier history…until now. As the King and all the Cavs men did the impossible. Coming back from a 3-1 deficit that had never even been done before in Finals history, not once, not twice, but three times as they beat the Golden State Warriors in the do or die end of the fourth quarter of Game 7.

No wonder what looked like every inhabitant of The Land took to the streets to see the promise that LeBron made delivered door to door. LeBron is built like Karl Malone. Isn’t it time we started calling the King the Mailman?

Posted up shotgun to James, Larry O’Brien was given a tour of a city he’s never seen before as millions of people reached out to touch gold or the wine players that rocked it.

It looked like there was no strict dress code either as Shump and Smith were doing the no shirt dance. J.R. looking like he was wearing the same clothes he did when the final buzzer rang out to end the series.

Still tears turned to cheers as the second coming of ‘Bron showed that miracles do happen. The return of the King turned wine to champagne and gold and the whole city got to toast and bask in it all on a perfect afternoon in June.

Must Read:
Amped up: Jason Watts aims to make history by jumping from Canadian college to the NBA

A day so Lou Reed perfect that by the end of it the free agent to be reassured fans he’d be keeping his number 23 jersey on for Cleveland. No need to put it up in the rafters with that banner just yet. Even Richard Jefferson came back out of retirement…we think! It may have just been the champagne and getting drunk off the crowd talking. What more could Dan Gilbert ask for?

Rolling round in a Rolls Royce convertible with his kids and his new best friend Larry the legend LeBron acknowledged his home crowd advantage. “I’m nothing without this city. I’m nothing with you all,” the King told his people. “Let’s get ready for next year.”

Ready for another lap? Go ‘All In’ or go home!