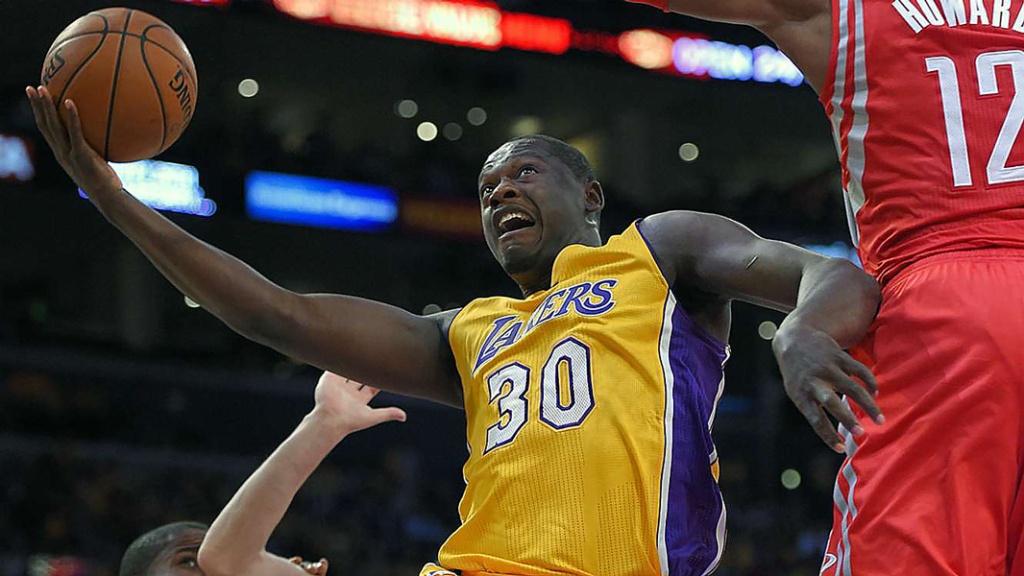 Lakers Need To Handle Randle With Care This Season

We’re not sure who the Los Angeles Lakers will pick with their number two selection in this weeks draft, but we do know this; they’ve already won the lottery.

Even if they did break a leg with their good luck to begin last season.

After his bad break in his rookie season debut last year, the Lakers need to break in sophomore Julius Randle the right way this season. They need to make this kid one of their top priorities and the next big star and big man of their long linage of a big and tall legacy, more well known than the XXX-L clothing retailer.

They need to do this before this talented young, big man becomes the next Greg Oden injured disappointment.

The Lakers even know when a top pick turns to a forgotten veteran, like when Kwame Brown anchored their front court. As well as knowing what it’s like when a top drafted big, big star turns into…say an Andrew Bynum.

Randle is neither of these guys or things. He’s his own man and talent. Still, it’s boom or bust time for him and the Lakers as they try and rebound with this post player from their worst season in history. Sure everything goes through Kobe, but in his Kareem like rocking chair tour of the league, number 24 will soon be retiring to the rafters of championships and Magic. From then on out someone else has to lead the way.

Sure the name of this new Lakers leader may well be Jordan in a fans dream, as the late first rounder Clarkson earned himself a place on the best rookie team after a stellar half season. Proving to be even more better than most top ten players in just half a campaign of burn.

Technically however before the injury, Julius was a far better projected player than Jordan. Whether he still will be after his recovery and lack of first year experience, remains to be seen when he takes to the floor with hopefully the critical confidence this franchise will suit up their new face with.

Still the Lakers will technically speaking too have twin top flight rookies running with each other as Randle barely logged a full quarter of playing time last year in his sole, season debut game.

This losing season may well be a blessing in disguise as the Lakers could run with two towering, big-men also for a double act, painted and potential dynamic duo of the future. Especially if the Lakers pick fellow Kentucky grad Townes, then we all know how crucial and important it will be for the Lakers to implement their cat Randle in the right way.

And with the upcoming free agent market, who knows who will be added to the new show in time?

Then when it comes to Randle, Kobe won’t have a problem with passing more than the ball.