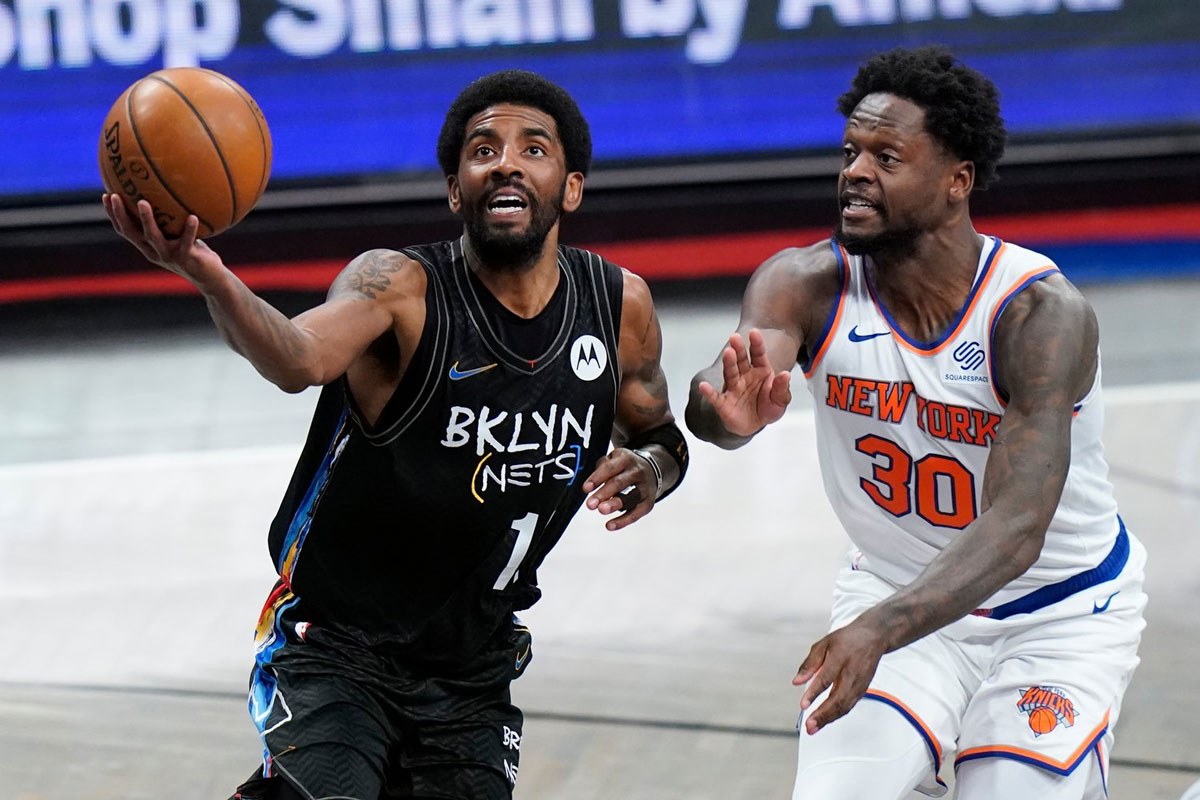 Aside from the legends that are cemented in the history they blacktop cracked at the hallmark Rucker, it wasn’t long ago that New York basketball was as rotten as apples that fell from a tree a year before.

Now the state of hoops in the city that never sleeps is fresher than Broadway bagels on a Sunday morning.

Or a Syracuse orange.

There hasn’t been this much basketball buzz in the city since ‘Melo.

It hasn’t worked as well as this since the sweat of Ewing in the 90’s Mecca golden era of hoops in The Garden.

The Nets used to be in the Garden State of New Jersey. The only times they ever made noise like Springsteen out of the Meadowlands was when Jason Kidd put this whole team and city on his back like an ’01 Iverson. Turning dunking wings Kenyon Martin and Richard Jefferson into stars with his sauce and taking this team to the NBA Finals…twice. All before they brought out the brooms.

Now it’s Brooklyn all day for the Nets and a team that looks like it was assembled on 2K. One of the games greatest Kevin Durant is a pure point machine all on his own. Add his former Oklahoma teammate James Harden and you have two of the top three in one city, on one team. Then there’s the enigmatic and compelling Kyrie Irving completing the biggest three of all-time. An artist in the Nets new Basquiat jerseys.

Bringing abroad brought out bigs LaMarcus Aldridge and Blake Griffin for a dunking DeAndre Jordan reunion and you have quite possibly the greatest starting five ever assembled outside of an Olympic Dream Team.

And then there’s the bench.

And again and again.

This team is deeper than the trouble the rest of the association is in right now.

That is if there are any players left that haven’t already signed for Steve Nash’s show.

The balance of power in New York basketball seems to have shifted and everyone in the city loves it…except Julius Randle’s son. But hold on now. Let’s play fair. Following the craziest year in civilisation, here’s a headline that still sounds like something from the apocalypse.

‘The New York Knicks are good’.

They will make the Playoffs.

They may even make for a NYC conference contention rivalry come the postseason that we wanted to see intensify out in California for the two Los Angeles teams.

Former Laker Julius Randle has proved all those hater “trade them kids” fans that LeBron’s Los Angeles has lost another All-star after former Brooklyn B.I.G. player D’Angelo Russell on his version of Linsanity and the new KD in New Orleans’ Brandon Ingram. And just you wait until his Pelicans point Lonzo Ball turns up like his little brother LaMelo.

Canada’s very own RJ Barrett remains the Maple Mamba as he spreads across 94 feet like syrup. Add the fast ascent of point Immanuel Quickley and that’s a big-three of tomorrow. Let’s not forget the French revolution of Frank Ntilikina and the young studs of Elfrid Payton and Kevin Knox II.

Not to mention Nerlens Noel. Or valuable vets like Taj Gibson, Reggie Bullock and the reunion of Derrick Rose in this concrete jungle. The Knicks tape plays again. Sound good? How about a cherry on top with rookie Obi Toppin jamming on everybody like the Dunk Contest? Even his street-ball legend pops, Dunkin’ Delight.

They say heaven is a playground like Rick Telander, but hoop heaven may just be found in the arenas that are still empty, but for a whole different reason.

The Garden can be Eden again, but right now when it comes to the state of New York hoops, no one is sleeping on Brooklyn anymore.

And that’s just the men.

Because the next great basketball icon belongs to a league of her own. You can expect great from Sabrina Ionescu and the WNBA New York Liberty team she is set to lead like the torch of the cities statue. The most famous landmark outside the Empire State. Lighting up the five boroughs like Times Square at midnight.

Did you see the iconic SLAM cover? Because it sold out…TWICE! Sabrina may have burst in the Bubble with an injury, but she’ll never drop the ball with the likes of Asia Durr, Natasha Howard and more to pass too. The Queen of New York.

This city is about to have more parades than Macy’s Day.