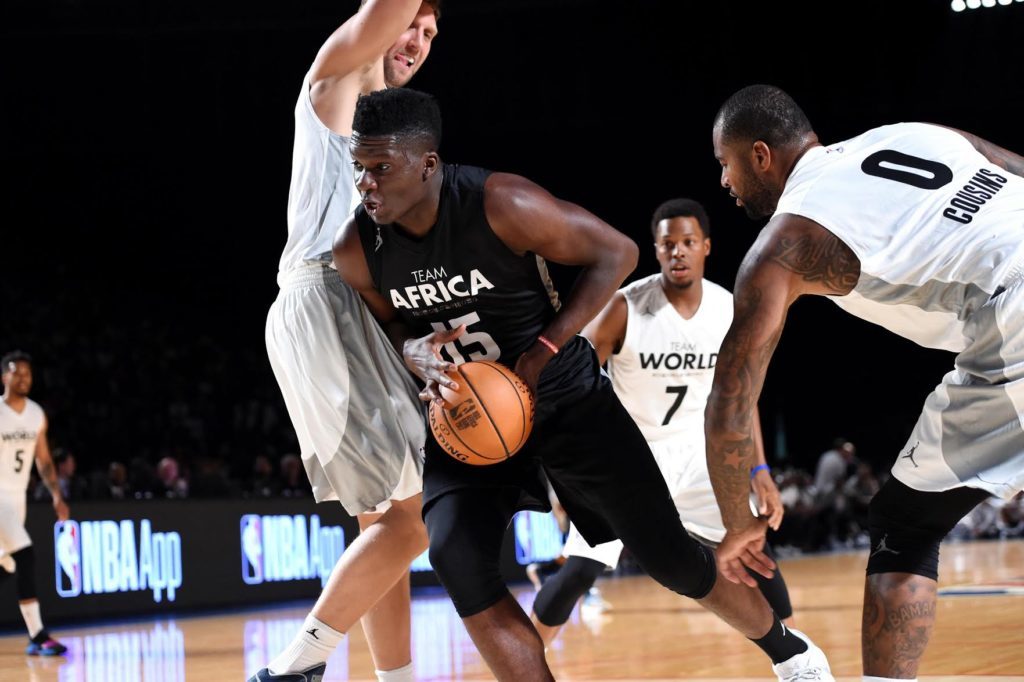 Johannesburg hosted the 2017 NBA Africa Game this Saturday to end a week that brought all the continents together to show Basketball really has no borders.

Congo’s own NBA legend Dikembe Mutombo was on finger-wagging hand to represent for this tournament…but this time the defensive great did not suit up alongside one of the greatest centers of all-time (home nation or not), Hakeem Olajuwon in the second half of this exhibition game like the last and inaugural one in 2015. Sudanese and Great Britain All-Star and Olympic ambassador and Los Angeles Laker Luol Deng captained the home nation team that hosted the rest of the world.

And despite Team Africa coming up short in their game as Team World beat them 108-97, they still held the games Most Valuable Player under Johannesburg’s Ticketpro Dome. With 28 points and 9 rebounds game MVP Victor Oladipo of the Indiana Pacers balled out from tip to buzzer and again showed that the recently Paul George added OKC Thunder team lead by 2016/2017 NBA season MVP Russell Westbrook would have had a big three like Kevin Durant and James Harden if they never traded him.

Still when it came to the rest of the world, Detroit Piston Andre Drummond lead the way with a dominant double/double of 14 points and 13 rebounds. New New Orleans Pelican DeMarcus Cousins also had a big night and double/double in the paint with 11 points and 10 rebounds. In fact there was high scoring across the board…or should we say world?! Double figures also belonged to Jaylen Brown with 15 points and Knick Kristaps Porzingis with 14, to go with 13 apiece for Courtney Lee and Toronto Raptor Kyle Lowry and 10 points for Charlotte’s Kemba Walker.

Must Read:
2016 NBA Playoffs: Raptors-Heat Who Will Win & Why

The World vs Africa epic event had it all and highlighted elite NBA talent, young and old, legend and legacy making. From Dallas Maverick Dirk Nowitzki to Portland Trail Blazer C.J. McCollum (8 points). Even Denver Nuggets rising star Emmanuel Mudiay (pictured) nearly clinched game MVP and attained a triple/double with game finals of 22 points, 9 assists and 8 rebounds off the glass boards. In a game full of doubles a triple from him surely would have earned him those three little letters.

But in one week, this one game, in this one continent and one nation brought this one world together. So much more than this and bigger than basketball, NBA Africa is now a yearly event that continues to bring more than just the game to the wider world. It’s an opportunity for so much more too. As Deke stresses, “65% of the South African continent is under 16”, if they can get their hands on a basketball it can only be a good thing…

In this article:Featured, NBA, NBA Africa 2017